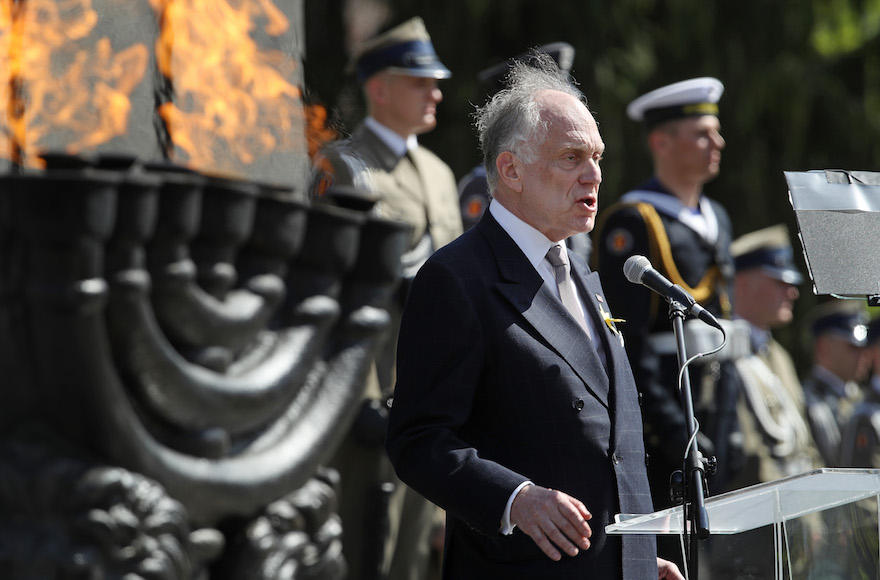 Ronald Lauder speaking next to a lit menorah at a memorial to the Warsaw Ghetto Uprising in Warsaw, Poland, April 19, 2018. (Sean Gallup/Getty Images)
Advertisement

(JTA) — It’s gotta hurt when the guy who used to fund your political career writes two op-eds criticizing you in The New York Times.

On Monday, Netanyahu was the target of a scathing column by Ronald Lauder, the cosmetics heir who heads the World Jewish Congress. Lauder lamented Israel’s recent nation-state law, which Netanyahu defends as a safeguard of Israel’s Jewish character but critics see as a slap in the face to the country’s minorities. Lauder wrote that Israel’s turn to the nationalist right is betraying its — and the Jewish people’s — commitment to democratic, humanistic ideals.

“The Jews of the new era have fused our national pride and religious affiliation with a dedication to human progress, worldly culture and morality,” Lauder wrote. “Conservatives and liberals, we all believe in a just Zionism and a pluralistic Judaism that respects every human being. So when members of Israel’s current government unintentionally undermine the covenant between Judaism and enlightenment, they crush the core of contemporary Jewish existence.”

It’s the second time Lauder has taken to the pages of The Times to lambaste Netanyahu’s agenda. In March, he lamented the demise of the two-state solution under Netanyahu and the power of Orthodox parties in Israel, warning that “[b]y submitting to the pressures exerted by a minority in Israel, the Jewish state is alienating a large segment of the Jewish people.”

Lauder may fear Netanyahu’s policies now. But without Lauder’s support, it’s possible Netanyahu never would have been prime minister at all.

In 1996, the first time Netanyahu ran for the office, he was a major underdog facing a 30-point deficit to incumbent Shimon Peres. Yitzhak Rabin, Israel’s prime minister, had been assassinated months earlier by a Jewish extremist opposed to the Israeli-Palestinian peace process.

Beyond the national sympathy for Rabin’s Labor Party, some saw Netanyahu as complicit in the incitement that led to the assassination. A month beforehand, he participated in an anti-Rabin rally where some people waved photos of Rabin in an S.S. uniform and chanted that he was a traitor. It was Peres’ election to lose.

Enter Lauder, a Netanyahu ally since the man nicknamed Bibi was Israel’s ambassador to the United Nations in the 198os. Lauder reportedly was a major donor to Netanyahu’s 1996 run. More crucial, he brought Republican campaign strategist Arthur Finkelstein to work on the campaign.

Finkelstein came up with the slogan “Peres will divide Jerusalem” in peace negotiations — and it worked. A stark attack ad, complete with a black screen, red text and ominous narration, warned that Peres had failed while a Netanyahu victory would mean a “secure peace.” A string of suicide bombings in the weeks before the election damaged the public’s faith in Peres, and Netanyahu won in a shocking upset, beating Peres by 1 percent.

Lauder remained in Netanyahu’s corner for more than a decade, at one point even offering to buy every unsold copy of one of Netanyahu’s books. In 1998, Netanyahu enlisted Lauder to pass on sensitive messages to then-Syrian President Hafez Assad in a failed attempt to broker a peace pact.

During Netanyahu’s 1999 re-election campaign, when Lauder chaired the Conference of Presidents of Major American Jewish Organizations, the mogul praised Netanyahu’s economic policies in a speech to the Shalem Center, which some took as an endorsement of his candidacy.

Police investigating Netanyahu for corruption reportedly questioned Lauder last year about gifts he has given the prime minister.

So why the falling-out? In 2011, Israeli Channel 10 aired an unflattering investigation into Netanyahu’s wife, Sara, accusing her of an inappropriately extravagant lifestyle. Lauder has a partial stake in the channel, but refused to pressure Channel 10 to drop the segment.

Since Trump took office, Lauder reportedly has tried to use his rapport with Trump, Netanyahu and Palestinian Authority President Mahmoud Abbas to restart peace talks. But the effort so far has gone nowhere.

So now Lauder has taken twice to the op-ed pages of The New York Times, slamming the man he once helped bring to power.

“Israel is a miracle,” Lauder wrote on Monday. “The Jews of the diaspora look up to Israel, admire its astonishing achievements and view it as their second home. However, today some wonder if the nation they cherish is losing its way.”