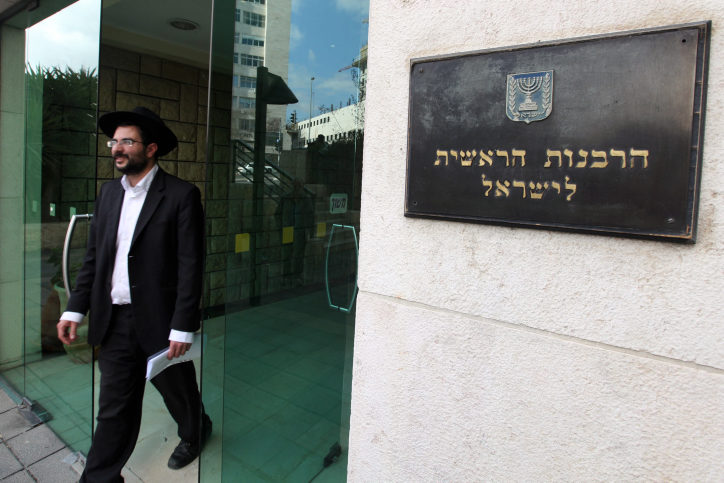 The Israeli Chief Rabbinate, pictured above, does not recognize non-Orthodox conversions, posing problems for Reform and Conservative converts who want to marry in Israel. (Flash90)
Advertisement

The building of the Chief Rabbinate of Israel is located in Jerualem. (Flash90)

JERUSALEM (JTA) — The attorney general of Israel said it would end the Chief Rabbinate’s monopoly on kosher certification if the government agency does not comply immediately with a 2017 Supreme Court ruling requiring it to end the long-time practice in which restaurants and others directly pay the salaries of government inspectors.

Avichai Mandelblit said that unless the Chief Rabbinate meets the September deadline imposed by the court requiring the establishment of an alternative system, he could not continue to enforce the law that prohibits independent kosher supervisory agencies from operating in Israel, according to The Times of Israel.

The court had ruled that the current system creates unacceptable conflicts of interest.

In response to Mandelblit, the kashrut supervisors said that efforts to comply with the court’s decision had been stymied by the Finance Ministry.

The Chief Rabbinate has long faced allegations of widespread corruption; the Mandelblit ultimatum comes only days after one of its senior kashrut officials was arrested on bribery charges. He was accused of “receiving on a large number of occasions bribes and other benefits in exchange for benefits he illegally gave to others as part of his duties.”

Several other unnamed suspects had been arrested previously for allegedly taking bribes in order to fast-track the certification of food products being imported from abroad.

Last year, the state comptroller issued a report alleging widespread fraud that went so far as to call into question the kosher status of establishments certified by the Chief Rabbinate. According to the report, a significant number of kosher inspectors were claiming to have worked for an unreasonable period of time at large numbers of restaurants, raising questions as to whether or not they were actually doing any of the work.

According to The Jerusalem Post, one inspector claimed that he was supervising 18 businesses — a workload that would have required him to spend 27 hours a day on the job. Such cases, the comptroller’s report alleged, “arouse the suspicion of false allocation of supervision hours” and that inspectors were being paid for work that “could not have been carried out.”

A number of private organizations, such as Tzohar, have attempted to break the state monopoly on kashrut in recent years.