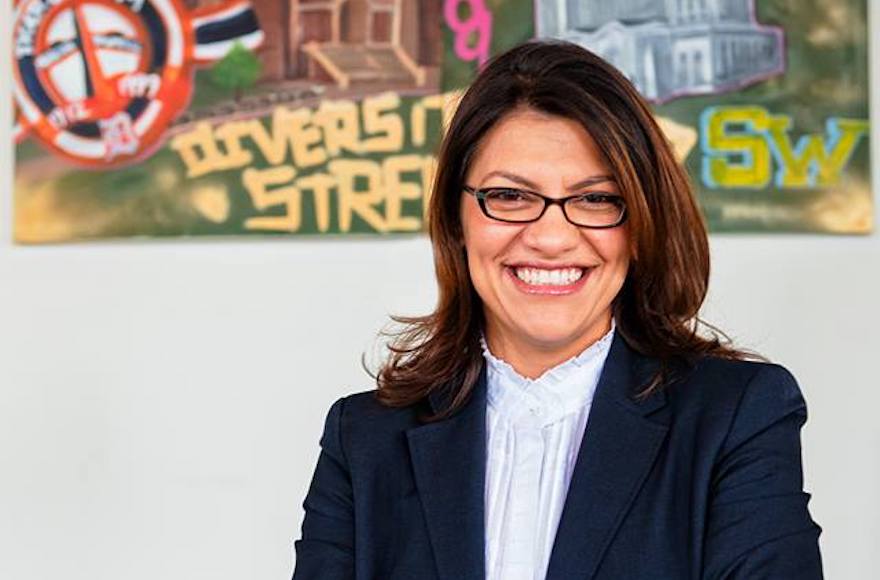 (JTA) — J Street has withdrawn its endorsement of Rashida Tlaib, a Democratic candidate for Congress in Michigan who recently called for a one-state solution to the Israeli-Palestinian conflict.

Tlaib, who is the daughter of Palestinian immigrants, also called for a reduction in foreign aid to Israel. She is likely to win her Detroit-area district.

J Street, the liberal Mideast policy organization, advocates for a two-state solution to the conflict, among other things. Tlaib had previously received the endorsement of the lobby’s JStreetPAC based on her support for two states.

“After closely consulting with Rashida Tlaib’s campaign to clarify her most current views on various aspects of the Israeli-Palestinian conflict, we have come to the unfortunate conclusion that a significant divergence in perspectives requires JStreetPAC to withdraw our endorsement of her candidacy,” read a statement from J Street Friday afternoon.

“While we have long championed the value of a wide range of voices in the discussion of the conflict and related issues, we cannot endorse candidates who come to the conclusion that they can no longer publicly express unequivocal support for a two-state solution and other core principles to which our organization is dedicated,” the statement said.

In a Tuesday interview with In These Times magazine, Tlaib endorsed a one-state solution and supported the free speech rights of BDS activists, who push for Boycotts, Divstment and Sanctions against Israel.

“One state,” she said in response to a question about whether she supports a one- or two-state solution. “It has to be one state. Separate but equal does not work. I’m only 42 years old but my teachers were of that generation that marched with Martin Luther King. This whole idea of a two-state solution, it doesn’t work.”

“Absolutely, if it has something to do with inequality and not access to people having justice,” she said. “For me, U.S. aid should be leverage. I will be using my position in Congress so that no country, not one, should be able to get aid from the U.S. when they still promote that kind of injustice.”

J Street praised her presumptive election as “a historic milestone for the Palestinian-American community and for the United States as a whole.”

“We strongly support and are encouraged by her commitment to social justice, and we are inspired by her determination to bring the voice of underrepresented communities to Capitol Hill,” the statement said. “We wish her and her campaign well, and we look forward to a close working relationship with her and her office when she takes her seat in Congress next year.”