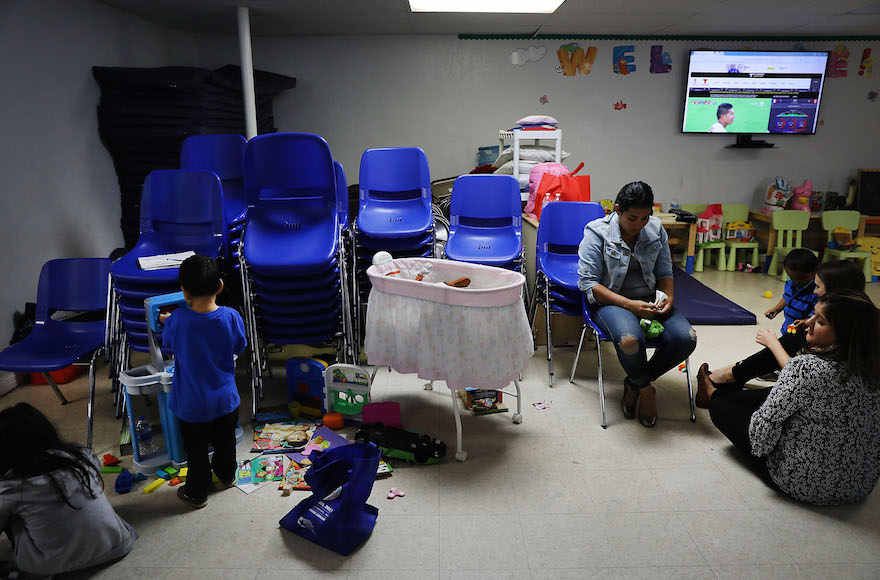 (JTA) — A delegation of Jewish leaders from 17 organizations is visiting detention and migrant facilities on the U.S.-Mexico border.

The 27-person delegation visited detention centers in San Diego on Tuesday and is traveling to asylum-seeker shelters in Tijuana, Mexico, on Wednesday.

The trip, which is being organized by the Anti-Defamation League and the Jewish refugee aid group HIAS, includes meetings with American and Mexican government officials, immigration attorneys and humanitarian workers. Among the participants are representatives from three Jewish movements — Reform, Reconstructionist and Conservative — as well as groups such as the American Jewish World Service, the Jewish Council on Public Affairs and J Street.

I’m on the ground today with @HIASRefugees heading to the border to bear witness to the crisis at the border & stand in solidarity with immigrants and refugees. #JewsAtTheBorder pic.twitter.com/kEIeKOGdRa

Mark Hetfield, CEO of HIAS, described the visits to detention centers and courthouses where migrants are being tried on charges that they entered the country illegally.

“It’s heartbreaking to see the way the United States is treating immigrants. It’s not treating them like human beings,” he told JTA in a phone interview from Tijuana.

Hetfield, a former immigration lawyer, said members of the delegation witnessed migrants being tried in a court as a group and that some who pleaded guilty to criminal charges lacked proper understanding of the consequences.

“It’s really troubling in terms of the lack of due process and the lack of understanding that people have as they’re going through and pleading guilty to these criminal proceedings,” he said.

We visited SW Key detention center: 65 unaccompanied minors, who have endured dangerous journeys and are arrested at the border. They are incarcerated. They have no freedom of movement. And they are just children. Hard to keep it together. #JewsAtTheBorder @jstreetdotorg pic.twitter.com/BJt3UzSTAu

Nancy Kaufman, CEO of the National Council of Jewish Women, said visiting a detention center for unaccompanied minors, which held children as young as 6 years old, was “eye opening.”

Though she described the shelter as “clean and decent” and the staff as “very caring,” she had concerns about the conditions.

“I asked if they go to school. They have school there, but I don’t know how you have meaningful educational programs for that kind of range of kids,” she said.

Kaufman referenced the Holocaust in speaking about the importance of the trip.

“As Jewish leaders, we need to bear witness. We all committed after the Holocaust to ‘Never again’ — we meant it,” she said. “I think we all live our lives with the belief that every person is made in the image of God, ‘b’tzelem Elohim,’ and should be treated with dignity and respect.”

Jonathan Greenblatt, CEO of ADL, called the trip “a moral imperative” in a statement to JTA.

Many Jewish groups have joined progressives and some conservatives in criticizing President Donald Trump’s immigration policies, including his executive orders banning citizens from some Muslim-majority countries from entering the United States and the since-rescinded policy of separating migrant families at the border.

Last week, HIAS organized a letter to Trump urging him to raise the cap on refugees admitted into the country to at least 75,000. The letter was signed by leaders of 36 Jewish groups. Trump set the cap for 2018 at 45,000, a historic low, and is considering a further decrease, The New York Times reported earlier this month.