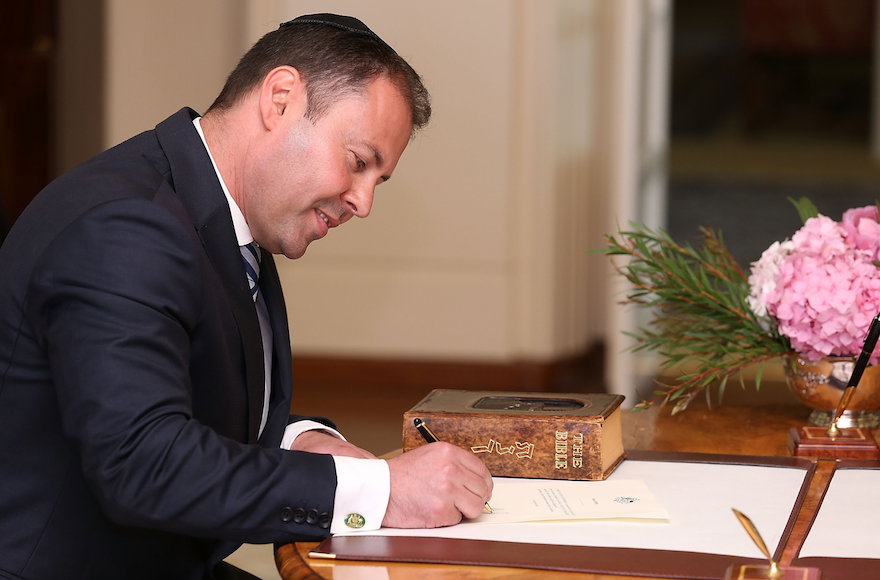 (JTA) — Josh Frydenberg, Australia’s environment minister, has been appointed to the influential position of the country’s treasurer following a cabinet reshuffle.

Frydenberg, 47 swore his oath of office Thursday in parliament while wearing a kippah and placing his right hand on a copy of the Hebrew Bible. He received the promotion following the implosion of former prime minister Malcolm Turnbull’s cabinet over dissatisfaction within his party and beyond with his energy policies.

Senior cabinet ministers Mathias Cormann, Michaelia Cash and Mitch Fifield had earlier told Turnbull that he had lost his government’s support and must hold a ballot of conservative Liberal Party lawmakers to elect a new leader quickly. Turnbull resigned Thursday.

Turnbull was replaced by Scott John Morrison, the Leader of the Liberal Party. Frydenberg was promoted in the reshuffle to deputy leader, making him the ruling party’s second most senior person.

Frydenberg was elected to parliament in 2010, representing his constituency of Kooyong in Melbourne.

His mother, Erica, is a psychologist who was born in Hungary and his father, Harry, is a surgeon who was born to Polish parents, according to 9 News. Some family members of Frydenberg survived the Holocaust, including his great aunt.

Frydenberg grew up in the well-to-do suburb of Kew, in inner Melbourne, where he attended Bialik and Mount Scopus Colleges.

As a teenager, Frydenberg had aspirations of being a professional tennis player.

He wanted to drop out of school, but his parents refused.

After completing Law and Economics degrees at Monash University, Frydenberg was offered a scholarship to Oxford University from the Commonwealth Scholarship Commission in the United Kingdom.

He completed a Master of Philosophy degree in International Relations. Upon his return, he became a lawyer in Australia. He has also worked for a time as a cattle herder on a farm in the country’s south.

Outside of politics, Frydenberg keeps up his tennis, but is also a keen photographer.

According to his website, the new Liberal Deputy Leader, held his first exhibition at a gallery in Richmond in 2008.