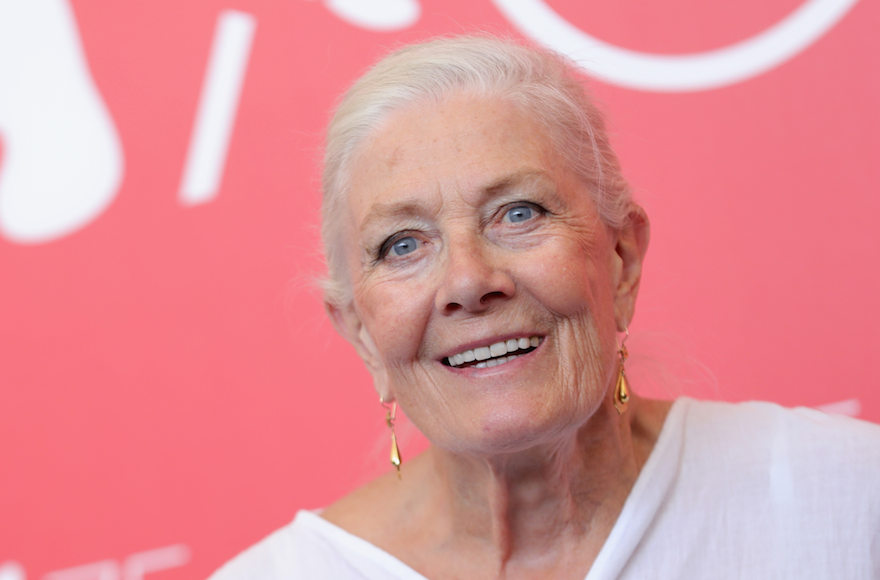 (JTA) — Vanessa Redgrave is unapologetic for referring to “Zionist hoodlums” during her Academy Award acceptance speech 40 years ago.

On Thursday, the veteran actress told the Hollywood Reporter in an interview ahead of receiving a lifetime achievement Golden Lion Award from the Vienna Film Festival that she felt a responsibility to speak out no matter the consequences.

Redgrave, 81, was referring in her remarks at the 1978 Oscars to the members of the Jewish Defense League who objected to her funding and narrating “The Palestinian,” a 1977 documentary about the Palestinians’ situation and the activities of the Palestinian Liberation Organization.

She received the best supporting actress Oscar for her performance in the 1977 film “Julia,” in which Redgrave played the title role — a woman murdered by Nazis prior to World War II for her anti-fascist activism.

Following her nomination, members of the JDL burned her in effigy and allegedly offered a bounty on her head. There was a firebombing at one of the theaters that screened the documentary. The JDL also picketed the Academy Awards ceremony where she received her Oscar opposite pro-PLO demonstrators.

“In the last few weeks you have stood firm and you have refused to be intimidated by the threat of a small bunch of Zionist hoodlums, whose behavior is an insult to the stature of Jews all over the world, and to their great and heroic record of struggle against fascism and oppression,” Redgrave told her supporters during her acceptance speech.

She concluded the speech by pledging “to fight anti-Semitism and fascism for as long as I live.”

The controversial statement about “Zionist hoodlums” reportedly cost her many roles over the years.

“I didn’t realize pledging to fight anti-Semitism and fascism was controversial. I’m learning that it is,” she told the Hollywood Reporter this week.

“I had to do my bit. Everybody had to do their bit, to try and change things for the better, to advocate for what’s right and not be dismayed if immediately you don’t see results.”

Redgrave has remained true to political causes even at the twilight of her career. Last year she directed her first film, “Sea Sorrow,” a documentary about the European migrant crisis and the plight of migrants encamped outside Calais, France, trying to reach Britain. She has criticized the British government for its policies toward migrants.