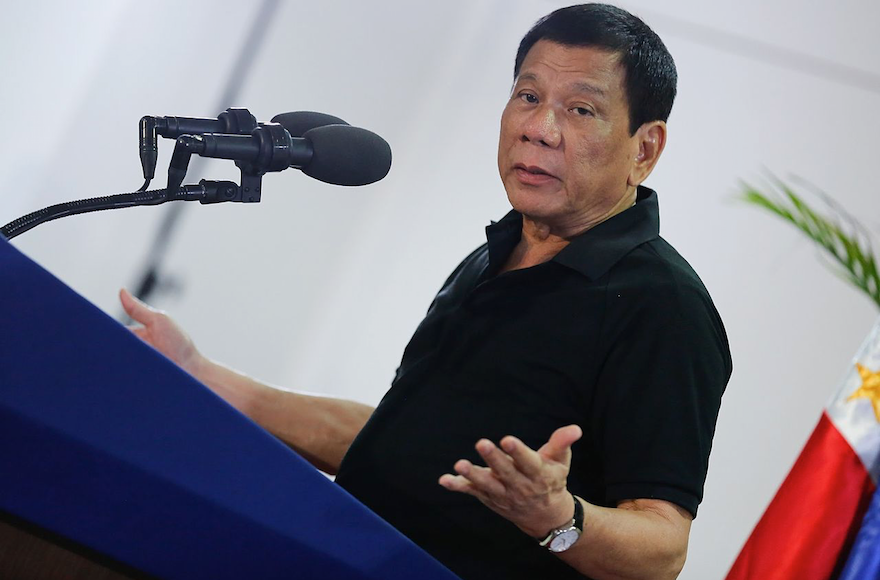 (JTA) — President Rodrigo Duterte of the Philippines, who regularly brags about murdering civilians and has compared himself to Adolf Hitler, is set to arrive in Israel on Sunday for a visit that has been widely criticized by both Israelis and Americans.

Duterte will arrive in the Jewish state on Sunday for a four-day visit before going to Jordan. He will be the first leader of the Philippines to visit Israel since the countries established relations in 1957. Duterte will take part in a ceremony inaugurating a monument to the Filipino rescue of Jews during the Holocaust, according to Haaretz.

Israel maintains a special affinity for the Philippines, as the heavily Catholic state provided refuge for nearly 1,300 Jews during the Holocaust, even offering to grant more than 10,000 visas to Jews at the time. Under President Manuel Roxas, the Philippines in 1947 also provided the tie-breaking vote at the United Nations to create Israel.

Both countries have similarly struggled to quell Islamist terrorism within their respective borders. In the Philippines, a group of Iraqi and Syrian fighters supporting the Islamic State, or ISIS, took over the city of Marawi in 2017 before it was eventually liberated. ISIS has carried out two deadly bombings in the Philippines in the last month, with military chief General Carlito Galvez Jr. now saying that “[t]he greatest threat that we have now is really ISIS.”

Nevertheless, critics worry that Israeli Prime Minister Benjamin Netanyahu is sending a bad signal by welcoming a leader whose first years in office have been called a “human rights calamity.”  Facing condemnation for a violent, extrajudicial war on drugs that has claimed some 12,000 lives, overcrowded jails and seen the harassment and prosecution of critics, Duterte has threatened to take the Philippines out of the United Nations. In March, he removed the Philippines from the International Criminal Court.

Duterte is only the most recent authoritarian leader to meet with Netanyahu, following Hungary’s Viktor Orban, Russia’s Vladimir Putin and Azerbaijan’s Ilham Aliyev, among others.

Israeli human rights groups have urged President Reuven Rivlin not to welcome Duterte, calling him a “mass murderer.” In a written appeal, Israeli lawyer Eitay Mack argued that Duterte “poses a threat not just to Philippine citizens but also the peace of the whole world.”

Mack sent his appeal to Rivlin’s office on behalf of at least 24 other human rights activists, arguing that welcoming Duterte is a tacit endorsement, enabling leaders like him across the globe.

“There is no doubt that when the international community stands idly as a leader calls for massacres, and in fact commits massacres, against specific population groups, it legitimizes other murderous leaders,” Mack wrote in his appeal.

David Horovitz, the founding editor of The Times of Israel, lambasted the visit in a lengthy op-ed.

“Rodrigo Duterte will land in Israel on Sunday night — professing friendship, seeking weaponry,” he wrote. “This man has no place here.”

Josh Kurlantzick, a senior fellow for Southeast Asia at the Council on Foreign Relations, questions the wisdom of hosting Duterte, but says that Duterte’s recent actions may serve to limit domestic terrorism.

“There have been conflicts in the Philippine south,” Kurlantzick told JTA, “but Duterte also recently inked a peace deal that would potentially create a large, autonomous region for the mostly Muslim south of the Philippines.”

Duterte, like Putin, has a prosaic interest in the Jewish state: Israel is also home to approximately 25,000 Filipinos, who have come to work legally in agriculture and domestic work before returning home. According to The Jerusalem Post, Duterte “has said repeatedly over the last couple of weeks that he was going to Israel, and then on to Jordan, to see how tensions in the region were impacting on Filipino workers. He said there are 28,000 Filipinos working in Israel, and another 48,000 in Jordan.”

Duterte has also made it plain that he plans to purchase Israeli arms. He plans to visit army bases along with his defense minister, top military officers and senior police officials. Israel has found itself in hot water previously for its arms sales, particularly in 2017 for supplying Myanmar with “advanced weapons” during the country’s ethnic cleansing campaign against the Rohingya, a Muslim minority. Israel, beyond supplying arms, may perhaps be a market for Filipino goods as well.

“For the Philippines, Israel is a possible larger market for agricultural exports and other exports, and there is also a contingent of Filipino workers in the Philippines,” Kurlantzick said. “Duterte also generally just likes to project himself on the global stage.”

There are also rumors in the Philippines that Duterte is traveling to Israel for treatment for health problems. Duterte denies such claims.

Known for his his blustery rhetoric — he called the pope a “son of bitch” for sparking a traffic jam during a visit to Manila— Duterte once favorably likened his war on drugs to Hitler’s war on Jews.

“Hitler massacred 3 million Jews,” Durterte erroneously said during a speech in his hometown of Davao City. “Now there is 3 million … drug addicts (in the Philippines), there are. I’d be happy to slaughter them. At least if Germany had Hitler, the Philippines would have [me]. You know my victims, I would like [them] to be all criminals, to finish the problem of my country and save the next generation from perdition.”

The president of the World Jewish Congress, Ronald Lauder, at the time called Duterte’s comments “revolting.”

Duterte later apologized in a speech at a Manila synagogue, correcting himself and noting that 6 million Jews were killed during the Holocaust.

Kurlantzick says that Duterte, in addition to being a flagrant violator of human rights, is an unpredictable actor and perhaps one Israel is ill advised to host.

“Duterte is highly unpredictable, so hosting him also opens yourself up to any potential more inflammatory statements on his visit,” he told JTA. “And in addition to his talk about comparing himself to Hitler to wipe out drug dealers, Duterte really is undermining the rule of law in the Philippines and overseeing massive extrajudicial killings.

“Certainly it should be questionable to host a leader with Duterte’s abysmal rights record and who has specifically made statements in which he seemed to praise Hitler.”

Jonathan Schanzer, the senior vice president of the Foundation for Defense of Democracies, was more pointed in his condemnation of the Filipino leader.

“Duterte is a blunt instrument and a thug,” he told JTA. “I don’t think Israel should host him.”