New children’s books: A magical shoebox and animals from everywhere 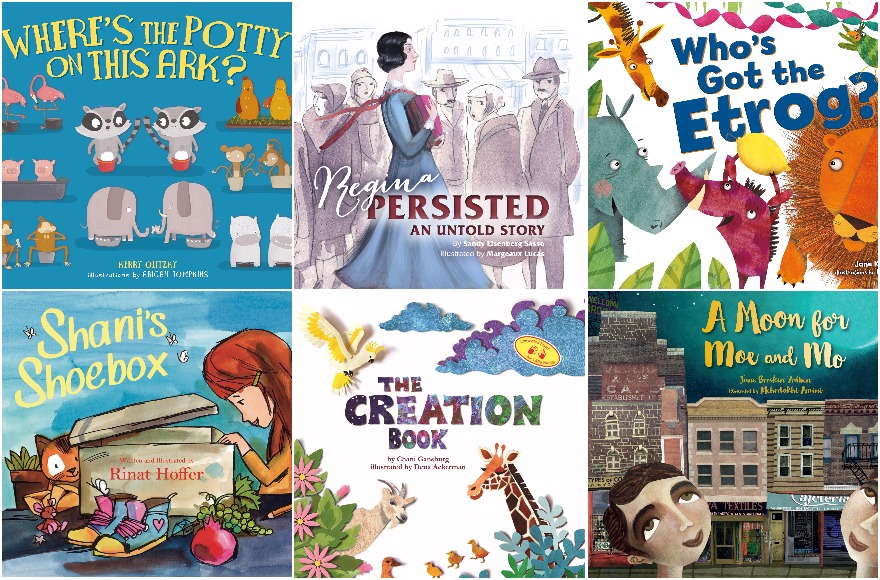 The crop of new children's book for this year features, clockwise from top left: "Where's the Potty on This Ark? (Kar-Ben); "Regina Persisted: An Untold Story" (Apples & Honey Press); "Who's Got the Etrog?" (Kar-Ben); "A Moon for Moe and Mo" (Charlesbridge); "The Creation Book" (Hachai Publishing); and "Shani's Shoebox" (Green Bean Books).
Advertisement

BOSTON (JTA) – From an African warthog to swinging orangutans, animals from all corners of the planet are featured in two stories among a new crop of children’s books at the Jewish New Year that also includes a lyrical poem of the biblical story of Creation and a magical story about an ordinary shoebox.

And a bonus: An illustrated picture book tells the story of Regina Jonas, the German Jewish girl who followed her dream to become the first woman ordained as a rabbi.

Young ones can get a jump start on the new year by turning the pages on these entertaining and informative reads.

Rosh Hashanah ushers in the High Holidays on Sunday evening.

Prepare to be enchanted! “Shani’s Shoebox,” a gently rhyming poem-story for Rosh Hashanah by the award-winning Israeli illustrator and children’s author Rinat Hoffer, will kick off the Jewish New Year on the right foot.

Shani’s “aba,” the Hebrew word for dad, surprises her with a pair of shiny new red shoes for Rosh Hashanah. Naturally she tosses aside the ordinary looking shoebox.

“It was only a box after all, nothing more,” she says.

But on Yom Kippur, Shani finds the box hidden behind stuffed animals and the next day crafts it into a sukkah. During Hanukkah, a cat discovers the discarded box and uses it to stay warm in the winter. Season to season, the box takes on a magical quality, turning up in new guises and with new uses throughout a year’s worth of Jewish holidays.

The next Rosh Hashanah, when Shani’s father fills the box with a new pair of shoes — this time they are blue — Shani is reminded of the year’s adventures.

Hoffer’s colorful, animated illustrations draw in readers with vibrant energy. In one scene, as the family prepares the house for Passover, Shani is on a stool cleaning a mirror and her dad is sweeping. It’s refreshing to have a children’s story that depicts a father in everyday roles more commonly associated with moms, like buying shoes for his kids and cleaning the house.

Even on Noah’s Ark, the animals need to use the potty. Young kids will be delightfully surprised with this inventive spin on the biblical story of Noah, from the Book of Genesis. As Noah and his wife, Naamah, greet each of the animals onto the ark, Naamah makes sure they are comfortable.

“Be careful not to hit your head on the ceiling,” she warns.

The ark comes well designed, with big potties for the elephants and little ones for smaller friends. When a baby raccoon needs to use the bathroom, Mother Hen patiently guides the young one to learn how. The animals offer an empathetic lesson in taking care of one’s body, complete with a prayer. And off they sail on the ark as the rains begin.

Kerry Olitzky’s simple, lighthearted prose is paired well with Abigail Tompkins’ playful illustrations. The book makes a timely read during the High Holidays because the story of Noah is read in synagogues on the second Shabbat following Simchat Torah, when the cycle of reading the Torah begins anew.

In this brightly illustrated story for Sukkot, Jane Kohuth weaves a playful folk-like tale told in simple poetic verse. In her rural village in Uganda, under a bright and full milk-bowl moon, Auntie Sanyu is preparing for the fall harvest holiday when Jews build a hut called a sukkah where they eat, welcome guests and sometimes even sleep. Kids follow Auntie Sanyu as she decorates her sukkah and places a lulav, the bunch of green palm branches, and a bright yellow etrog, the lemon-like fruit, on a tray to be used in the holiday rituals by Auntie Sanyu’s animal guests.  But Warthog loves the etrog so much, he doesn’t want to hand it over to the lion, parrots or giraffe. A young girl named Sara intervenes.

The story comes to life in Elissambura’s boldly colored, striking collage-style illustrations. The back page explains the history of the Ugandan Jewish community called the Abayudaya, and a glossary explains about the sukkah and lulav and terms like “Oy,vey!”

These days, when Jewish-American kids attend synagogue during the High Holidays, it’s not that unusual to have a female rabbi leading the congregation. Older kids may be fascinated to learn about Regina Jonas, the German Jew who in 1935, against many odds and strict gender roles, became the first woman ordained as a rabbi.

In this illustrated biography, which garnered a starred review from Kirkus, Sandy Eisenberg Sasso traces how Jonas persisted until religious authorities finally allowed her to take the exam to become a rabbi.  Margeaux Lucas’ illustrations capture the period, with drawings of Berlin life. Several scenes convey the young Regina as a kind of Disney-like Belle, greeting peddlers at the market, and clutching a book, daydreaming, as she crosses the street.

The afterword tells of the tragic ending of Jonas’ life in 1944, where she was killed in the Nazi death camp at Auschwitz. It would be nearly 40 years later until another woman, the American Sally Priesand, is ordained, in the Reform movement. Today there are nearly 1,000 women rabbis around the world, among them the book’s author, who herself was a trailblazer as the first woman to be ordained as a rabbi in the Reconstructionist movement. Eisenberg Sasso also is the award-winning author of the best-selling children’s book “God’s Paintbrush.”

In this gloriously illustrated, uplifting story for these times, two boys — one Jewish and one Muslim — from Brooklyn’s Flatbush Avenue meet at a Middle Eastern grocery shop. It’s a rare year when Rosh Hashanah and Ramadan coincide in the fall. As their mothers shop, the boys run through the aisles, overflowing with spices, fruits, olives and sugar-dusted candies, causing minor mischief and striking up the beginnings of a friendship. As the endearing story unfolds, the friendship blossoms and inspires their families to celebrate together.

Jane Breskin Zalben, an award-winning author, adds to her considerable collection of engaging stories that have enlivened the Jewish holidays for a generation of readers — “Beni’s Family Treasury” and “Pearl’s Passover,” among others. Mehrdokht Amini’s colorful collage illustrations burst off the page and bring the bustling neighborhood to life. Back pages explain the holidays and include recipes for each.

And There Was Evening and There was Morning
Harriet Cohen Helfand and Ellan Kahan Zager; illustrations by Ellen Kahan Zager
Kar-Ben; ages 3-8

The story of Creation unfolds in lyrical rhyming couplets in this day-by-day biblical interpretation that introduces young kids to the Jewish origin story of how the world came to be. On day one, God brought light from darkness: “Our beautiful world was underway.”

In this retelling, God is referred to in gender-neutral language. Older kids will be engrossed with Kahan Zager’s detailed illustrations, which are drawn using Hebrew letters and words. The back page is a simple illustrated dictionary of Hebrew and English words.

Bold, bright illustrations will dazzle young readers in this story of Creation told in lively rhyming couplets that evoke each day’s creation. The double-page spread for day five is a swirl of creatures from the oceans and sky: “Fins and scales. Flapping tails. A school of fish. A pod of whales.”

Verse and art are well paired in this story, which is geared to families in the haredi Orthodox community, using the word Hashem, for God, with the He pronoun.