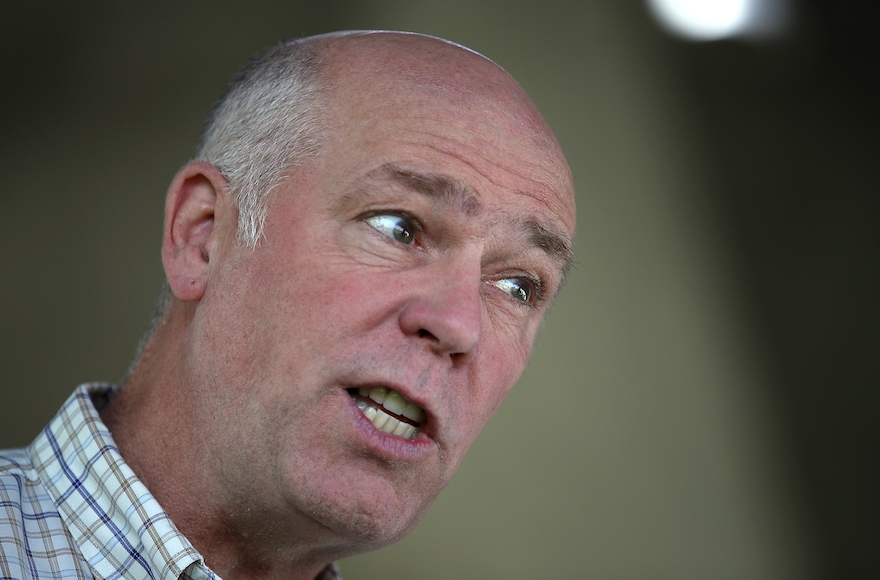 (JTA) — President Donald Trump praised a Republican congressman from Montana who body slammed a reporter on the eve of a special election.

At a rally in Billings, Montana on Thursday night, Trump hailed Greg Gianforte as a “fighter.” Gianforte physically attacked Ben Jacobs, a reporter for The Guardian, a London-based newspaper, on the eve of a special election in March 2017.

Trump said at the rally for GOP candidates in midterm elections from the state: “I’m also thrilled to be joined by Montana’s terrific member of Congress, a true champion for Montana. And I’ll tell you what, this man has fought — in more ways than one — for your state. He has fought for your state. Greg Gianforte, he is a fighter and a winner. He’s a winner. Great/ He loves your state.”

Gianforte attacked Jacobs, who is Jewish, after he asked then-candidate Gianforte about the Congressional Budget Office’s report on the Republican health-care bill.

Gianforte later apologized and announced a $50,000 donation to the Committee to Protect Journalists, part of an agreement to settle any potential civil claims. In June 2017, he was sentenced to 40 hours of community service and 20 hours of anger management, and assessed a $385 fine and a six-month suspended jail sentence by the Gallatin County justice court.