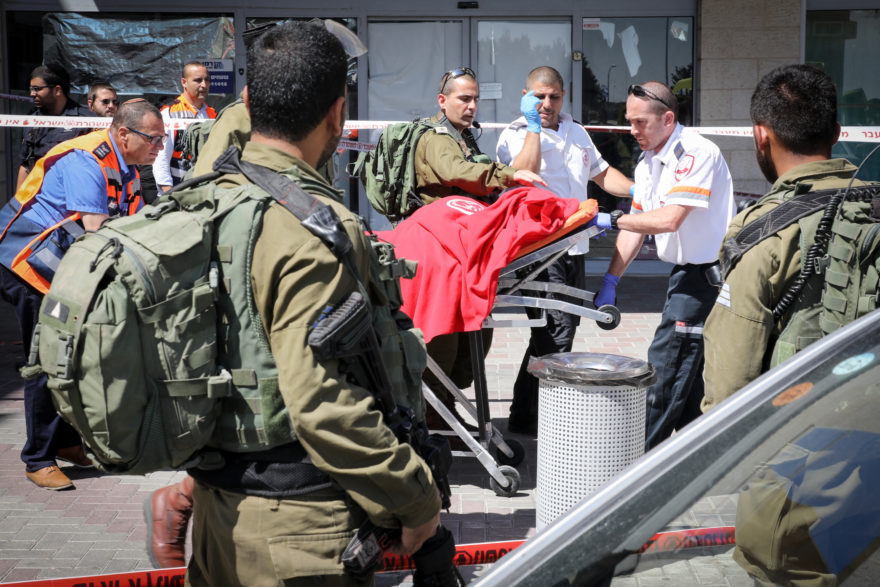 Israeli soldiers and medics at the scene of a stabbing attack by a Palestinian teen which killed American-Israeli Ari Fuld outside a mall in the Etzion bloc on Sept. 16, 2018. (Gershon Elinson/FLASH90)
Advertisement

JERUSALEM (JTA) — A father of four who was an activist for Israel was stabbed to death outside a shopping mall near Efrat, the West Bank town where he lived.

Ari Fuld, 45, a dual American-Israeli citizen, was attacked late Sunday morning by a Palestinian teen in the Etzion bloc. He chased after his attacker and shot him before falling to the ground.

The victim of today’s terror attack was 40-year-old Ari Fuld. Ari was stabbed by a Palestinian terrorist and heroically fought back chasing after the terrorist and opening fire. He succumbed to his wounds at the hospital.

May his memory be a blessing. pic.twitter.com/XlbIN7fJF8

A civilian bystander also shot at the attacker, who was identified as Khalil Jabarin, 17, from a West Bank village near Hebron.

Fuld worked for Standing Together, a nongovernmental organization that provides support for Israeli soldiers.

He died at Shaare Zedek Medical Center in Jerusalem. His attacker was taken to Hadassah Hospital Mount Scopus in Jerusalem and was in moderate condition with multiple gunshot wounds.

Haaretz cited a source close to the Jabarin family as saying that the teen informed his parents that he planned to carry out an attack at the Tomb of the Patriarchs in Hebron. The family told security forces about their son’s plan but could not find him near the tomb.

Fuld was well known for his social media posts defending Israel and its military. He was scheduled to leave in the coming weeks on a speaking tour in the United States. In addition, he reportedly was about to launch a new Israel advocacy website in English.

U.S. Ambassador to Israel David Friedman offered his condolences in a tweet.

“America grieves as one of its citizens was brutally murdered by a Palestinian terrorist,” he wrote. “Ari Fuld was a passionate defender of Israel & an American patriot. He represented the best of both countries & will be deeply missed. May his family be comforted & his memory be blessed.

In a tweet following the attack, Defense Minister Avigdor Liberman wrote that his “heart is with the Etzion Bloc. My condolences to the families of the victim. We will continue to fight terrorism with an iron fist.”