Saying Bert and Ernie were gay, a writer for ‘Sesame Street’ reopens a furry-ous debate 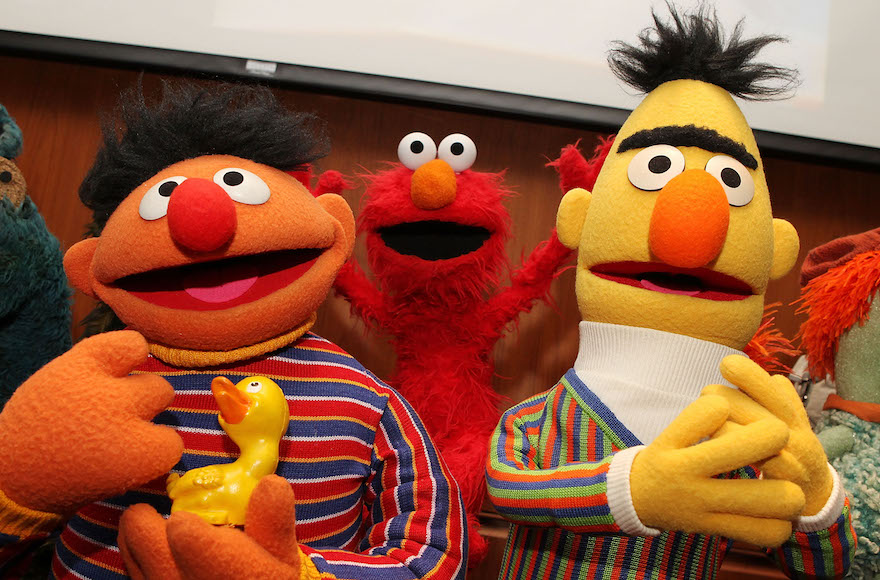 (JTA) — A former writer for the PBS children’s show “Sesame Street” said he based scripts starring the beloved characters Bert and Ernie on his own experience as one half of a gay couple.

Mark Saltzman, who is Jewish, reopened a long-standing debate over the puppets’ sexuality in a Sept. 16 interview with Queery magazine. He had worked on “Sesame Street” with his late life partner, filmmaker Arnold Glassman, starting in 1984 – some 15 years after the two characters hit the screens in the “Sesame Street” 1969 pilot program.

“So it was the Bert & Ernie relationship, and I was already with Arnie when I came to Sesame Street. So I don’t think I’d know how else to write them, but as a loving couple,” Saltzman said.

Sesame Workshops, the company that produces the show, dismissed the assertion that the characters’ relationship is homosexual.

“As we have always said, Bert and Ernie are best friends,” the company said in a statement. “They were created to teach preschoolers that people can be good friends with those who are very different form themselves. Even though they are identified as male characters and possess many human traits and characteristics (as most Sesame Street Muppets do), they remain puppets, and do not have a sexual orientation.”

Objections to the Sesame Workshop statement were swift and angry, noting that numerous characters on the show have been depicted as romantic partners and as having children.

That prompted Sesame Workshops to issue a second statement, saying that the show has “always stood for inclusion and acceptance.”

Over the years, many have speculated over the relationship of the iconic “Sesame Street” characters, who appear to share an apartment and a bedroom. “Sesame Street” was a pioneer among children’s shows in tackling social issues, often displaying progressive attitudes, including celebrating diversity.

Saltzman had never confirmed his intention to style Bert and Ernie as a homosexual couple.

Asked during the Queery interview whether “Bert & Ernie became analogs” for his relationship with Glassman, Saltzman said: “Yeah. Because how else? That’s what I had in my life, a Bert & Ernie relationship. How could it not permeate? The things that would tick off Arnie would be the things that would tick off Bert. How could it not?”

He added: “I would never have said to the head writer, ‘oh, I’m writing this, this is my partner and me.’”

“Sesame Street” has won 167 Emmy Awards and 8 Grammy Awards—more than any other children’s show.