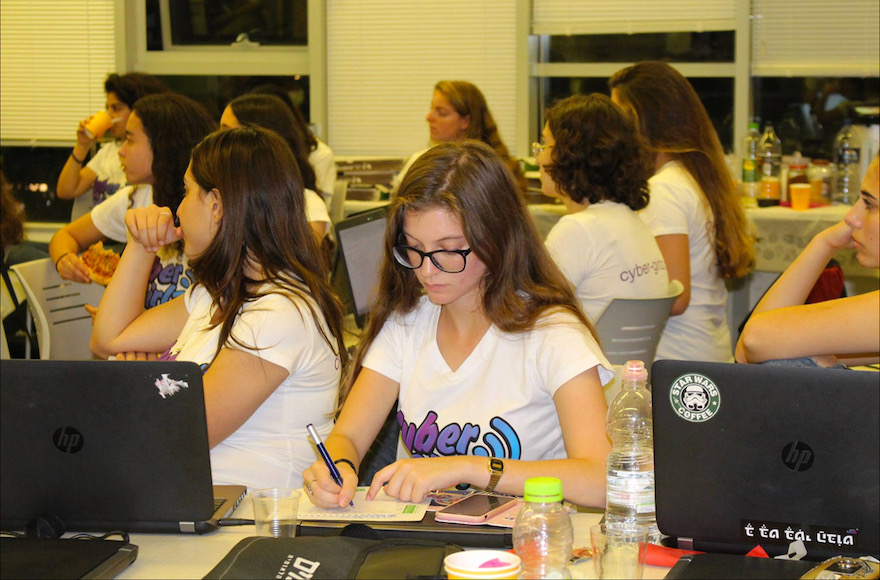 The CyberGirlz Club and CyberGirlz Community host hack-a-thons, training sessions, meetups, and events where the girls get advice and guidance from other female mentors — many of whom have served in elite technology units of the Israeli military. (Courtesy CyberGirlz)
Advertisement

This story is sponsored by Start-Up Nation Central.

As the founder of an Israeli social network startup, she recalls more than once being the only female in a room full of male business executives.

“I remember myself asking where all the other women were,” she said. “I realized then that if I wanted to change things, it’s not enough to be an entrepreneur. I also have to help cultivate other women to be entrepreneurs.”

Even now, as she pursues a master’s degree in computer science at Ben-Gurion University in Beersheba, Ben Aroya, 33, is one of only three women in her class of 30.

“The problem is that tech is not being marketed in a way that gets girls interested,” Ben Aroya said. “Girls want to do something that contributes to society, like finding a cure for cancer, but they don’t realize that technology is the best way to do that. In our society, boys tend to be more competitive. We don’t push girls to achieve higher goals.”

Ben Aroya is trying to change that.

She is the chief of content development at CyberGirlz, a program that aims to cultivate interest and skills in technology among high school girls with an aptitude for it. About 2,000 girls already participate in the CyberGirlz Club and the CyberGirlz Community, which hosts hack-a-thons, training sessions, meetups and events where the girls get advice and guidance from other female mentors — many of whom have served in elite technology units of the Israeli military.

At the moment, demand for high-tech professionals in Israel outstrips supply by about 15,000 individuals, according to Start-Up Nation Central, a Tel Aviv-based nonprofit that monitors the tech ecosystem. The need for those with specific technical skills like coding, algorithms, encryption and big data is especially pressing.

Given the centrality of the tech sector to Israel’s GDP, ensuring that there is a pipeline of capable people available to work in tech has become a national priority. More often than not, that pipeline is the Israeli military – especially the famed intelligence Unit 8200 — where tech-oriented young people get the crucial training and experience they need to become successful tech innovators.

Yet female soldiers comprised just 27 percent of all programmers in the Israel Defense Forces in 2015, the last year for which statistics were available. And only 12 percent of conscripts in the IDF’s highly competitive cyber units were women — about the same percentage as women in the high-tech industry in general.

CyberGirlz is ramping up its effort to change that with the September launch of an afterschool club in the central Israeli city of Modiin for a select group of about 60 high school sophomores and juniors. The idea is to prep them for high-skilled technology units of the IDF.

The CyberGirlz Club is jointly financed by Israel’s Defense Ministry, the Rashi Foundation and Start-Up Nation Central, which is backed by the hedge fund titan Paul Singer.

“Our aim is to bring the girls to this process already skilled, with the knowledge needed to pass the exams for Unit 8200 and serve in the military as programmers,” said Maty Zwaig, Start-Up Nation Central’s director of human capital programs. Zwaig herself was a lieutenant colonel in a computer unit within the IDF Intelligence Corps.

The girls will meet once a week for four hours over a two-year period. They’ll learn network science, coding and digital frameworks, and be trained in using complex algorithms to track Israel’s potential enemies.

Unlike conventional high school computer classes, this curriculum is focused on teaching hacker skills. The girls will practice penetration testing, which simulates cyberattacks to find potential vulnerabilities, do network analysis and learn the programming language Python. 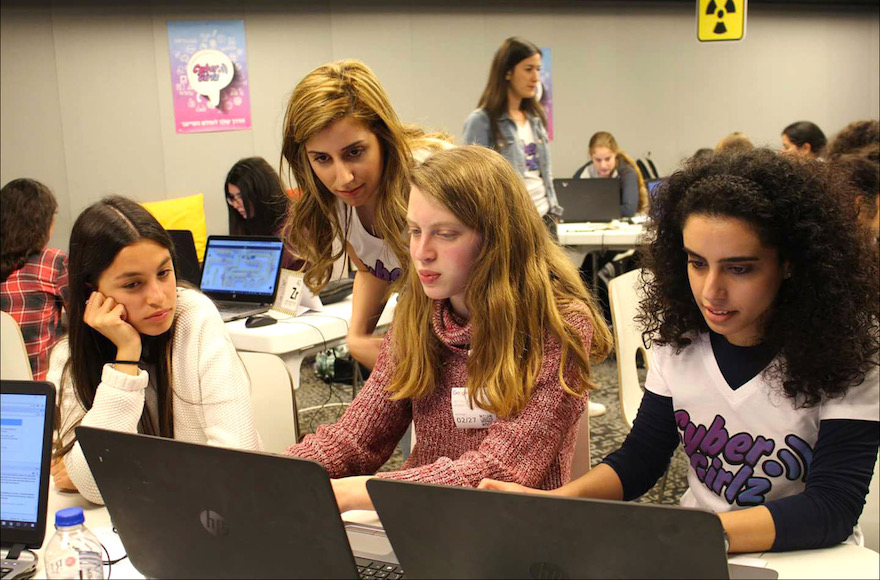 Demand for high-tech professionals in Israel now outstrips supply by about 15,000 individuals, according to Start-Up Nation Central. Programs like CyberGirlz aim to address the shortfall by recruiting more women into the field. (Courtesy of CyberGirlz)

“In order to get into these units, you need a high-level understanding of coding and math,” said Shany Kfir, human capital program manager at Start-Up Nation Central. “You need to be a geek. These people are into it since they’re 8 or 9 years old.”

Ruth Shoham is executive director of capacity building at Israel’s National Cyber Directorate, which is part of the Prime Minister’s Office. Formerly of Start-Up Nation Central, Shoham also was a colonel in the IDF — making her one of the highest-ranking women ever to serve in Unit 8200.

“When you ask a boy if he knows something, he will always tell you yes,” she said. “Girls, even when they know something, are afraid to tell you yes.”

Shoham’s last job with the IDF was overseeing the relocation of Unit 8200 to the Negev. After leaving the military in 2010, she joined IBM Israel, eventually opening IBM’s lab in Beersheba.

“We start to identify boys and girls around the 11th grade to see if they can work in cybersecurity during their army service,” she said. “Those who go through the exam have very extensive courses to learn cybersecurity. They gain a lot of experience in the IDF and then open startups. This is the ecosystem that feeds high tech in Israel.”

The Modiin CyberGirlz program is designed specifically with the needs of girls in mind, and it’s not just for those focusing on computers in high school. Theater students and humanities-minded students are welcome, too, as long as they qualify.

“We’re breaking down how girls think and customizing content so that girls will be engaged,” Kfir said. “They’re more interdisciplinary. We want to help high-school girls close the technological gaps needed in order to get accepted to the IDF’s 8200 units.”

In mid-July, the backers of CyberGirlz hosted a summer “boot camp” in Israel’s Galilee region for the 60 girls to nurture their technology skills and interests. Over a four-day period, they got to know each other and acquired the basic skills necessary to start the program in September.

“This is something that really threatens the entire Israeli economy,” Kfir said.

The Israeli government’s Council for Higher Education, which includes Start-Up Nation Central as an adviser, aims to boost the number of university computer science students over the next five years by 40 percent.

Thanks to CyberGirlz, Shoham said, “there will be more girls in 8200, on top of those already serving. We will have more people skilled in cybersecurity, and this diversity will make our high-tech industry even better.”

(This article was sponsored by and produced in partnership with Start-Up Nation Central, an Israel-based nonprofit that provides a gateway to the Israeli innovation ecosystem and strengthens Israel’s tech economy by convening government, industry, academia and NGOs to help shape policies that support Israel as a thriving innovation nation. This article was produced by JTA’s native content team.)