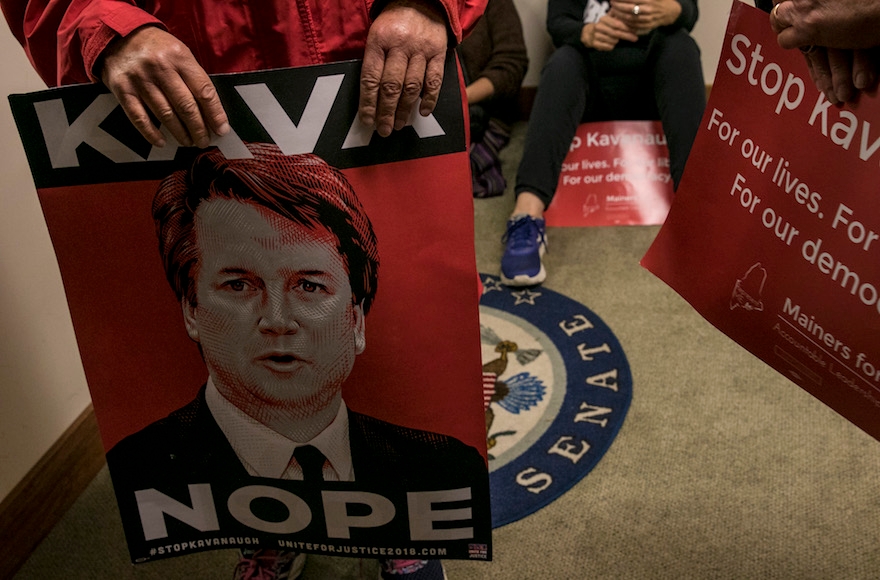 Women participate in a sit-in in Sen. Susan Collins' office in Portland, Me., to urge her to vote no on the confirmation of Supreme Court nominee Brett Kavanaugh, Sept. 28, 2018. (Sarah Rice/Getty Images)
Advertisement

The committee voted Friday to send the nomination to a full Senate vote a day after it heard testimony from Kavanaugh and Christine Blasey Ford, who has accused the federal appeals court judge of sexually assaulting her when they were in high school. Two other women have also said that Kavanaugh assaulted or acted inappropriately toward them while in high school or college.

Lawmakers, including Judiciary Committee member Jeff Flake, R-Ariz., have called for the FBI to investigate the allegations before the full Senate vote.

Among the groups criticizing the decision were the National Council of Jewish Women and the Reform movement. Those praising the vote included the Republican Jewish Coalition and the Coalition for Jewish Values.

The National Council of Jewish Women said it was “appalled” by the decision to advance President Donald Trump’s nominee to a full Senate vote.

“Today, the Senate Judiciary Committee confirmed that pushing through a nominee who will undermine the rights of women, immigrants, LGBTQ individuals, and people of color is more important than hearing survivors and investigating credible allegations,” the organization’s CEO Nancy Kaufman said in a statement.

Rabbi Jonah Pesner, director of the Religious Action Center of Reform Judaism, denounced the vote in a statement on behalf of the Reform movement.

“The Reform Jewish Movement continues to believe that Judge Kavanaugh’s elevation to the Supreme Court would significantly jeopardize the most fundamental rights, rooted in our enduring Jewish values, that we have long supported,” Pesner said. “The recent allegations of sexual assault have added urgency to our opposition.”

While the Coalition for Jewish Values said it was “happy” about the decision and called Kavanaugh “a qualified candidate,” the group also expressed support for Flake’s call for an FBI investigation into the allegations.

“It is obvious that the FBI investigation should have happened months earlier, but conducting it now will permit Judge Kavanaugh to take his seat on the Supreme Court without a cloud of suspicion,” the organization’s president, Rabbi Pesach Lerner, said in a statement to JTA.

In a statement to JTA, the Republican Jewish Coalition said it “applauds” the committee vote.

“This has been a difficult and gut-wrenching process,” RJC Executive Director Matt Brooks said. “Our thoughts are with Dr. Ford, Judge Kavanaugh and their families during this very difficult time. We hope this process can move forward now without partisan rancor.”

In a statement to JTA, the National Council of Young Israel, which represents some 135 Orthodox synagogues across the country, neither criticized nor praised the vote itself. Instead the organization criticized the process in which the allegations were revealed.

“[C]hanges should be made to first have a private hearing for these types of personal matters in order to avoid the public spectacle that ensued and the outrageous threats made against Dr. Blasey Ford and Judge Kavanaugh and their families,” said the organization’s president, Farley Weiss.