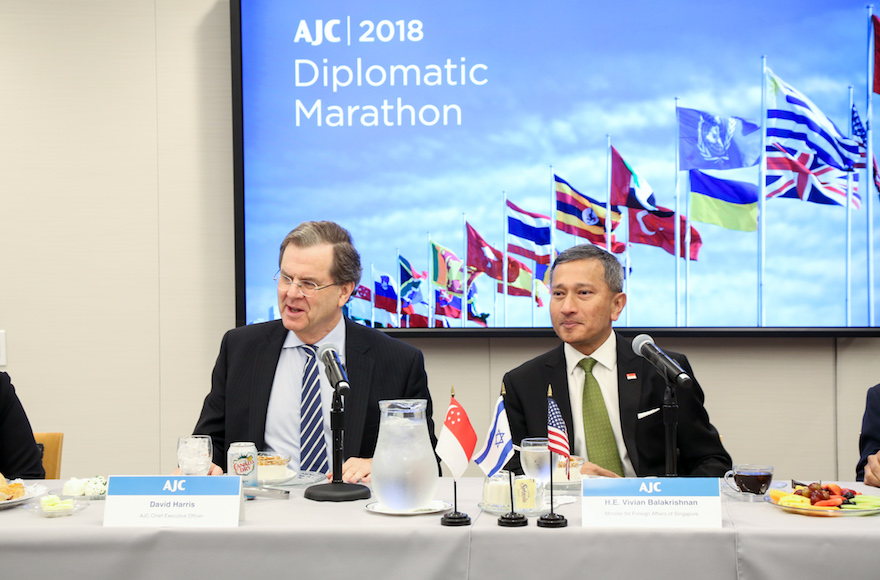 On Sept. 22, 1999, a leading Jewish group placed a full-page advertisement in The New York Times dramatically illustrating the unequal treatment of Israel at the United Nations.

The ad — timed for the start of the U.N. General Assembly, when a procession of world leaders delivers speeches at the world body’s headquarters in New York — listed on one side the 187 countries eligible to sit on the U.N. Security Council. On the other, it had the name of the one that was not: Israel.

The ad was placed by the American Jewish Committee, a century-old Jewish advocacy organization that had made the issue a mainstay of its advocacy in the 1990s. AJC pressed the matter in the marathon meetings it conducts with foreign leaders on the sidelines of the General Assembly, and Madeleine Albright, then U.S. secretary of state, circulated the AJC ad in a meeting with European foreign ministers, urging her counterparts to remedy a glaring injustice.

In May 2000, the effort bore fruit when Israel was granted membership in the Western European and Others Group, known as WEOG – thereby making it eligible to hold one of 10 rotating seats on the U.N. Security Council. In 2013, Israel’s WEOG membership was extended to Geneva, where the U.N. Human Rights Council is based.

“Diplomacy requires a flair for public relations, especially if you want to advance a new initiative,” said Dore Gold, Israel’s U.N. ambassador at the time and later the director-general of the Israeli Foreign Ministry. “And AJC brought its years of experience to the table, which made all the difference for advancing what was a very important initiative for the State of Israel.”

The WEOG campaign is one of the clearest triumphs of AJC’s diplomatic endeavors, an effort that culminates every September when the group conducts some 70 high-level meetings with visiting presidents, prime ministers and other dignitaries during the U.N. General Assembly. Known as the Diplomatic Marathon, the meetings have helped solidify the AJC’s reputation as “the State Department of the Jewish people.”

The meetings provide a unique opportunity to press foreign leaders on issues of Jewish concern, including the security of Jewish communities abroad, relations with Israel and the Iran nuclear deal.

“At the end of the day, the test of an organization is whether you’re talking to the change makers and the decision makers,” said David Harris, AJC’s CEO. “If you’re only shouting to your bleachers, that doesn’t move the needle. What matters is whether you have access to the people who have the power to move the needle. You don’t necessarily have to agree with them, but you have to have access to them.”

Since taking the helm of the organization in 1990, Harris has made attaining that access a chief focus of AJC’s work. Under his leadership, the group refocused its attention on global Jewish advocacy, including cultivating relationships with the large diplomatic corps based in New York and Washington, D.C., and with government officials around the world.

This year, over 60 countries will have met with AJC officials in New York over 10 days during the General Assembly.

In an echo of the WEOG campaign, AJC placed an advertisement in The Wall Street Journal on Tuesday illustrating Israel’s unfair treatment at the U.N. Human Rights Council: All the countries of the world were listed in one column and Israel was listed alone in another as the only nation that is the subject of an entire permanent agenda item at the council.

The following day, AJC placed an ad in The New York Times highlighting the importance of the transatlantic partnership of the United States, Canada and Europe as bulwarks of post-World War II peace based on a shared commitment to democracy, NATO and the European Union. In a sign of the group’s stature among world leaders, the statement was signed by a number of prominent names, including Albright, former British premier Tony Blair, former Vice President Joe Biden and ex-Secretary of State George Shultz.

“People talk to us because they know that other people are talking to us,” said John Shapiro, AJC’s president. “That may sound sort of silly, but the reality is today all these countries know that a lot of other countries are speaking to AJC, so they want to speak to us. It becomes a virtuous cycle.”

Kim Pimley, an AJC board member who chairs the group’s international relations commission, said the organization is not above challenging foreign officials when necessary. She recalled one “jaw-dropper” of an exchange with a European official who had made a friendly gesture toward an “unsavory actor.” AJC raised the issue in their meeting and the official acknowledged the error.

“We can talk about some pretty tough stuff,” Pimley said. “But we can do it civilly, which is a nice break from our national conversation, which is a mess.”

AJC leaders are understandably discreet about the Diplomatic Marathons, which typically include meetings with some Arab leaders who are less than friendly to Israel in their public comments. But their fingerprints are evident in a number of important diplomatic developments in recent years.

In early 2016, Israel concluded a trilateral partnership with Cyprus and Greece during a summit meeting in the Cypriot capital. AJC had worked for years to deepen ties among the three nations, organizing a number of missions to Athens and Nicosia and cultivating ties with Hellenic groups in the United States. That summer, the group sent a mission to Cyprus and, in September, on the sidelines of the annual U.N. meeting, gave its Light Unto the Nations Award to Cypriot President Nicos Anastasiades.

The following year, India’s then-foreign secretary, Subrahmanyam Jaishankar, spoke to a private audience of 125 Jewish leaders at an event organized by AJC at the opening of that year’s Diplomatic Marathon. The organization long had advocated for closer ties between Israel and India, maintaining a full-time representative in New Delhi, cultivating relationships with Indian-American groups and conducting frequent visits over the years. When Narendra Modi became the first Indian prime minister to visit Israel in the summer of 2017, AJC had a private meeting with him and arranged various events on the sidelines of the visit.

“We have been involved in the Indian space for a quarter-century,” said Jason Isaacson, AJC’s associate executive director for policy and managing director of government and international affairs. “We opened doors and created common agendas with Indian political figures, with Indian think tanks. We did as much as we could to showcase the possibilities of a relationship with Israel.”

That kind of painstaking incrementalism, Harris says, is a key part of AJC’s success in winning access to global leaders.

This article was sponsored by and produced in partnership with the American Jewish Committee (AJC), the leading global Jewish advocacy organization that harnesses its unparalleled access to government officials, diplomats and other world leaders to combat rising anti-Semitism and extremism, defend Israel’s place in the world, and safeguard the rights and freedoms of all people. This article was produced by JTA’s native content team.