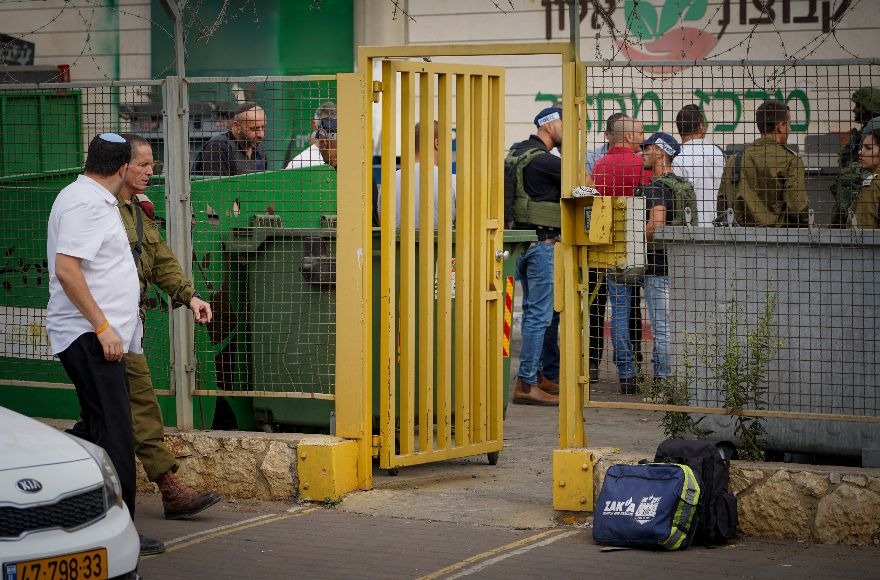 JERUSALEM (JTA) — Two Israelis were killed and another injured in a terror attack in a West Bank industrial area that employs thousands of Palestinian and Jewish workers.

The attack in the Barkan Industrial Park factory took place shortly before 8 a.m. Sunday, at the beginning of the work week. The gunman, a 23-year-old Palestinian who remains at large, had been employed at the factory for several months and reportedly knew the two dead victims — a man and a woman from central Israel. Both had been tied up and shot at close range; they died of their injuries at the scene.

A woman in her 50s was taken to a nearby Israeli hospital in serious but stable condition, according to Magen David Adom.

Kim Levengrond Yehezkel, 29, of Rosh Haayin, and Ziv Hajbi, a 35-year-old father of three from Rishon Lezion, were identified as the two people killed.

The attack is reported to be the first of its kind in the Barkan Industrial Park.

The gunman used an assault rifle and was caught on security cameras leaving the factory. He lived in the village of Shweika, near the West Bank city of Tulkarem, and had a permit to enter Barkan for work, but it is not known how he was able to bring the weapon into the industrial zone. He reportedly left behind a suicide note with a friend.

The Israel Defense Forces is searching for the attacker.

“This is a serious terror attack,” IDF spokesman Ronen Manlis said in a statement. “He may have had other motives, but we unequivocally state that this is a terrorist attack, in light of other findings we have.”

Manlis said that special units have been brought in to help capture the shooter.

He called the Barkan Industrial Zone, which is home to 160 factories, “an area of ​​coexistence in which Palestinians work daily with a permit alongside Jews. We are examining the events of the day, but it is clear to all of us that preserving this coexistence is part of the IDF’s mission, and we will continue to do so.”

“The security forces are in pursuit of the reprehensible murderer,” he said. “I am certain that they will apprehend him and I am also certain that we will deal with him to the fullest extent of the law and quickly.

President Reuven Rivlin in a statement said “This was not only an attack on innocent people going about their daily lives, it was also an attack on the possibility of Israelis and Palestinians co-existing peacefully. I call on the Palestinian leadership to condemn the attack and to use the forces at their disposal to capture the terrorist and those who aided him.”

The Hamas terror organization called the attack “a new chapter in our resistance in the West Bank.”

“The incident has proven that any attempts of the Palestinian Authority to normalize relations with the Zionist occupier are unsuccessful,” it said in a statement.

An Islamic Jihad spokesman, Daoud Shehab, said the attack is a reply to “Israel’s war crimes in Gaza, Jerusalem, the Bedouin village of Khan al-Ahmar and the damage Israel causes to the Al-Aqsa mosque. We call on our people to rise up against the settlements terror until the West Bank is freed from it.”