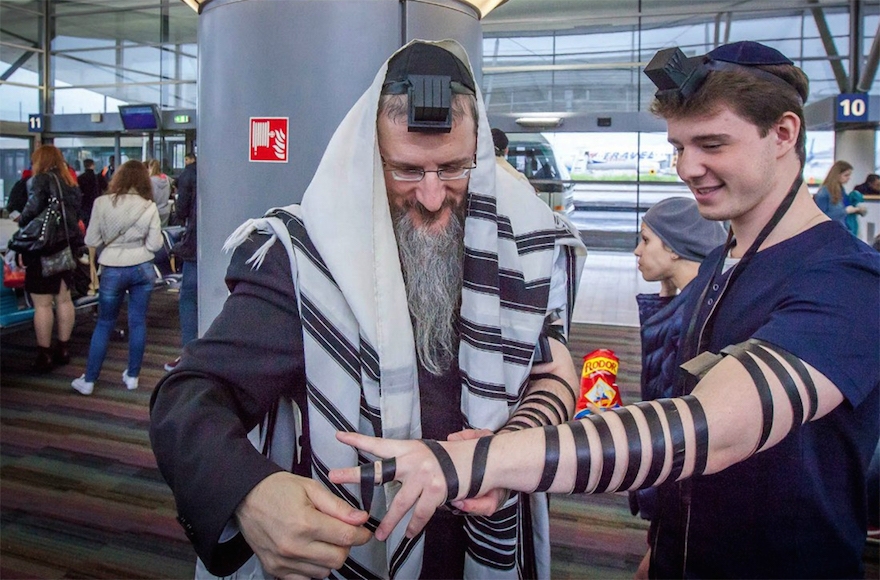 Rabbi Berel Lazar placing tefillin on a participant of the Eurostars trip to France in 2015. (Courtesy of Yachad)
Advertisement

(JTA) — Jewish men who wrap leather straps around their arm as part of their daily morning prayers may also be protecting themselves from the worst effects of heart attacks, a study found.

A pilot study by researchers at the University of Cincinnati College of Medicine found that regular users of tefillin, or phylacteries, may receive cardiovascular health benefits though remote ischemic preconditioning — that is, briefly restricting blood flow and oxygen to the heart and then restoring it.

The results of the study were published last month online in the American Journal of Physiology-Heart and Circulatory Physiology.

The study involved 20 Jewish men from the Greater Cincinnati area including nine who wore tefillin daily and 11 who did not. A leather strap is wrapped tightly around either the right or left arm for about half an hour during morning prayers six days a week, often tight enough to leave grooves in the skin for a few minutes after they are removed. They are not worn on Shabbat.

The researchers measured participants’ vital signs, drew blood for analysis of circulating cytokines and monocyte function and also measured blood flow in the dominant arm which is not wrapped with the tefillin. Blood flow was higher for men who wore tefillin daily and improved in all participants after wearing it just once as part of the study.

The study was headed by Jack Rubinstein, UC Health cardiologist and associate professor in the Division of Cardiovascular Health and Disease. He said in an article posted on the university’s website that the binding of the arm and the discomfort users often report may serve as a form of preconditioning and offer a substantial degree of protection against acute ischemic reperfusion injury – when a section of the heart is deprived of oxygen and then damaged when re-oxygenated — that occurs as a result of a heart attack.

Ischemic preconditioning essentially mimics the effects of exercise by placing the heart and vessels under light stress.

“We found people who wear tefillin in either the short or long term, recorded a measurable positive effect on their blood flow. That has been associated with better outcomes in heart disease,” Rubinstein said.

Israeli studies have shown that Orthodox men have a lower risk of dying of heart disease compared to non-Orthodox men.