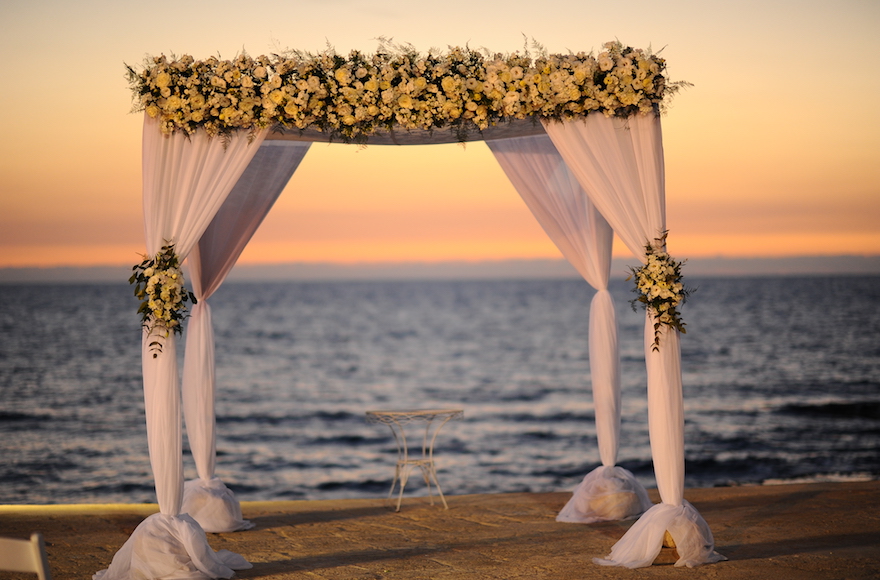 (JTA) — The Conservative movement’s rabbinical association will allow its rabbis to attend intermarriages.

The policy change, which reverses a ban of four decades, was made last week in a vote of the Rabbinical Assembly’s Committee on Jewish Law and Standards, which determines the centrist movement’s Jewish legal rulings.

While Conservative rabbis still may not officiate in any way at marriages between a Jew and a non-Jew, they can now attend those weddings without fear of punishment. The ban on attending an intermarriage, which was instituted in 1972, was not enforced, although many rabbis said they heeded it.

“Clergy of the Conservative/Masorti movement may officiate at weddings only if both parties are Jewish,” the law committee’s ruling reads. “Officiation means signing documents or verbal participation of any kind. Attendance as a guest at a wedding where only one party is Jewish is not included in this Standard of Religious Practice.”

The fact that attendance was “not included” in the standard means that it is not prohibited by the movement, JTA has learned. A decision of the law committee does say Jewish law prohibits attending a interfaith wedding, but rabbis who do so will no longer face any consequences from the movement.

JTA has reached out to the Rabbinical Assembly for comment.

The change signals a new step in the movement’s grappling with the question of intermarriage, which has divided its ranks of late. Rabbis have been expelled or chosen to leave the movement in order to conduct intermarriages, and others have complained of the emotional pain caused because they have been prohibited from attending the intermarriage of relatives.

But the movement has also taken steps to welcome intermarried couples outside the framework of a marriage ceremony, celebrating newlyweds before or after the wedding. And last year, the movement’s synagogues voted to allow non-Jews as members.

Also last year, the movement’s leading rabbis doubled down on the ban on officiating intermarriages in an open letter. The letter also called for embracing couples that already were intermarried.

The movement also convened a commission to study the intermarriage ban and the movement’s position that Judaism is determined by matrilineal descent, or through a Jewish mother.

“We affirm the traditional practice of reserving rabbinic officiation to two Jews,” the 2017 letter reads, adding that the movement’s leaders “are equally adamant that our clergy and communities go out of their way to create multiple opportunities for deep and caring relationships between the couple and the rabbi, the couple and the community, all in the context of welcome and love that extends well before the moment of the wedding and well beyond it too.”

That position has been both welcomed and disparaged: Supporters say it retains the movement’s welcoming stance within the framework of Jewish law and tradition, while critics say couples are unlikely to feel welcome if they have to go outside the movement to marry.

In January, the Rabbinical Assembly’s Executive Committee released a statement reaffirming both the ban on officiating intermarriages and the policy of determining Judaism by matrilineal descent. But it referred the question of attending intermarriages to the law committee, which issued its ruling last week. The ruling also calls for reaching out to intermarried couples.

“This standard continues to affirm our belief that the narratives, symbols, and rituals of the Jewish wedding ceremony we represent are intended for Jewish couples who can authentically accept them as religiously meaningful,” last week’s ruling states. “This important standard, however, does not preclude our welcoming and reaching out to intermarried couples and families, as we believe it is also important to create positive rabbinic relationships with both the Jewish and non-Jewish member of such a couple.”

Since 2000, more than 70 percent of non-Orthodox Jews have married non-Jewish partners, according to the Pew Research Center’s 2013 study of American Jewry. The Reform movement allows intermarriage and the Orthodox prohibit it.

Banned from marrying interfaith couples, Conservative rabbis are finding other ways to celebrate them

Conservative Judaism’s leadership turns over. Will intermarriage policy be next?