As pickles conquer the mainstream, are they still a Jewish food? 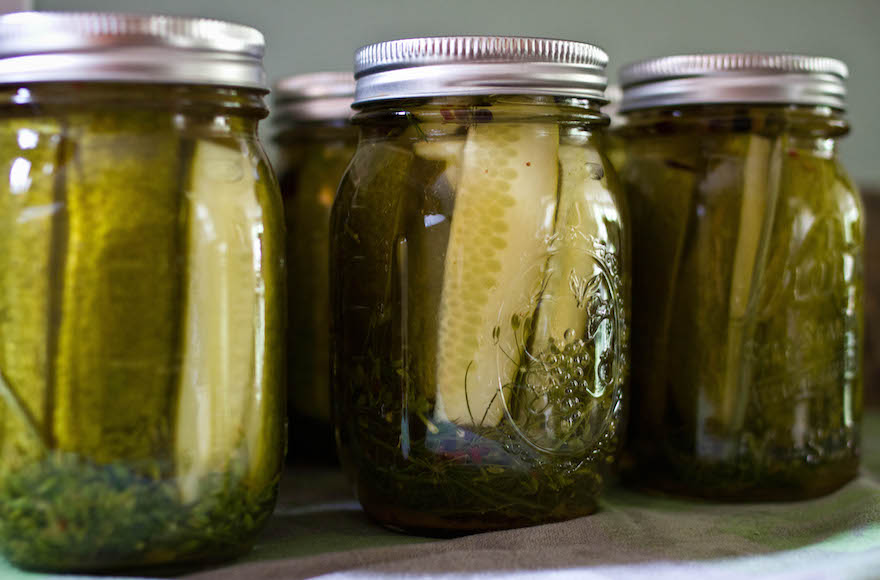 PHILADELPHIA (JTA) — When many folks of a certain age and demographic think of pickles, their thoughts likely drift back to memories of the pickle bar at their favorite deli, or of talkative vendors on New York City’s Lower East Side.

That’s largely thanks to the Jewish immigrants living in New York at the end of the 19th century, who made the dill pickle we know and love today — with plenty of garlic, dill and salt brine — so popular.

But today, pickles and pickle flavors can be found in places they didn’t used to be — from beer to ice cream to chic restaurant delicacies. The popular lifestyle and culture site Refinery29 recently described the current age as “peak pickle” and dubbed pickles “2018’s hottest food trend.” The research firm Technavio sees the global pickle market reaching $12.74 billion in 2020, with more than half of that in the United States. We now have National Pickle Day (Nov. 14) and International Pickle Week (after Memorial Day).

The frenzy has even reached Hollywood: Seth Rogen is reportedly set to star in a movie about a pickle factory worker named Herschel Greenbaum, who falls into a vat of pickles in 1918 and re-emerges intact 100 years later.

One could say on the whole that pickles are having a moment in America.

As picklemania continues to grow, Jews may be asking: Do pickles still have a Jewish identity? Did they ever? Are they solely seen as an American food these days, if anything? 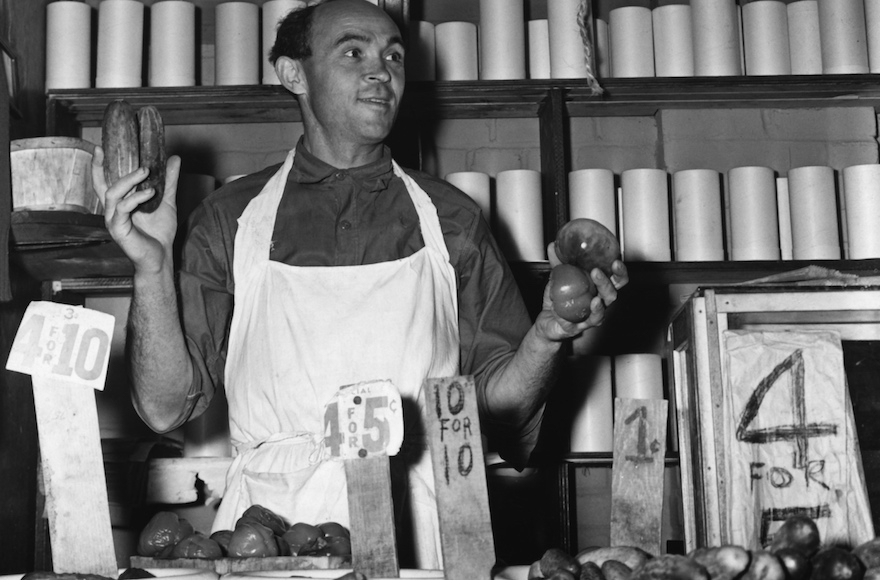 Pickles have been associated with old-time New York City, and its Lower East Side neighborhood, which once teemed with Jewish immigrant vendors. (Buyenlarge/Getty Images)

The pickle craze was encapsulated recently at the latest urban pickle festival: the first Pickledelphia, which was held last week at the Schmidt Commons in this city’s trendy Northern Liberties neighborhood. The crowd of more than 1,500 enjoyed wares from some two dozen vendors.

They could sample the traditional pickled cucumbers, but much more, including everything from “drinkable pickle brine” to pickle-flavored beer and liquor. There were accents on traditional Philadelphia foods, such as a pretzel wrapped around a pickle from Philly Pretzel Factory, and pickle-flavored chips from Herr’s. There was live music and a caricaturist who drew people in pickle form. Of course, there was a pickle-eating contest.

Many on hand wore green, even though the Super Bowl champion Eagles weren’t playing that Sunday, and others sported shirts emblazoned with Pickle Rick, a character from the cult animated series “Rick and Morty.” (When I reached out to the organizers for press credentials, the email back came from Pickle Rick.)

If anything, the event was too successful, which led to some social media grumbling about long lines, overcrowding and how some vendors ran out of pickles.

Pickledelphia was the brainchild of Michael Wink, a partner in Digital Force Agency, an events and digital marketing agency in Philadelphia that had  staged the Philadelphia Beard Festival. Philly has recently hosted festival-type events based around other foods, such as burgers, cheesesteaks and pizza. So naturally it was time for pickles to have their turn.

“Everybody loves pickles,” Wink said at the event. “My sisters, cousins — everyone goes nuts over pickles. I’d say on Thanksgiving, you could have the best spread out there, and my sisters and cousins were still raiding the fridge for the pickles. So I know there was a love of pickles there, and I started seeing things.”

While there was nothing outwardly Jewish about the festival, the connection between Jews and pickles goes back almost to the beginning. Cucumbers are mentioned in the Torah: Numbers 11:5 says “We remember the fish which we used to eat free in Egypt, the cucumbers and the melons and the leeks and the onions and the garlic.” And later, in the book of Isaiah: “The daughter of Zion is left like a shelter in a vineyard, Like a watchman’s hut in a cucumber field, like a besieged city.” Jews from communities of old in Eastern Europe and Iran enjoyed pickled vegetables as staples, and some even believed the food could cure disease.

According to the YIVO Encyclopedia of Jews in Eastern Europe, Jews in Yiddish-speaking lands specialized in the cultivation of cucumbers, and would pickle them over the harsh winters and serve them starting just before Passover.

“Lactofermentation in salt pickling enhances the nutritional value of vegetables by preserving vitamin C, among other benefits,” YIVO explains, “which was important during long winters without fresh green vegetables.”

But experts say that while pickles have always been important to Jews, no one has never quite had a monopoly on them. 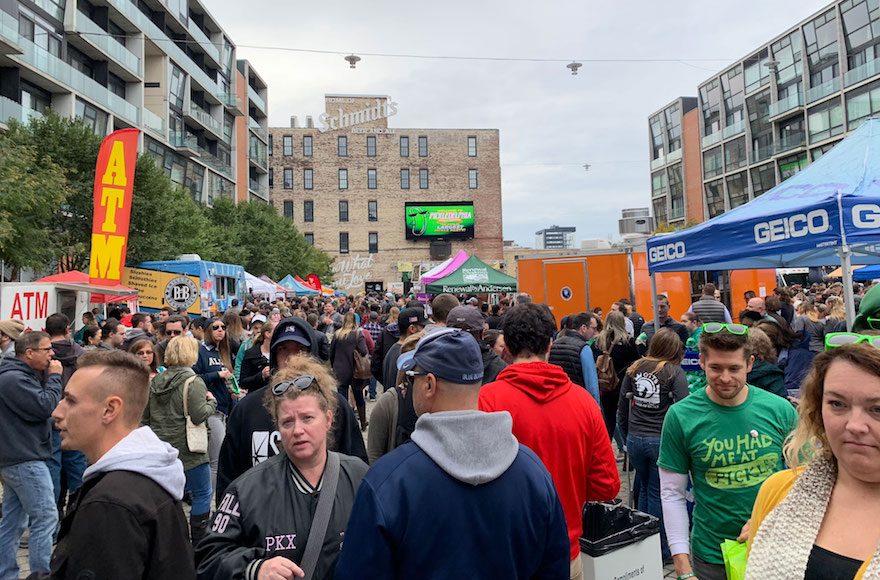 “You ask a big question, but I’m curious first as to whether pickles are ‘Jewish’ to begin with,” said Roger Horowitz, a food historian and author of the book “Kosher USA: How Coke Became Kosher and Other Tales of Modern Food.” “They are just cucumbers preserved in a brine solution, a method with wide historical roots and practiced by many cultures.”

There were some kosher pickle companies at Pickledelphia, including the Teaneck, New Jersey-based Pickle Licious, and the Philadelphia company Zayda’s. The co-founder of the latter, Steven Slutsky, is a local character who performs comedy in Philadelphia as The Pickle Man. (He is known for traveling around town on a rickshaw-style tricycle with a toilet for a seat.)

But the event had more of a multicultural flavor, and Wink noted that at least three vendors fused American pickles with Asian cuisine. One of them, a Chinatown-based Japanese restaurant called Hi-Kori, offered different flavors of fried pickles at one of the highest-trafficked booths. (Pickled vegetables aren’t exactly foreign to all Asian cultures — Korean cuisine often includes other pickled items on the menu beyond kimchi, for instance.)

“Pickles are very much a part of Jewish deli culture,” said Rabbi Lance Sussman, who is both senior rabbi at Reform Congregation Keneseth Israel outside Philadelphia and a scholar of American Jewish history. “The cucumber was probably originally from India, but there is a tradition of a pickled dish (turnip?) in the Talmud. Jewish delis continue to serve free pickles with meals and sometimes have pickle bars, too. [But] of course, pickles are not unique to the Jewish community.”

Ironically, Pickledelphia was originally scheduled for the afternoon of Sept. 9, which was the eve of Rosh Hashanah. However, rain intervened and pushed the date back to October.

“We started putting it out and we got a lot of backlash,” Wink said. “They’re like, ‘You’re doing this on the Jewish holiday!’ We know the Jewish people love pickles.

He added: “The rain kind of came through, and we joke around — God likes pickles, we’ll be all right.”