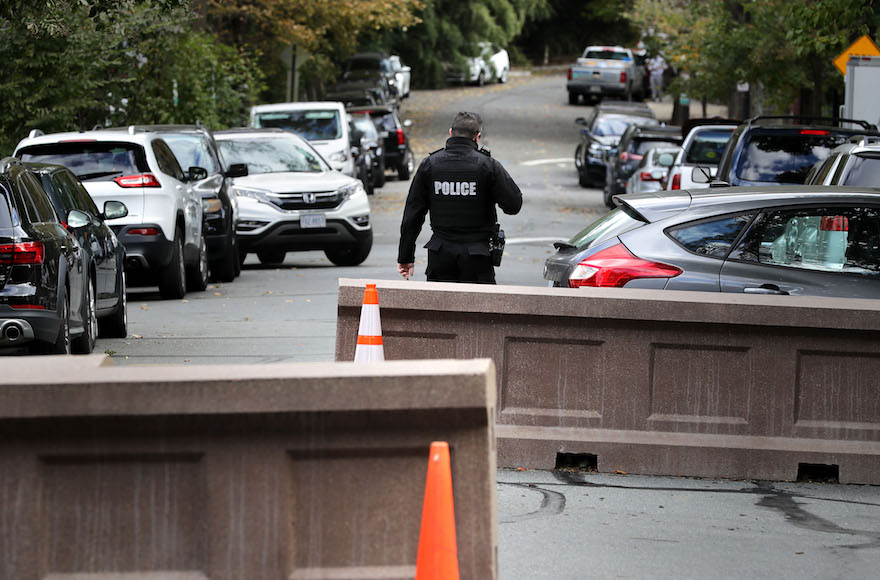 Secret Service officers stand guard at the end of the block where former President Barack Obama and his family live in Washington, D.C., and where an explosive device was sent Oct. 24, 2018. Similar ones were also sent to former Secretary of State Hillary Clinton and her husband former President Bill Clinton, and CNN's offices in New York. (Chip Somodevilla/Getty Images)
Advertisement

(JTA) — Police in Sunrise, Florida, said they are investigating a suspicious package at the local offices of U.S. Rep. Debbie Wasserman Schultz, D-Fla.

The package arrived on the same morning that homemade bombs were intercepted before they could reach the homes of former President Barack Obama and 2016 Democratic presidential nominee Hillary Clinton.

Wasserman Schultz’s office building was evacuated and the bomb squad and firefighters reportedly were on the scene.

A homemade bomb was sent as well to the Time Warner Center in New York City, which is home to a CNN bureau, two days after an explosive device was found at the suburban New York home of the Jewish billionaire and liberal donor George Soros. CNN reported that the package sent to Soros also had Wasserman Schultz’s address as a return address. Wasserman Schultz is Jewish. CNN said she is not a suspect, but is believed to be set up.

“There is a strong suspicion” that the two packages intended for Obama and Clinton are connected to the package sent to Soros, an unnamed law enforcement source told CNN. Soros and Clinton live about 10 miles from each other. Obama lives in Washington, D.C.

The packages for Obama and Clinton were intercepted by the Secret Service, according to reports.

On Wednesday afternoon, the building that houses The Jewish Agency offices in New York City were evacuated, The Jerusalem Post reported. New York Gov. Andrew Cuomo has offices in the same Manhattan building.

CNN said the package sent to the CNN bureau was addressed to former CIA Director John Brennan, who is a contributor to MSNBC and appears on other cable news channels. CNN, citing a New York Police Department source, said it contained a device constructed of pipe and wires and was being treated as a real explosive. The NYPD later said that the package also contained white powder, and that the device “appeared to be live.”

The Time Warner Center, which is located in the heart of Manhattan, was evacuated, forcing CNN staffers to leave the newsroom during a live broadcast. CNN anchors conducted interviews on the street in front of the meeting using cellphones.

The building’s evacuation included offices for WarnerMedia and other Turner-owned properties, as well as a shopping mall and a Whole Foods grocery store located in the basement level.

CNN withdrew a report that said an explosive device was addressed to the White House and intercepted at an off-site facility.

“We condemn the attempted violent attacks recently made against President Obama, President Clinton, Secretary Clinton, and other public figures,” White House press secretary Sarah Sanders said in a statement. “These terrorizing acts are despicable, and anyone responsible will be held accountable to the fullest extent of the law. The United States Secret Service and other law enforcement agencies are investigating and will take all appropriate actions to protect anyone threatened by these cowards.”

On Monday afternoon, a package containing a bomb was opened by an employee at Soros’ home in Katonah,  in northern Westchester County. The employee took the device to a wooded area near the home and then called police. Soros was not at the home when the bomb was discovered; it was detonated in the wooded area. Soros is a frequent target of the far-right for his support of liberal and pro-democracy causes. The case was turned over to the FBI.

Ivanka Trump, a White House adviser and the daughter of President Donald Trump, issued a statement condemning the bombs, which she also tweeted.

I strongly condemn the attempted acts of violence against President Obama, the Clinton family, @CNN & others. There is no excuse—America is better than this.

Gratitude to the @SecretService and law enforcement for all they do to keep this nation safe.

In an op-ed in The New York Times, Soros’ son Alexander laid blame on President Trump for the atmosphere that led to the bomb being placed at his father’s house.

Alexander Soros, the deputy chairman of his father’s philanthropy, the Open Society Foundations. said his father had faced “plenty of attacks along the way, many dripping with the poison of anti-Semitism.” But such attacks moved from the extremist fringes closer to the mainstream during Trump’s 2016 presidential campaign.

“White supremacists and anti-Semites like David Duke endorsed his campaign,” wrote Soros. “Mr. Trump’s final TV ad famously featured my father; Janet Yellen, chairwoman of the Federal Reserve; and Lloyd Blankfein, chairman of Goldman Sachs — all of them Jewish — amid dog-whistle language about ‘special interests’ and ‘global special interests.’ A genie was let out of the bottle, which may take generations to put back in, and it wasn’t confined to the United States.”