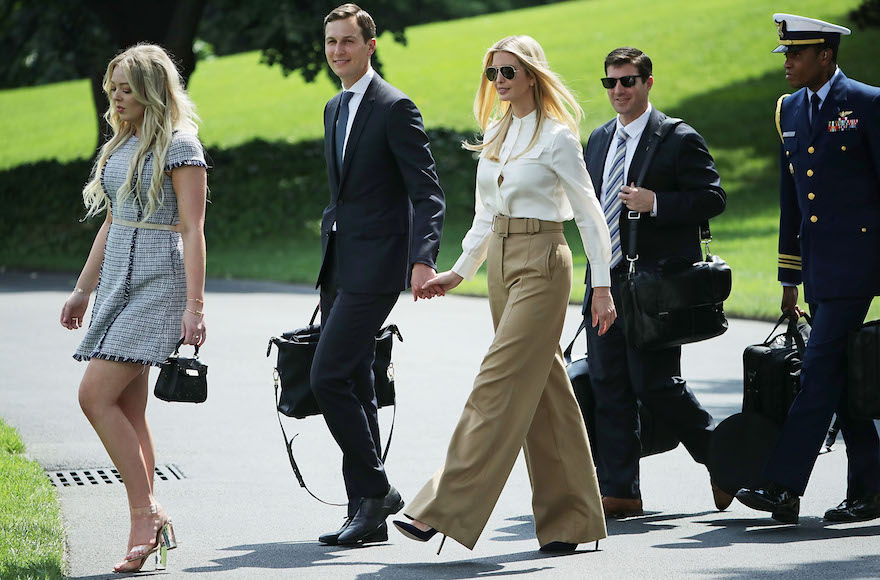 (JTA) — Ivanka Trump and Jared Kushner will accompany President Donald Trump and his wife, Melania, in visiting Pittsburgh on Tuesday in the wake of the synagogue shooting that killed 11 worshippers.

The addition of the president’s Jewish daughter and son-in-law to the entourage was reported Tuesday morning.

They will be joined as well by White House adviser and Mideast peace negotiator Jason Greenblatt. Avi Berkowitz, assistant to the president, already is on the ground in Pittsburgh.

White House spokeswoman Sara Huckabee Sanders said Monday in announcing the president’s visit that the Trumps will “express the support of the American people and grieve with the Pittsburgh community.”

“The president cherishes the American-Jewish community for everything it stands for and contributes to our country,” she said. “He adores Jewish Americans as part of his own family. The president is the grandfather of several Jewish children. His daughter is a Jewish American and his son-in-law is a descendant of Holocaust survivors.”

In an interview Monday night with Fox News’ Laura Ingraham, Trump echoed that “I’m just going to pay my respects. I’m also going to the hospital to see the officers and some of the people that were so badly hurt. And I really look forward to going. I would have done it even sooner but I didn’t want to disrupt even more than they have disruption.”

Peduto reportedly had encouraged Trump to delay his trip by several days, which the president was unwilling to do due to scheduled rallies for Republican candidates in the run-up to the midterm elections.

Trump may get a mixed reception from the Jewish community in Pittsburgh.

Rabbi Jeffrey Myers, rabbi of the Tree of Life Congregation, told CNN on Monday that Trump is “always welcome.”

In contrast, the 11 members of the Pittsburgh chapter of Bend the Arc, a Jewish liberal social justice group, wrote in an open letter to Trump that he was not welcome in Pittsburgh.

“For the past three years your words and your policies have emboldened a growing white nationalist movement,” the letter said. “You yourself called the murderer evil, but yesterday’s violence is the direct culmination of your influence.”

More than 68,000 people had signed the letter, posted on the Bend the Arc website, as of Tuesday morning.

The visit comes on the same day as the first victims’ funerals.

Services for brothers Cecil and David Rosenthal are scheduled to begin at 10 a.m. The funeral for Dr. Jerry Rabinowitz is set for 11 a.m.