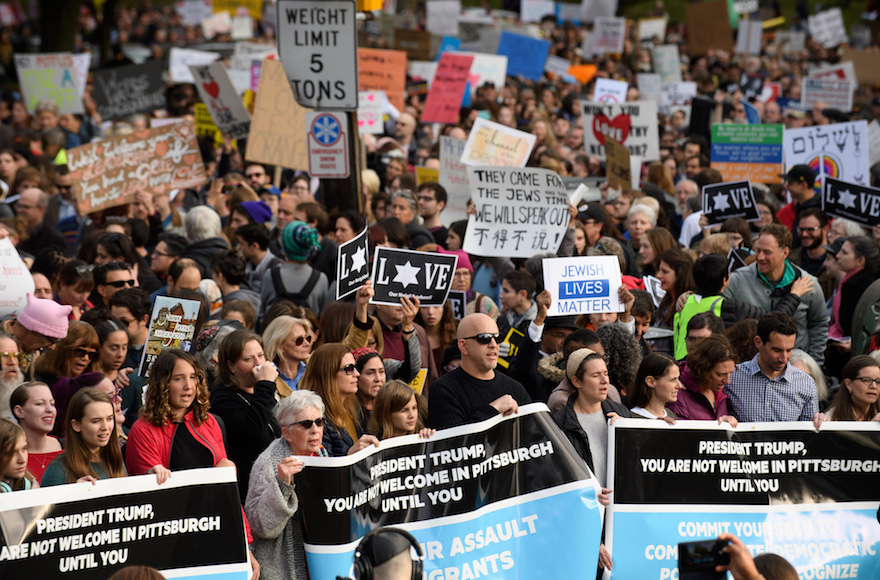 An estimated 4,000 people protested Donald Trump as he visited the Squirrel Hill neighborhood of Pittsburgh, near site of the Tree of Life mass shooting, Oct. 30, 2018. (Jeff Swensen/Getty Images)
Advertisement

PITTSBURGH (JTA) — Thousands of protesters turned their backs on President Donald Trump on Tuesday as his motorcade approached the synagogue where a gunman killed 11 worshippers.

At the Tree of Life Congregation, Trump and his entourage met with its rabbi, Jeffrey Myers, and placed stones on an outdoor memorial for the 11 victims. Inside, they lit candles for the dead.

The president was accompanied by his wife, Melania, along with his Jewish daughter, Ivanka, and her husband, Jared Kushner, as well as the Treasury secretary, Steve Mnuchin, who is Jewish. Also present was Israeli Ambassador Ron Dermer.

Trump also visited the hospital where the wounded were treated and met with injured first responders and with medical staff.

As Trump’s car neared the synagogue, where the assailant in Saturday’s attack shouted his determination to kill all Jews, the protesters chanted “Safety! Solidarity!” A number of liberal Jews are among those who have blamed Trump’s incendiary rhetoric, especially aimed at immigrants, for spurring the violence.

The suspected killer, while reviling Trump for being close to Jews, echoed the president’s fear that a convoy of migrants heading through Mexico amounted to an “invasion” of the U.S. border.

The first three funerals for the victims were held Tuesday.