Is this the last stand for Amsterdam’s Jewish market? AMSTERDAM (JTA) — Growing up, Jaap Soesan would count the days until his parents would take him to Waterloo Square, a central area that many people here call the Jewish market.

“It was a treat to go there,” recalled Soesan, a 95-year-old Holocaust survivor from the Amsterdam suburb of Amstelveen. “It was cozy. It was unique. It was varied, so much different produce. It was the heart of the Jewish neighborhood,” he told the VPRO broadcaster during a 2016 interview about his childhood in the 1930s.

The Nazi occupation forces murdered most of the market’s Jewish vendors and customers. Today, only a handful Jews, nearly all of them Israelis, work there.

Remarkably, though, the Waterloo Square bazaar, which was set up in 1893 for Jews, got a new lease on life even after its closure by the Nazis.

In the 1970s it became a mecca for fashionistas, who were part of its unlikely human tapestry comprising handymen in search of secondhand tools, book collectors, audiophiles and poets.

The advent of resale sites like eBay has since hurt sales. But the same mix is still there.

At the Waterloo Square today, a bicycle repairman from Nigeria plies his trade next to a Jordanian’s falafel stand, an Amsterdam-born bookseller and an army surplus vendor as tourists from around the world try their hand at bargaining.

But a new municipal plan aims to reduce drastically the number of vendors at the market and take advantage of the valuable real estate land taken up by their ramshackle stalls. It’s threatening to deal a death blow to one of this city’s most loved and historically Jewish institutions, activists fighting the plan say.

The plan, which the City Council passed this year, does away with a third of the market’s 300 stalls and half of its characteristic storage boxes – metal constructions favored by graffiti artists (and pub crawlers in search of a place to urinate). The new space will feature a mini-mall.

“Waterloo Square isn’t doing well,” the city wrote in its plan, which noted how the market’s layout prohibits efficient circulation of shoppers, among other purported problems. “The condition of maintenance and the use of the land is also far below standard,” the report said.

But by reducing the space and forcing modern standards on the traditionally chaotic market, “the city is killing its soul,” said Nissim Kol, an Israel-born vendor who has been working at the market since 1992 and sells products from India.

Kol, 60, and other critics of the city’s plan concede that the Waterloo Square market is in need of some change. Sales have decreased gradually to the point that “it’s no longer profitable to open up shop,” Kol said. A decade ago he would often earn hundreds of dollars a day. Today he often is left with no more than $12 to show for a day’s work at the market. 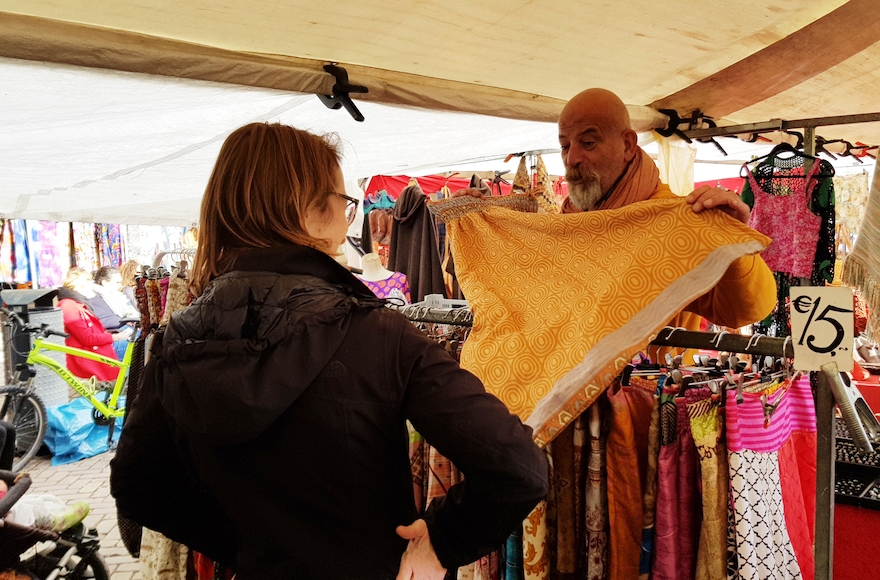 The plan to tidy up Waterloo Square is part of a larger drive that began 15 years ago to gentrify a city known internationally for its sex trade, cannabis-dispensing “coffee shops” and atmosphere of freedom.

Once the realm of low-income couples, Amsterdam’s famous houseboats are now Airbnb favorites.

Vondel Park, where hippies would pitch tents in the 1970s, is now at the heart of an upscale neighborhood where rents match those of Paris and London.

The municipality, which has had success in highlighting its museums, tulips and canals over carnal pleasures, has been cracking down for years on its red light  districts, including plans to drastically reduce the number of sex workers. And a similar policy on coffee shops has seen their number plummet by 37 percent since 2007, to 166 today.

That the Jewish market should now suffer because of gentrification is “ironic,” according to Bart Wallet, a University of Amsterdam historian and author of the book “History of Jews in the Netherlands,” which was published in Dutch last year. After all, he said, the same market “was born as a result of gentrification.”

Wallet was referring to a municipal crackdown on the unofficial Jewish market that had existed in the 19th century along Jodenbreestraat, literally “Jewish Broad Street.” Located outside the center and near the Portuguese Synagogue, the street and its alleys became a crowded bazaar. A rare photograph of the bustling Jodenbreestraat market now hangs at the entrance to Rosh Pinah, the city’s Jewish elementary school.

“It was a crowded area full of merchants of all kinds, hauling bags and crates full of every produce available and then selling it on street corners,” Wallet said. “It was a mess.”

The proximity of the Moses and Aaron Church to that hub of commerce didn’t help its popularity with churchgoers who needed to pass there on Sundays, he said. 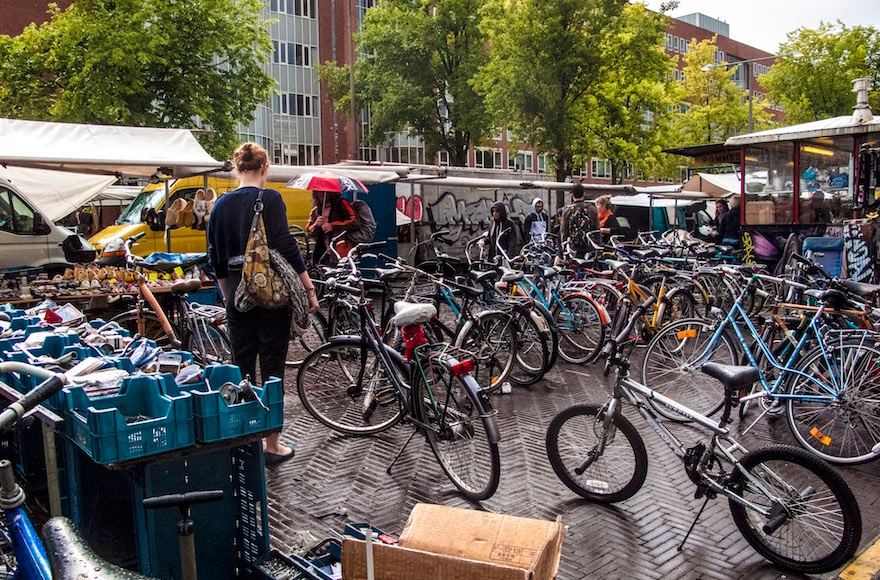 So the city banned commerce on Jodenbreestraat and instead offered the Waterloo Square in a move that aroused protests no meeker than the ones on display today around the same market.

“The chief rabbi of Amsterdam had to talk to the merchants to convince them to move, which they did quite reluctantly,” Wallet said.

During its opening in 1893, the Waterloo Square Market was “a completely Jewish institution,” Wallet said. It was deserted by sundown on Fridays and closed on Saturdays for Shabbat, as well as on all Jewish holidays. A significant number of the stalls offered scripture and Judaica items.

Even the market’s name, which today shares its spelling with the Belgian town where Napoleon’s army was defeated, may be rooted in Yiddish. The market stands on land that was claimed from water after the arrival of the Portuguese Jews in the 16th century, Wallet said.

“It may have come from a mashup of the Dutch word ‘water’ and the Hebrew word for no, ‘loh.’ Water-Loh,” he said.

The Dutch-language greeting “mazzeltof” may be another inheritance from the Jewish market. Meaning “good luck” in Yiddish and exchanged frequently between vendor and customer in the market after a transaction, it was borrowed by non-Jews to mean simply “goodbye.”

Mazzeltof is used to this day in the Amsterdam dialect, along with dozens of other Yiddish words such as “jatten” — meaning to steal and referring to a person’s hand, or “yad” in Hebrew – and even the very name of Amsterdam. Locals call it “Mokum,” from the Yiddish word for place, “makom.”

By the 19th century, Jewish and non-Jewish intellectuals could be found in the cafes that sprang up around the market, Wallet said.

When the Germans invaded in 1940, Waterloo Square at first was allowed to operate, but only Jews were allowed to enter.

In 1941, Nazi sympathizers who stormed the market, smashing stalls, were confronted by communists, including Jews. The result was a street brawl that ended with the death of a Nazi collaborator. That triggered Nazi retaliations, including the murder of more than 400 Jews rounded up in the ghetto.

These events led to the February Strike – perhaps the largest-scale act of resistance anywhere in Western Europe to the Nazis, specifically over their persecution of Jews.

“This market, it had a key role in some formative events not only in Dutch Jewish history, but in the history of the nation,” Wallet said.

Some 75 percent of Holland’s 140,000 Jews, most of whom had lived in Amsterdam, died in the Holocaust.

After the war, Waterloo Square was reopened, but with few Jews.

In the 1970s, many Israeli vendors discovered it, reintroducing a Jewish element to the place. However, in 1977 they had to move out along with everyone else at the market. It was reduced dramatically in size by the municipality, which built offices despite vociferous protests.

Waterloo Square returned a few years after construction was completed, experiencing a boom that lasted until the financial crisis of 2008. It has not recovered from that crisis, giving rise to fears that its nine lives are up.

Then again, over the past 135 years “this market has pulled itself from the edge of collapse several times, be it after a world war or a city plan,” historian Hans Goedkoop said in a 2016 documentary about the market on the VPRO broadcaster’s “Andere Tijden” television show.