What is Gab and where else are anti-Semites gathering on the internet? 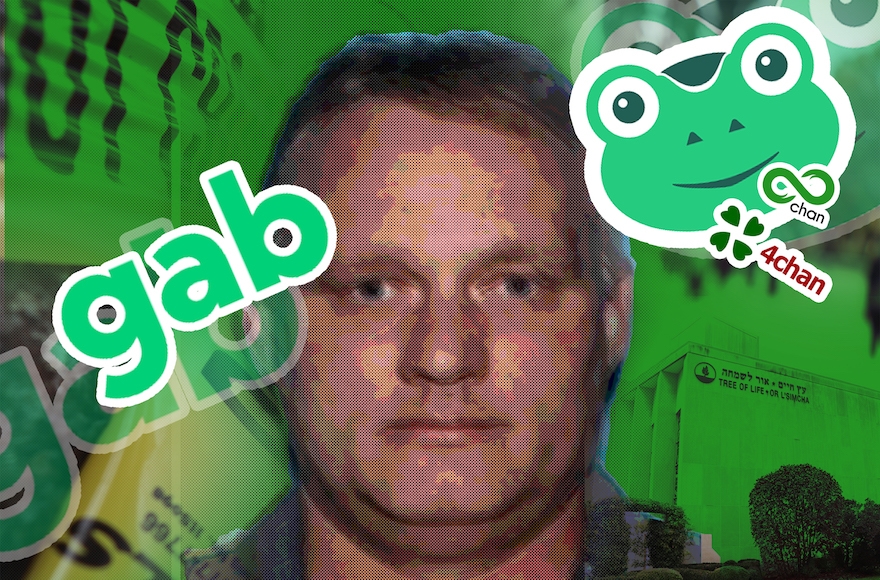 (JTA) — Robert Bowers, the man held in the shooting deaths of 11 people at a synagogue in Pittsburgh on Saturday, belonged to an online community where he frequently railed against Jews and immigrants. That social media site, Gab, has come under closer scrutiny this week.

Created two years ago as a haven for far-rightists who felt they were being targeted on mainstream platforms, Gab quickly rose in popularity. But the site wasn’t just home to ideological discussions. Critics say threats of violence and virulent hatred are a common theme of those posting to it.

JTA spoke to two experts on extremism to learn more about Gab and other sites like it. Michael Edison Hayden is an open source intelligence analyst at Storyful, a company that analyzes conversations on social media. Oren Segal is the director of the Anti-Defamation League’s Center on Extremism.

Gab was founded by Andrew Torba in August 2016 as a response against what he saw as censorship of right-wing users by some social media platforms. Often these users were kicked off platforms for using racist or anti-Semitic language or harassing individuals. Among those who found a home on Gab was Milo Yiannopoulos, the former Breitbart News provocateur who was booted from Twitter after urging his followers to harass the African-American comedian Leslie Jones, and Andrew Anglin, the founder of the neo-Nazi site The Daily Stormer.

“What makes the entirely left-leaning Big Social monopoly qualified to tell us what is ‘news’ and what is ‘trending’ and to define what ‘harassment’ means?” Torba told Buzzfeed in 2016. “It didn’t feel right to me, and I wanted to change it, and give people something that would be fair and just.”

Straight away, Hayden said, Gab became a popular platform for white nationalists as “a place where they felt they could give voice to their anti-Semitic, racist, bigoted, misogynistic views out in the open.” He has spent over a year studying the site.

Segal called the site “the primary destination for a lot of white supremacists and anti-Semites.”

Apple and Google have refused to offer Gab in their app stores due to concerns about hate speech.

Gab has claimed to have some 800,000 users, but Hayden estimates the actual count is far less.

A Jewish emergency crew and police officers at the site of the mass shooting at the Tree Of Life synagogue in Pittsburgh, Oct. 28, 2018. (Jeff Swensen/Getty Images)

What is unique about Gab?

Gab merges features of different sites, offering the chronological timeline of posts from Twitter but the ability for users to “upvote” or “downvote” posts they like or dislike a la Reddit. Though threats of terrorism and violence are supposed to be banned, the policy is not always enforced.

“On numerous occasions, posts that threatened violence to specific people were ignored, even after being reported,” Hayden said.

As a social media site, Gab is considered an appealing alternative to other sites frequented by white nationalists, including Stormfront, 4chan and 8chan, that are forums but do not as easily facilitate connections among users.

Hayden said that “in the way that you can organize a party on Facebook or discuss the news with your friends in a group DM on Twitter, a racist could organize harassment campaigns and other unpleasant things at Gab very easily.”

How did Bowers use the site?

The vast majority of messages posted by Bowers were anti-Semitic in nature, according to the Anti-Defamation League. Among other things, he wrote that “Jews are the children of satan,” and referred to “kike infestation” and “filthy EVIL jews.” His photo shows the number 1488, a neo-Nazi hate symbol that references a white supremacist slogan called “14 words” and 88, which is code for “Heil Hitler.”

Those type of messages are not unusual on Gab, according to Hayden.

“It was common for Gab posters to treat Jews as if they were inhuman and blame them for all kinds of problems,” he said.

How is Gab responding?

On Monday, Gab said on Twitter that the site was taken down but was looking to return with a new host.

Visitors to the site see a message from Torba in which he says that he has been providing information to the Justice Department and FBI about “an alleged terrorist.”

“In the midst of this Gab has been no-platformed by essential internet infrastructure providers at every level,” the message reads. “We are the most censored, smeared, and no-platformed startup in history, which means we are a threat to the media and to the Silicon Valley Oligarchy.”

What are other similar sites?

Segal said that he had seen discussions on Gab before it was taken down of other possible venues for users. Those cited include the emerging social media platforms Wrongthink, Minds and Mewe.

Wrongthink, whose site yielded an error message as of Thursday afternoon, is “already somewhat popular with right-wing posters because it promotes itself as an alternative network by people who ‘actually respect your freedom of speech,’” Segal said. The other sites don’t necessarily have an extremist or right-wing bent.

Voat, a news aggregator and social networking site, and the forums 4chan and 8chan are also popular among those on the far-right, Hayden said.

And while Twitter and Facebook continue to crack down on hateful accounts, users there continue to target others with anti-Semitic, racist and homophobic messages daily.

“The number of forums or platforms are really endless,” Segal said, “and none of them are completely absent of extremism and hateful speech.”