Canada formally apologizes for turning away 907 Jewish refugees on the St. Louis in 1939 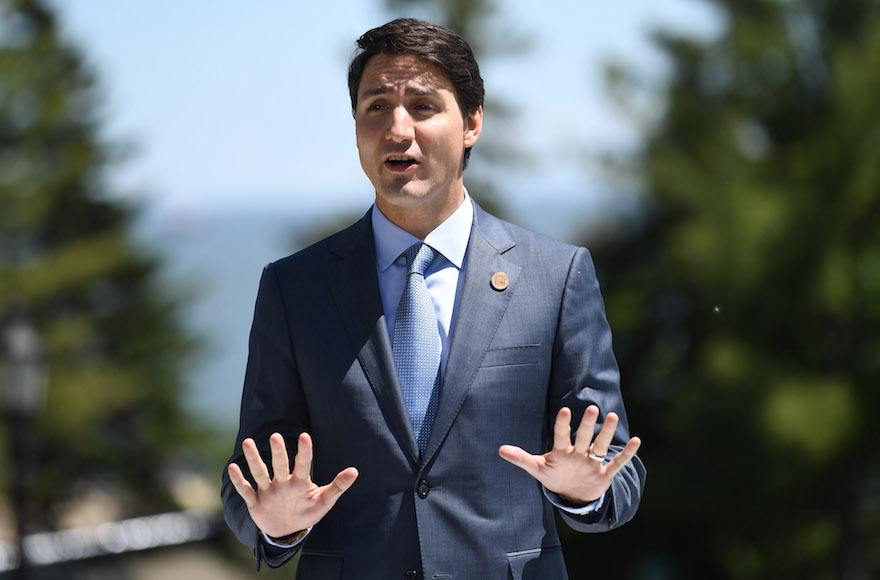 (JTA) — Canadian Prime Minister Justin Trudeau formally apologized for the government’s decision in 1939 to turn away a ship full of Jewish refugees who had escaped Nazi Germany.

“Today I rise to issue a long-overdue apology to the Jewish refugees Canada turned away,” Trudeau said Wednesday in a speech to Parliament

Canada denied asylum to the 907 German Jews on board the MS St. Louis when it arrived on its shores. Cuba and the United States also denied entry to the refugees and, after they returned to Europe, about one-quarter of those on board died in the Holocaust.

“In 1939, Canada turned its back on 907 Jewish refugees, deeming them unworthy of a home, and undeserving of our help. Today, I issue an official apology on behalf of the Government of Canada to the passengers of the MS St. Louis and their families for this injustice,” he said in both English and French.

“While decades have passed since we turned our backs on Jewish refugees, time has by no means absolved Canada of its guilt or lessened the weight of our shame,” he said.

During his speech, Trudeau invoked the shooting attack on a Pittsburgh synagogue, calling it a “tragic reminder” that anti-Semitism still exists in Canada and elsewhere in the world. He called on Canadians to stand up against those “xenophobic and anti-Semitic attitudes.”

Prior to the apology, Trudeau met with Ana Maria Gordon, who was a passenger on the St. Louis and who now lives in Canada.

Trudeau announced in May that he would make the apology, saying: “An apology in the House of Commons will not rewrite this shameful chapter of our history. It will not bring back those who perished or repair the lives shattered by tragedy. But it is our collective responsibility to acknowledge this difficult truth, learn from this story, and continue to fight against antisemitism every day, as we give meaning to the solemn vow: ‘Never again.’”

The US State Department apologized for the incident in 2012

B’nai Brith Canada in a statement welcomed the apology and called on the government to adopt a concrete, national action plan to fight antisemitism.

“It was very important that the government made this statement and fulsome apology for the past,” said Michael Mostyn, Chief Executive Officer of B’nai Brith Canada. “It was crucial that every political party joined in, acknowledging this unspeakable failure in Canada’s history.”