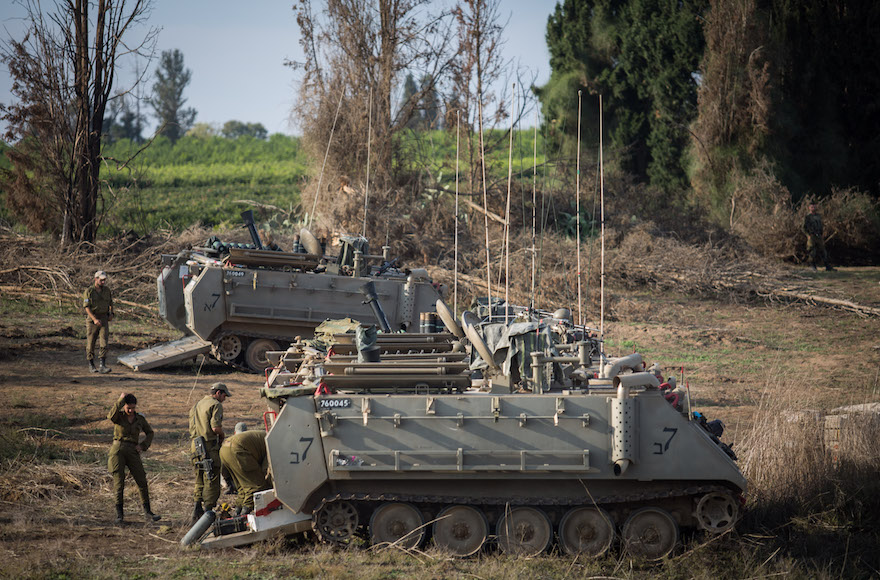 JERUSALEM (JTA) — Palestinian terror groups in Gaza reportedly have agreed to commit to a cease-fire of hostilities that have seen more than 400 rockets bombard southern Israel in a 25-hour period.

Four mediators — Egypt, the United Nations, Norway and Switzerland — helped achieve the cease-fire, according to reports.

Hamas and Palestinian Islamic Jihad said in a joint statement, according to reports, that they are “committed to the cease-fire as long as Israel doesn’t break it and doesn’t attack the Palestinian people.”

The terms were negotiated to go into effect earlier Tuesday afternoon, but rockets continued to be fired from Gaza. Since the announcement by the Gaza groups later on Tuesday, rockets have not been fired.

An unnamed senior Israeli official told the local media that “Israel maintains its right to act.”

“Requests from Hamas for a cease-fire came through four different mediators. Israel responded that the events on the ground will decide” whether there will be a cease-fire, the official said.

The announcement came shortly after Israel’s Security Cabinet emerged from a seven-hour meeting and released a short statement saying that the Israel Defense Forces was instructed to “continue its strikes as needed.” Four government ministers were reported to be opposed to a cease-fire, the Israeli media reported, naming them as Defense Minister Avigdor Liberman, head of the Yisrael Beiteinu party; Justice Minister Ayelet Shaked of the Jewish Home party; Education Minister Naftali Bennett, who heads Jewish Home; and Environmental Protection Minister Zeev Elkin of the Likud party.

Among the some 460 rockets fired by Palestinian factions in Gaza, more than 100 were intercepted by the Iron Dome missile defense system, according to the Israel Defense Forces. In response, the IDF struck 160 targets belonging to Hamas and Palestinian Islamic Jihad terrorist organizations, as well as four government installations used for military purposes. Several of the targets were six- and seven-story buildings, which had “a very significant effect on the other side,” a senior Air Force officer said in an IDF statement.

One person was killed and dozens injured in the rocket attacks from Gaza, more than 100 Israelis were injured and several homes and buildings were hit by the rockets. Seven Palestinians were reported killed in the Israeli attacks on Gaza terror sites.