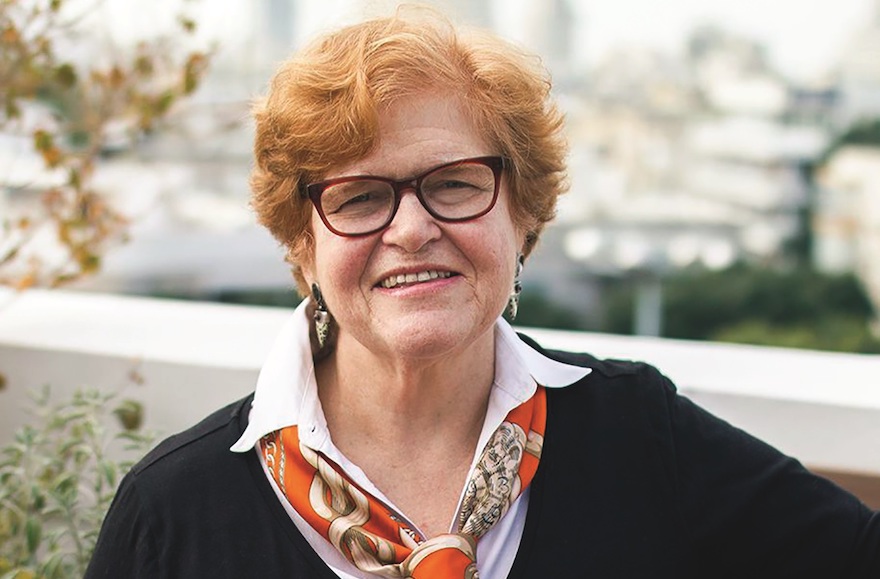 But that iconic image of the August 2017 white power rally in Charlottesville, Virginia, could now be replaced by another one: Police tape cordoning off the Tree of Life Congregation in Pittsburgh. Or perhaps the row of cut-out stars displaying the names of that massacre’s 11 victims.

“Antisemitism,” written earlier this year and due out in February, offers a concise and comprehensive overview of the various forms of Jew-hatred that have reappeared or intensified during the past few years. And before Pittsburgh, there already was plenty to write about: anti-Semitic attacks in Europe; the “alt-right” in the U.S.; the persistence of Holocaust revisionism and denial; whether and when criticism of Israel qualifies as anti-Semitic; and of course Charlottesville.

Then the shooting happened. For Lipstadt, the renowned Holocaust historian and Emory University professor, the tragedy in Pittsburgh was both a surprise and a reaffirmation of her warnings.

Lipstadt, 71, spoke with JTA in New York City on Monday about what the Pittsburgh shooting means for American Jews and how Jews should fight anti-Semitism. The interview has been edited for length and clarity.

JTA: What are your thoughts about the book following Pittsburgh?

It would be easy to say everything changes after Pittsburgh, and I do think everything changed for Jews, for synagogues. Any synagogue board that in the past 10 days hasn’t met to discuss security operations is crazy. That’s the new normal.

We had one incident, a horrible incident — it doesn’t characterize our whole country — but it is disturbing. I tell the story, the one I end the book with, of walking into shul with a little friend who’s now 6 1/2, and her mother said, “Say thank you to the police officer for keeping us safe.”

She’s going to figure it out soon enough. She’ll look across the street at the church dead opposite our shul and there are no police officers there. How do you recognize a shul now if you don’t know exactly what the number is or what the cross street is? Look for the police officers. Kids recognize that.

There will be kids who say what do I want to go to Hillel for? There will be parents who will say, you know what? Why should I take my kid to a place where there’s danger?

In your book, you focus largely on people who enable or minimize anti-Semitism, as opposed to hardcore anti-Semites themselves. Why is that?

It’s “farfaln” [Yiddish, roughly, for “a lost cause”] to try to change those people. I could write about David Duke from here until the cows come. I’m not going to change David Duke’s mind. We all know David Duke is a lowlife of the first order, but it’s the people who might be influenced by David Duke who I want to reach.

Farrakhan, he’s a disgusting excuse for a human being. But it’s the people around him, Linda Sarsour, [Women’s March co-chair] Tamika Mallory, who have the voice of the press, who are listened to. They’re enablers. The enablers are much more dangerous to me than the people we recognize.

On some level, it’s the non-Hitlerian kind of anti-Semite, the one who doesn’t quite present as an anti-Semite, who’s much more dangerous because that’s the person who’s going to have access to the public.

How do you view Linda Sarsour’s activism and fundraising on behalf of Jewish causes, and her collaborations with progressive Jewish groups?

There are lots of people who proclaim they’re against anti-Semitism — “Pittsburgh? Terrible!” Linda Sarsour, you know. At the same time, on the other side of her mouth, she’s talking about don’t humanize Israel and when you wear a Jewish star it makes me feel unsafe. She’s talking out of two sides of her mouth.

I don’t trust people like that. One of the reasons I’m particularly not trusting of someone like that is that there are so many Jews on the left who come so cheap. They wrote me, “Look, Linda Sarsour criticized Pittsburgh, look, she’s helped to rebuild a cemetery,” etc. Give me a break. Anyone who’s not going to criticize what happened in Pittsburgh … someone gets credit? OK, so she’s raising money to help rebuild a cemetery, that’s very nice. But at the same time she’s making awful statements about Jews. Not just about Zionists but about Jews.

[Lipstadt clarified that she was referring to comments Sarsour has made about supporters of Israel, which includes many Jews.]

Farrakhan, he called Jews termites, and Linda Sarsour and Tamika Mallory and leaders of the Women’s March are embracing him and praising him. He called us termites. How much more do you need?

On the right, is a person with 50 Twitter followers who sends a meme something we really need to be concerned about?

It’s a ripple effect. The internet can be a weapon or it can be a great tool for connecting people. Given that we now have the internet, given that these right-wingers have learned how to use it, they have a tool they didn’t have before.

[Lipstadt then refers to anti-Semitic abuse from Trump supporters directed toward reporter Julia Ioffe, who wrote a critical profile of Melania Trump in 2016.]

That would have been the moment for him to look straight into the camera and say, “Listen, this is not how I want to win the presidency. This is not what America is about.” Instead he said “I have no message for them.” [Trump told CNN, “I don’t have a message to the fans.”]

You criticize activists who lead the Boycott, Divestment and Sanctions movement, or BDS, against Israel. But could you explain why you also have harsh words for Israeli Prime Minister Netanyahu, who they oppose?

Bibi has done a number of things. First of all, his welcoming and embrace of [Hungarian prime minister] Viktor Orban, who has been pushing this Soros imagery [billboards criticizing the liberal Jewish philanthropist George Soros] and cracking down on the Jewish community of Budapest in a horrible, horrible way.

No. 2, what happened with the critics of BDS and that policy of keeping them out [of Israel]. Not only is it antithetical to Israel being a democracy, but it steals us of our best argument against BDS. BDS says “shut down the conversation, don’t bring anybody who might disagree with you,” and we say “no, open up the conversation.”

Most of all, the Polish law [criminalizing blaming Poles for collaborating with the Holocaust]. When the Polish law came out, Israel was appalled and was absolutely critical of Poland for this law. But then they announced with great fanfare, with Bibi at the table, we’ve worked things out with Poland, and Poland is changing the law so that it’s not as offensive.

What they had done is essentially changed the punishment from criminal to civil, but at the same time taken away protections for professors and artists.

This bending to Poland on this law was realpolitik. Bibi did it because he wants Orban in Hungary and whoever’s leading the Polish government at the moment, and Austria, to be his friends. Now you can say that’s realpolitik, but don’t do that and then claim Israel is the primary spokesperson and the address for fighting world anti-Semitism when you have coddled an anti-Semite like Orban, when you have made room for a soft-core Holocaust denial law like the Polish law. When you’re talking about anti-Semitism, there’s a red line.

You criticize people on both left and right, anti-Israel activists and the Israeli prime minister. Do you feel like you’re fighting a losing battle trying to carve out space in the middle?

I call it as I see it. If I thought it was a losing battle I probably wouldn’t do it.

I’m not out to win a popularity contest. I hope I’m not a voice crying out into the dark. I didn’t write the book to convince people who already know what they think. If the book makes people a little bit uncomfortable, and makes them reassess where they are and what they’re doing and where they see things, that’s good, too.

So what should we do to fight anti-Semitism?

I compare anti-Semitism to herpes. For most of the time we’ve had herpes, it couldn’t be cured. And if you were suddenly under stress, boom, up would come a herpes infection. Anti-Semitism is like herpes. When a society is under stress, it appears.

I would say the following things: They won’t cure it, but at least it might help alleviate it.

Don’t see anti-Semitism only on the other side of the political transom from which you are located. All these Jews on the left who suddenly, when Trump was running, saw anti-Semitism on the right and began to get all upset about that. And they weren’t wrong. But they had a patch on.

If you’re only seeing it on the opposite side of the transom, you’re instrumentalizing this for political purposes.

I call for civil society. It used to be we could take our lead from government and leadership. We can’t. So it becomes incumbent on civil society to take a role.

A healthy democratic society cannot tolerate anti-Semitism and racism. If that is festering in its midst, it says something is unhealthy about the society. It’s not just Jews for whom this is dangerous. This should terrify you. Because if this is happening to Jews, it may start with the Jews but it doesn’t end with the Jews.