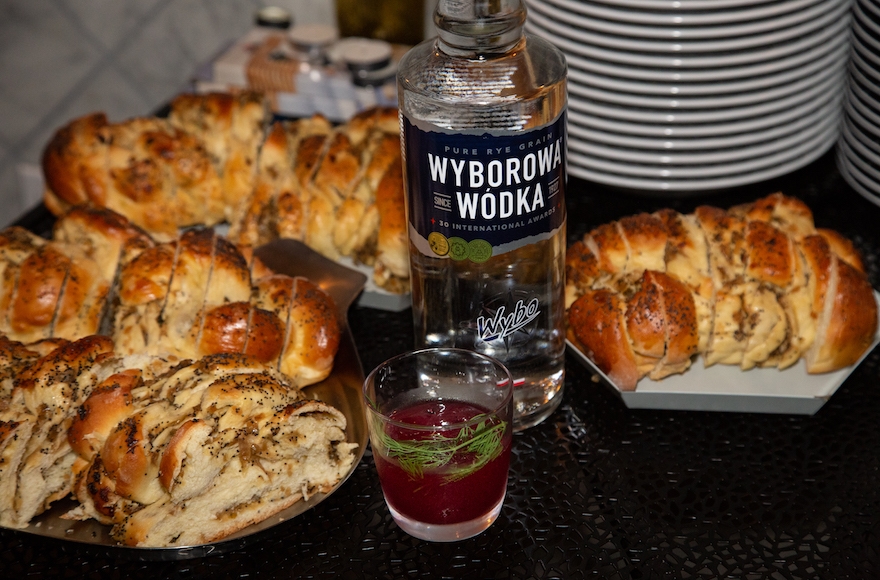 In a charming red-and-white tiled kitchen at the back of a Brooklyn bookstore, some 50 people gathered around a long table to watch a trio of chefs prepare an unusual meal: a unique, pop-up, Polish-themed Shabbat dinner. The starter: a Polish mezze of herring, pickles, radish and dill with the much-anticipated challah.

But first, the Kiddush and Hamotzi blessings — Shabbat traditions made more poignant on this particular Friday night, coming less than a week after the synagogue massacre in Pittsburgh.

The Shabbat event in early November marked the first installment of Roots & Radishes: a Pop-Up Polish Dinner Series, which is co-presented by the Polish Cultural Institute New York in celebration of 100 years of Poland’s regained independence.

The meal was prepared by chefs Liz Alpern and Jeffrey Yoskowitz of New York’s Gefilteria — a Brooklyn-based project aimed at reviving interest in and reclaiming traditional Ashkenazi foods — and Ewa Malika Szyc-Juchnowicz, a well-known Polish chef who runs two restaurants, including a Moroccan one in the Polish city of Gdynia, near Gdansk on the Baltic Sea.

The second meal of the Roots & Radishes series took place the following Sunday: a Polish family dinner that celebrated contemporary Polish cuisine as a melting pot of flavor and culture.

For the Shabbat dinner, in Brooklyn’s Greenpoint neighborhood, the three chefs put together a menu based on research and reimagining classic dishes shared by both Polish and Jewish cultures. The dinner, which combined food and storytelling, drew a mix of academics, foodies, local artists and members of Jewish communities like Lab/Shul and the Workmen’s Circle.

“Think of this as an adventure in the ways in which Jewish and Polish food is similar, different and very contemporary,” Barbara Kirshenblatt-Gimblett, a Jewish studies scholar at New York University and the guest of honor, said as the dinner began.

A year earlier, Alpern and Yoskowitz were in Poland researching the Polish roots of Ashkenazi staples like bagels and bialys when they came upon a bakery in Kraczewice, just outside of Lublin, a former center of Jewish life. There they learned how to make cebularz, a flat, pancake-like bread topped with onions and poppy seeds – clearly in the same family as a bialy.

While the bialy immigrated to New York with the Bialystok Jewish community, cebularz did not. But it has persisted in Poland and today is one of Lublin’s most celebrated foods. The European Union recently designated it as a “heritage food.” 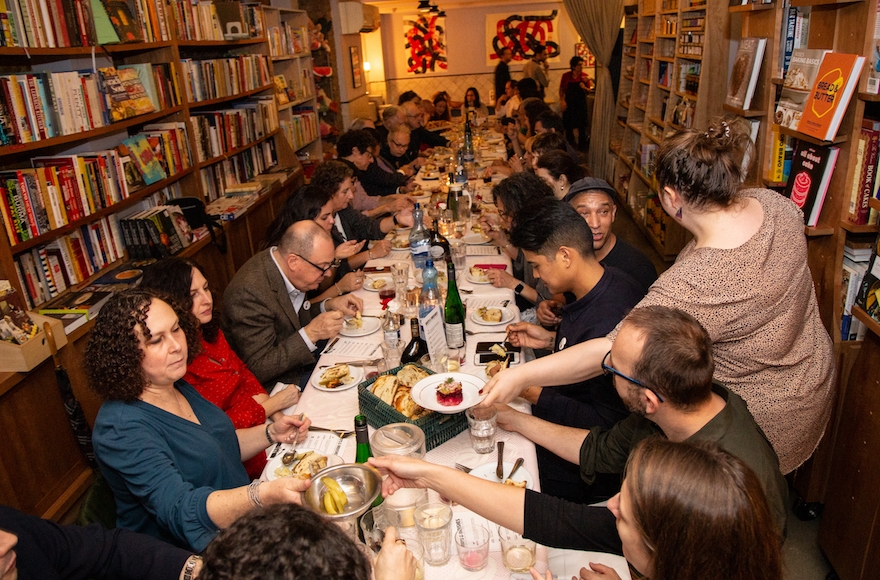 The Shabbat dinner was meant to reflect the life and customs of Jewish and Polish communities, and honor the ways the cultures have coexisted. (Meg Jones Wall)

For the Shabbat dinner, the duo baked a batch of cebularz and then braided the dough into classic six-strand challahs, incorporating poppy seeds and onion into the baked loaves. Thus the bialy challah was born.

The next course, a farmer’s market-sourced radish salad, evoked a typical Polish farmer’s market. The medley included parsley root (not to be confused with parsnip, which looks similar but tastes different). While easy to find in Poland, parsley root is uncommon in New York. Alpern had spotted the rare vegetable while Passover shopping this year at a Hasidic grocery in Brooklyn. She bought it, and made it last by pickling the parsley root in a saltwater brine, enabling the diners to enjoy its floral, slightly bitter flavor months later.

Then it was on to soup, which featured kreplach, the Jewish dumpling whose noodle-dough hearkens back to Italian influences on Polish cuisine (some of Poland’s earliest leaders were from Italy). Tucked into the triangular dumplings was smoked duck – something Polish Jews of yesteryear used because they smoked foods like goose and fish to preserve them for winter.

Yoskowitz, who co-founded the Gefilteria, said he was delighted he could use the Shabbat dinner both to share his experiences researching Jewish food in Poland and his own Polish-Jewish heritage.

“All of my grandparents were born in Poland. All made it to the United States after the war,” he said. “I would hear from my maternal grandparents about life in Poland before the war and how rich their lives were. Traveling back to Poland revealed to me much about my identity and my Polishness.”

The main course featured barley-stuffed cabbage rolls. In Poland, barley is the grain of choice, not rice, owing to the Polish agricultural landscape where barley thrives. These rolls, rather than topped with the usual sweet-and-sour tomato sauce, were ensconced in an earthy, savory mushroom sauce.

Malika said she passed on the usual tomato sauce because of its association with Poland’s communist period — a time when vinegar may have been the only thing available at the grocery store.

“We compromised on a mushroom sauce,” Malika said, “celebrating our deep connection with the land.”

The meal ended with Polish apple cake, or szarlotka, meant to represent the endurance of Polish identity and cuisine despite political and cultural division. Even when Poland was pulled apart by various political regimes throughout the 19th and 20th centuries, the apple cake persisted, and it remains one of the nation’s most loved foods. Malika’s version is spiced with ginger, tying it to Jewish and Asian heritage.

“It was meaningful to celebrate Shabbat together a week after the Pittsburgh shootings, but even more meaningful in a cross-cultural, multigenerational setting,” filmmaker Liz Nord said at the event. “And the delicious food didn’t hurt.”

Anna Domanska, director of the Polish Cultural Institute of New York, said the Shabbat dinner was meant to reflect the life and customs of Jewish and Polish communities, and honor the ways the cultures have coexisted. 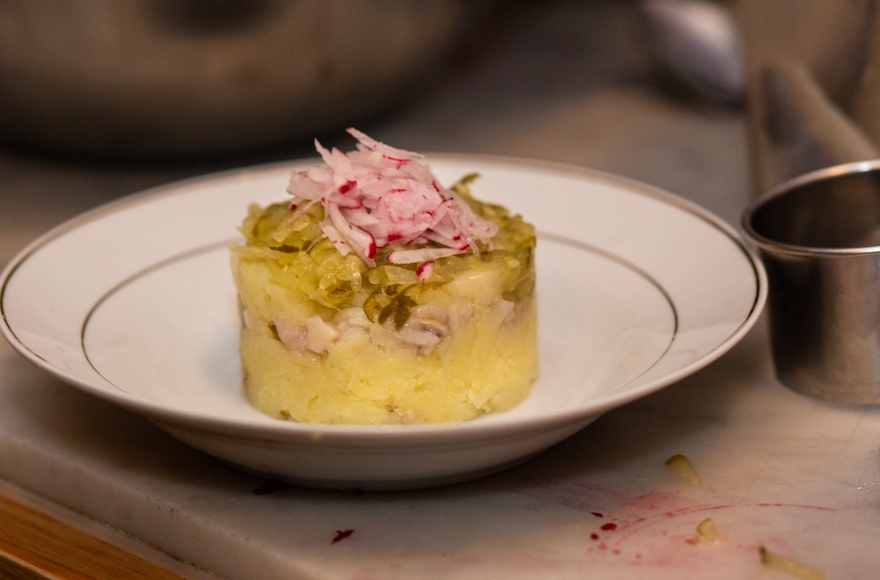 “We have lived together for centuries, exchanging different customs and traditions which intertwined to create something new and unique,” Domanska said.

Other centennial events being presented by the institute, a diplomatic mission of the Polish Foreign Ministry, are aimed at recognizing and celebrating the diversity of people that have shaped Poland’s landscape, culture and story. In New York, that means celebrating Jewish culture, too.

“Being asked by the Polish Cultural Institute to produce these meals in honor of 100 years of regained independence to highlight the diversity and shared roots of Polish cuisine felt like an incredibly powerful gesture toward healing and peace,” Yoskowitz said. “The fact that an arm of the Polish government was interested in recognizing the impact and influence of Jewish cuisine and culture during its centenary celebrations felt like a progressive step forward in the Jewish-Polish story.”