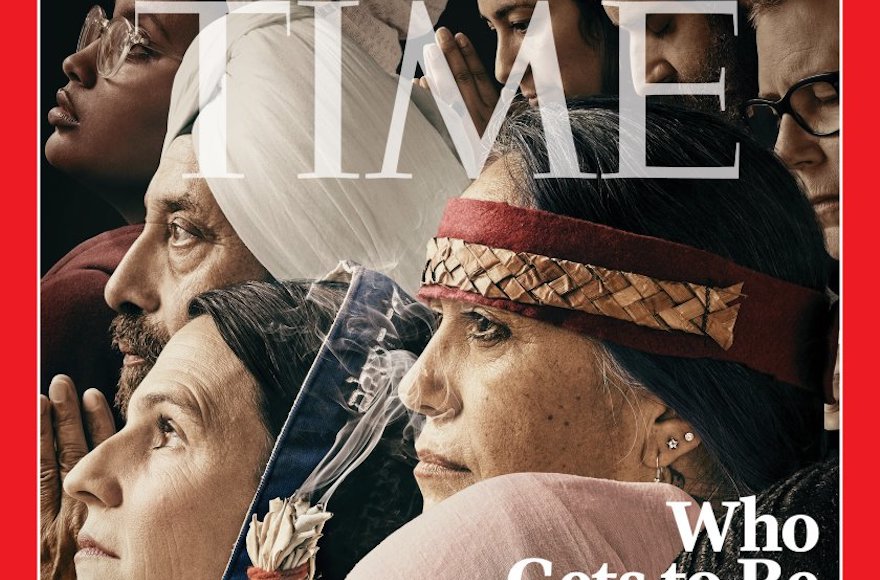 The cover, released last week, is based on a 1943 painting by Norman Rockwell titled “Freedom of Worship.” The painting, part of a series depicting the “Four Freedoms” articulated by President Franklin Delano Roosevelt, depicts people of different faiths in prayer. Brous is shown wearing a dark blue tallit with a traditional Hebrew blessing on it.

TIME’s new cover: "I love America. That’s why I have to tell the truth about it" https://t.co/gAdw8zxRDq pic.twitter.com/kFrKLuEPd9

Brous is the founder and senior rabbi of Ikar, an unaffiliated congregation in Los Angeles. The Conservative-ordained rabbi has gained prominence due to her political activism, and in 2013 she blessed President Barack Obama and Vice President Joe Biden at the Inaugural Prayer Service. In 2013, Newsweek and Daily Beast named her among the country’s top rabbis.

The Time cover was created by artist Hank Willis Thomas and photographer Emily Shur. Time explained that while the original Rockwell painting included figures representing Protestantism, Catholicism and Judaism, the series of paintings “barely brushes against the depth of American diversity at the time, much less today.”

“I hope that people feel that it’s an accurate representation of our everyday population now,” Shur told Time. “Even though I’m sure there’s someone we missed in there, I really feel 100% truthful when I say that we really have tried to get such a diverse group.”

Ikar’s website linked to the magazine cover with a quote from Brous.

“An honor to stand with clergy from all faiths in this beautiful reimagination of Norman Rockwell’s Freedom of Worship,” she said. “This is America’s next chapter: it is fierce, gorgeous, and fair. It is built on justice and mercy and it makes room for all of us.”