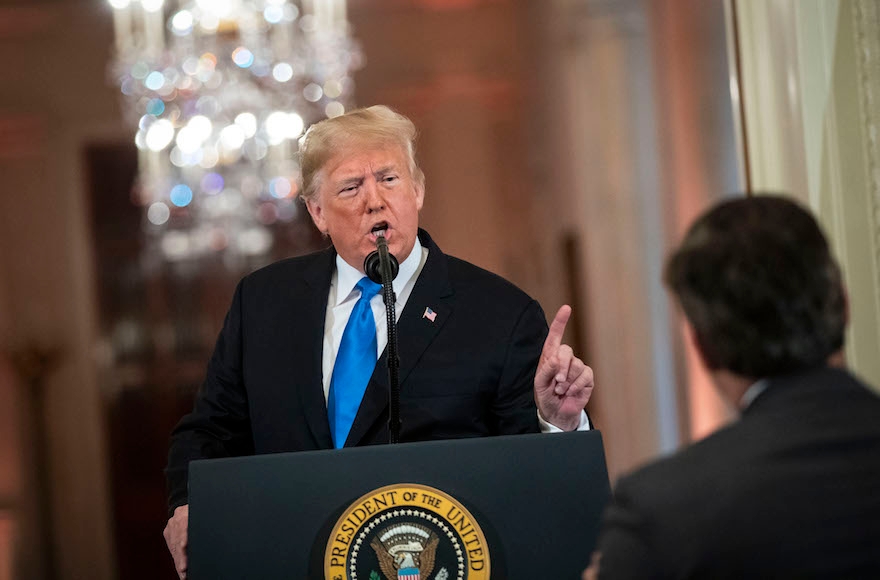 President Donald Trump gets into an exchange with CNN reporter Jim Acosta during a news conference a day after the midterm elections in the White House, Nov. 7, 2018. (Al Drago/Pool/Getty Images)
Advertisement

In the unusual statement, which contained many exclamation marks and began with the phrase “America First!” the president said that “[t]he crime against Jamal Khashoggi was a terrible one,” but remained steadfast in his support for Saudi Arabia.

“Our intelligence agencies continue to assess all information, but it could very well be that the Crown Prince had knowledge of this tragic event – maybe he did and maybe he didn’t!” Trump said.

“That being said, we may never know all of the facts surrounding the murder of Mr. Jamal Khashoggi,” said the president, appearing to contend the findings of this own intelligence agency. “In any case, our relationship is with the Kingdom of Saudi Arabia. They have been a great ally in our very important fight against Iran. The United States intends to remain a steadfast partner of Saudi Arabia to ensure the interests of our country, Israel and all other partners in the region.”

The statement also said that Saudi Arabia had last year “agreed to spend and invest $450 billion in the United States,” a figure few observers consider credible.

Trump also cited Israel earlier in the statement, in which he blamed Iran for the conflict in Yemen.

“Iran states openly, and with great force, “Death to America!” and “Death to Israel!” Iran is considered “the world’s leading sponsor of terror,” he said.

The president also said that the U.S. had “sanctioned 17 Saudis known to have been involved in the murder of Mr. Khashoggi, and the disposal of his body.”

Saudi agents killed Khashoggi last month after he entered the country’s consulate in Istanbul to fill out routine paperwork. Khashoggi, once close to the Saudi royal family, moved to the Washington, D.C., area in recent years. Writing for The Washington Post, he became a prominent critic of the family, particularly bin Salman.

Bin Salman has told Trump’s son-in-law, Jared Kushner, to whom he is close, that low-level officials who had gone rogue had killed Khashoggi.

That version has aroused considerable skepticism among Saudi watchers, considering bin Salman’s vast control over what happens in the kingdom.