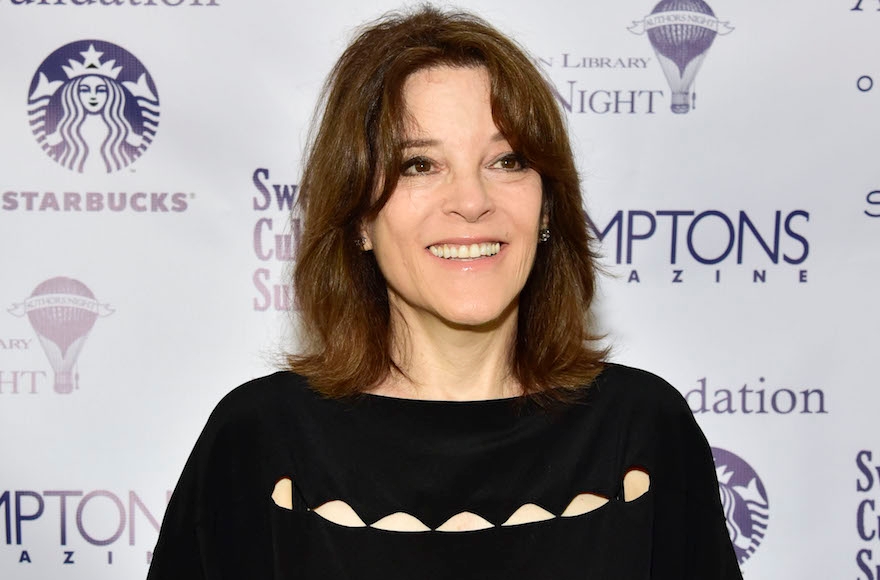 NEW YORK (JTA) — Had she received a better Jewish education, Marianne Williamson says, she might have become a rabbi.

Instead, Williamson has become one of the country’s best-known New Age self-help gurus, reaching millions of people over more than three decades in the public eye. She counts Oprah and Deepak Chopra among her pals.

Now Williamson, the author of a dozen books — four of them New York Times best-sellers — wants to extend her influence to the highest office in the land: She has announced a bid to run for the Democratic nomination for president of the United States.

She even has ideas about how to move toward peace between Israelis and Palestinians.

Should she win the presidency, Williamson, 66, not only would be the first woman president but the first Jewish one, though few seem to be aware of her Jewishness. Williamson quotes an array of religious thinkers in her popular spiritual — but post-religion — lectures.

She doesn’t seem to think that never having occupied elected office should be an obstacle.

“Seasoned politicians took us into the Vietnam War and Iraq and the greatest income inequality since 1929. Americans need to disenthrall ourselves of the myth of the political expert,” Williamson said during a talk at Manhattan’s Marble Collegiate Church on Nov. 20, a few days after announcing she was formally exploring a 2020 run.

“If the founders had wanted to say that a qualification for president was that you had been a senator or governor, they would have said that. They wrote you have to be at least 35 and born here. That’s it,” she said, with the barest hint of a Southern twang.

“Can I raise the hundreds of thousands of dollars even needed to start a campaign? We’ll see,” she told the audience.

The next day, in an interview with JTA in her glossy Midtown Manhattan apartment, Williamson said that she had raised two-thirds of her $300,000 goal in the first few days since MarianneForAmerica went live.

In her talks, books and recordings, Williamson blends psychology and spirituality with a focus on self-awareness and forgiveness as the basis of happiness and successful relationships.

Unlike most of her colleagues in the self-help space, Williamson has been politically oriented — a stance sharpened since Donald Trump was elected president in 2016. She ran for a California House seat in 2014, coming in a respectable fourth place though she ran as an independent without party backing. Her book “Healing the Soul of America” has just been reissued in an updated 20th anniversary version. In it she distills her vision of spiritually aware politics, covering topics from the Constitution to economics to racial reconciliation.

A commitment to social justice causes goes back even longer.

In 1989, in the early days of the AIDS crisis, Williamson established Project Angel Food in Los Angeles to provide meals to seriously ill people. In 2004 she co-founded The Peace Alliance, a grassroots educational endeavor that teaches peace- building skills. She is no longer affiliated with the latter organization; she recently hosted a fundraising event for Project Angel Food and was honored at its 25th anniversary gala.

For all of her talk about God and Jesus and Buddha, Williamson is a post-religion spiritual leader.

Many of those filling the pews of Marble Collegiate every other week and the seats of Los Angeles’ Saban Theater for her monthly talks there are young adults. Those who get Williamson’s attention during the Q&A session following her Marble Collegiate talks typically gush, and sometimes break into tears, at the chance to share a personal problem with her. Williamson at times will pray aloud for the young person who has just shared a deeply personal challenge, making the gathering feel a bit like a Christian healer’s tent revival.

Williamson’s fans are part of the growing population of Americans who, according to the Pew Research Center, identify as “spiritual but not religious.”

Following a talk by Williamson this fall as part of her Integrative Politics series at the Deepak HomeBase  — a loft-like space featuring statues of Buddha and Ganesh inside the ABC Carpet & Home store — a young woman said that she was raised without any religion and attends Williamson’s talks because they give her something she needs but can’t quite name, she told JTA.

On an overcast November day, Williamson has invited a reporter into her home and is dressed in her usual urban-chic uniform of head-to-toe black. There is a mezuzah on her doorpost and a large golden Buddha inside.

Being Jewish is something Williamson references frequently, if fleetingly, in public appearances.

Still, there are times and places that she identifies strongly as a Jew. On Nov. 4, her keynote address to several hundred Muslim and Jewish women at the Sisterhood of Salaam-Shalom conference in Doylestown, Pennsylvania, was a departure from her usually controlled style of speaking. Just a few days after the Oct. 27 murder of 11 Jews in their Pittsburgh synagogue, Williamson made an emotional call to political arms.

“With the history of Muslims and the history of Jews and of blacks and of immigrants it is time, it is time for something fierce to rise up out of us. To say ‘you did it to my grandparents and you are not going to do it to my kids’!” Williamson shouted to a standing ovation.

Williamson grew up in Houston attending Congregation Beth Yeshurun, a Conservative synagogue that was hit hard by 2017’s Hurricane Harvey. She went to Hebrew school there while attending local public schools, and recalled joining a Jewish sorority while at Bellaire High.

At synagogue one Saturday in her mid-teens, Williamson heard Rabbi William Malev preach against the war in Vietnam.

“I was very impressed how relevant he was. It was my first experience of the pulpit used as such a powerful force for social commentary,” she said.

At California’s Pomona College she majored in theater and philosophy — no surprise there — before dropping out in her junior year. She moved to New Mexico “to live in a geodesic dome,” she said, then to Austin, Texas. She spent her 20s leading what she calls “a nomadic existence,” moving between San Francisco and New York, where she worked as a waitress, temp and cabaret singer.

Her career as a spiritual mentor began at 31 while living in Los Angeles and teaching “A Course in Miracles” at a center for metaphysical study; she had talked her way into a job there. People started showing up to listen.

Williamson was the first, and is likely the best-known, popularizer of “A Course in Miracles,” an overtly Christian, God-focused self-improvement book authored by Helen Schucman and first published in 1976. Despite the author’s Jewish name (each of her parents had a Jewish parent), Schucman was baptized into Christianity at age 13, and her book blends Christian religious teaching and psychology. Schucman claimed that Jesus dictated it to her. Still, Williamson insists that “Miracles” is “not a religious text, but rather a self-study program of spiritual psychotherapy.”

Soon after the book was published Williamson, who was then in her 20s, picked up a copy sitting on the coffee table in a New York City apartment where she was attending a party.

“I saw Christian terminology and being Jewish, I put it right back down,” Williamson said.

A year later, Williamson’s then-boyfriend gave her a copy. This time she read it through and began doing the accompanying workbook exercises. She continues to do the exercises daily during the time she sets aside for meditation and reflection. She also practices Transcendental Meditation.

Williamson has been God-focused since she was a young girl in Houston, and though her family was culturally Jewish rather than religious, she said the Shema every night. Then, she said, “I’d have a conversation with God. I’ve always had a thing about God.” Since she was a teenager, “it’s been interest in religion whether it’s Eastern or Western, traditional or esoteric.”

Williamson gave birth to her daughter, India Emma, in 1990, at 38. While Williamson was very briefly married, she has never publicly identified India’s father.

Now 28, India lives in London and is pursuing a doctorate in history. India “is very involved in her synagogue,” said Williamson, and has a more traditional Jewish practice than she does. 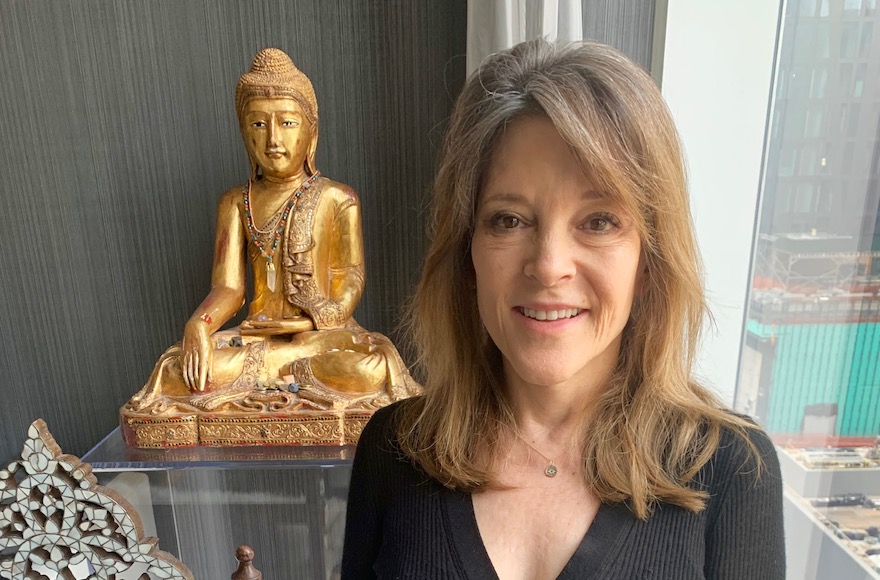 On the High Holidays this year, Williamson went to an Orthodox synagogue that she happened upon in New York’s Chelsea neighborhood. But it didn’t do much for her spiritually, she acknowledged. Though Williamson has lived in New York for the past two years, she is unaware of the dynamic, heterodox city congregations that would more likely resonate with her.

Her career really took off when she wrote “A Return to Love,” which she described to JTA as “a CliffsNotes version of ‘A Course in Miracles.'” After its publication in 1992, Oprah Winfrey read it, bought 1,000 copies and had Williamson on her wildly popular television talk show. In the years since, Williamson has continued to be one of Oprah’s frequent guests.

Williamson was 60 when she made her first trip to Israel, and said she’s been back four or five times in the past six years.

“It is very emotional to be in Israel,” she said.

Williamson said she has visited the usual tourist sites and the West Bank. She’s also spent time at a Hand in Hand School, where Israeli and Palestinian citizens of Israel are educated together from the time they are young children.

Like much of what Williamson says, her perspective on Israeli-Palestinian reconciliation sounds at once inchoate with a ring of hard truth to it.

“I don’t think the ultimate answer will be about settlements or checkpoints,” she said. “The work of the genuine peace builders must be on the level of the heart.” She also said that “until the U.S. returns to where it can be considered an honest broker” by the Palestinians, as well as Israelis, it won’t be able to play a constructive role.

Williamson quoted Theodor Herzl, the father of modern Zionism, saying “’It is true that we aspire to our ancient land. But what we want in that ancient land is a new blossoming of the Jewish spirit.’”

“He was a whole person thinker, addressing the spiritual as well as the political aspirations of the Jews,” she said. “And that’s what the new Zionism needs to concern itself with” today.

Does Williamson have a real shot at the presidency?

“I can’t really handicap her chances since she is new to politics, but I can say the race right now is wide open,” veteran Democratic pollster and campaign consultant Mark Penn told JTA.

Penn said 10 to 20 people have indicated an intention to run, though only two — John Delaney and Richard Ojeda, both current politicians — have formally declared their candidacies. Pressed about her chances, he said, “becoming president is by its very nature a low probability profession.”

Then again, so is the likelihood of a Jewish girl from Houston becoming one of America’s best-known spiritual leaders.

“I don’t believe in traditional politics,” Williamson said. “They must be overridden. We need a more inspiring and compelling conversation about our democracy and our future. The foundations of our democracy are being eroded. We need a whole-person politics that speaks to emotions and psychology.

“The American people are not the problem. Our broken democracy is the problem,” she said. “The fact that money rather than the will of the people dominates policy, that is the problem.

“The problem is that we have a tyranny by the minority. The policies of this administration do not represent the consciousness of the American people.”

And, Williamson said, “it would be nice to have a new chapter.”