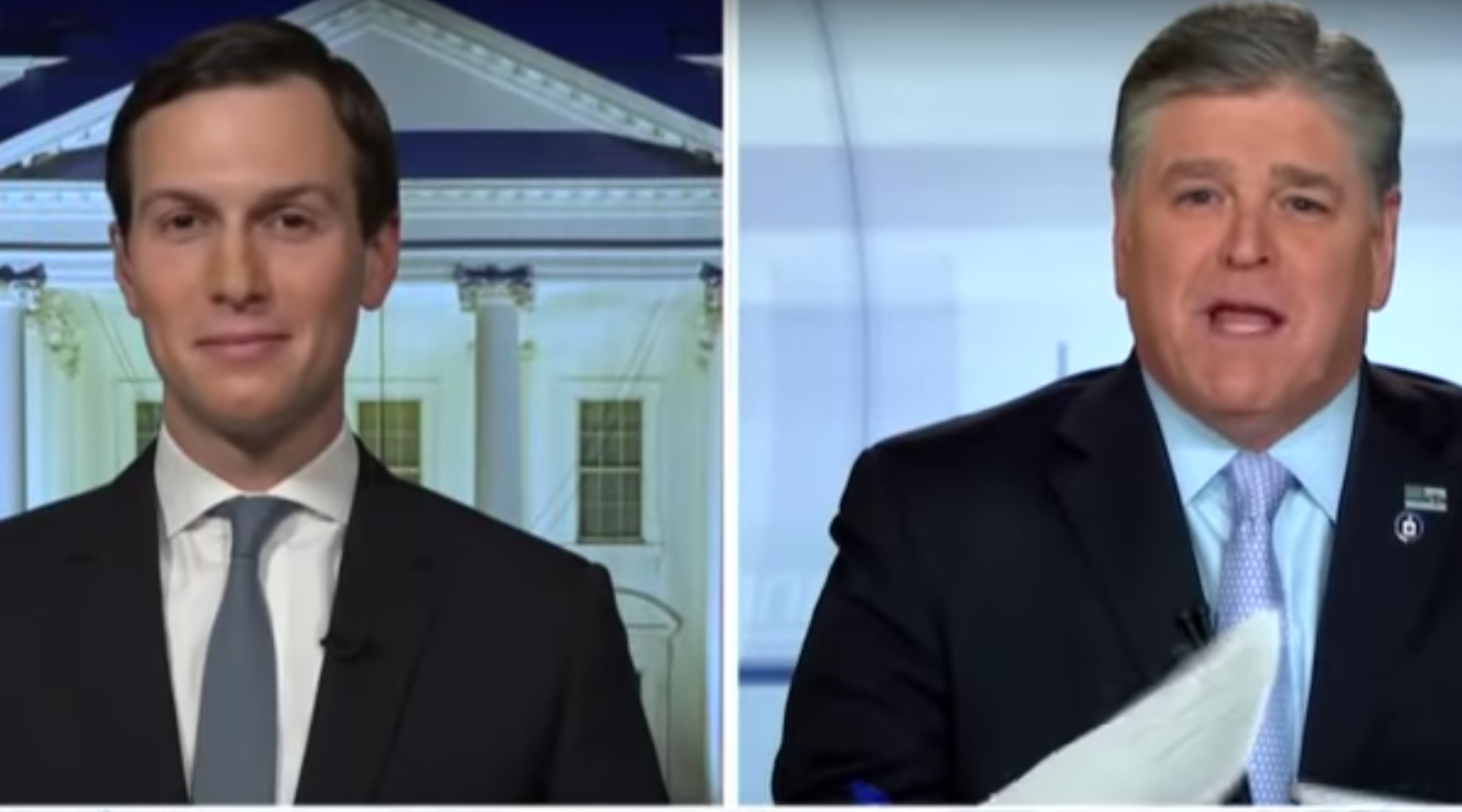 WASHINGTON (JTA) — Jared Kushner, the presidential son-in-law and adviser, rarely speaks in public. No surprise, then, that a rare appearance on cable news TV was with a friendly network, Fox News, with a friendly interviewer, Sean Hannity.

Kushner seemingly said little about the Israeli-Palestinian peace deal he hopes to strike, but in reading between the lines, some nuggets emerge: The release of the proposal is not absolutely certain, and statehood for the Palestinians seems for now to be a nonstarter. But Kushner also recognizes that he can’t get much else done in the region without an Israeli-Palestinian deal.

On Hannity’s show Monday night, the host and Kushner ran through three issues. The first two were President Donald Trump’s efforts to replace his chief of staff after nearly two fraught years with John Kelly (Trump is looking for someone with “great chemistry,” Kushner said) and a rare impending legislative win for Trump, passing prison reform.

Then Hannity asked whether tensions over the murder of Saudi dissident Jamal Khashoggi were overwhelming Kushner’s quest for what his dad-in-law calls the “deal of the century” between Palestinians and Israelis.

Saudi officials murdered Khashoggi in Turkey, and U.S. intelligence agencies believe the Saudi crown prince, Mohammed bin Salman, ultimately was responsible for the operation. Kushner reportedly has led the effort within the administration to let the crown prince off the hook; the two men have struck a close friendship and political alliance.

Kushner quickly got Khashoggi out of the way.

“I think our intelligence agencies are making their assessments and we’re hoping to make sure that there’s justice brought where that should be,” he said.

The intelligence agencies have already made their assessment, holding the crown prince, known by his nickname, MbS, responsible.

Pivoting to Middle East peace, Kushner said, “We’re focused now on the broader region, which is figuring out how to hopefully bring a deal together between the Israelis and the Palestinians.”

Kushner and his team – top negotiator Jason Greenblatt and U.S. Ambassador to Israel David Friedman – have been focused for two years on a deal, so this isn’t exactly new. Trump said in September that he wants to see a deal by January.

There’s a not unsubstantial chance we may never see this thing. “And we’re hopeful in the next couple of months we’ll put out our plan, which again not every side is going to love, but there’s enough in it, and enough reasons why people should take it and move forward,” said Kushner, whose second “hopeful” in 30 seconds sounded to many as less than hopeful.

Trump may want this deal, but insiders say its prospects of success are virtually nil given the Palestinian Authority’s unwillingness to participate since Trump recognized Jerusalem as Israel’s capital a year ago, and the continued preeminence of the rejectionist Hamas, a terrorist group, in the Gaza Strip.

The Trump administration, reportedly at Kushner’s behest, has severed all assistance to the Palestinians as an incentive to get them back to the table. It hasn’t worked. Kushner also hoped the Saudi crown prince would get the Palestinians on board, but even before his Khashoggi troubles, the Palestinian leadership was disinclined to heed MbS.

So a dead-on-arrival peace process may be the last thing Trump needs as he heads into a Congress in which the Democrats control the U.S. House of Representatives and are pledging many investigations, including into Trump’s alleged Russian ties.

Israeli Prime Minister Benjamin Netanyahu, who has been close to Kushner’s family for years, may also be less than enthused for electoral reasons of his own. Netanyahu must call a vote by next fall, and is feeling more pressure – at least for now – from his right flank than his left. Giving in to the slightest of Trump-demanded concessions could harm his prospects.

Don’t mention statehood. “I’ve been saying a lot that you shouldn’t be hijacking your children’s’ future because of your grandparents’ conflict,” Kushner said. “This is a conflict that has been going on for way too long, and the way that people are living in Gaza and in the West Bank right now is not acceptable and there’s a lot that we can be doing to improve their quality of life, but it comes with resolving some of these core issues.”

Palestinians for decades have said that statehood was a baseline for any deal. Trump has retreated from years of U.S. policy that calls Palestinian statehood a necessary outcome. Under Trump, alleviating Palestinian suffering takes priority over political outcomes.

Adamant about linkage. Kushner persists in the interview in his one substantive difference with Netanyahu, suggesting that solving the Israeli-Palestinian issue first is the key to regional diplomacy. Netanyahu has said that resolving the Palestinian issue may not be critical to advancing Israel’s other interests and rejects linking a peace deal to other regional issues. Kushner made clear a year ago that he is hewing to the more conventional wisdom that the Palestinian issue comes first, and it appears he has not changed his mind.