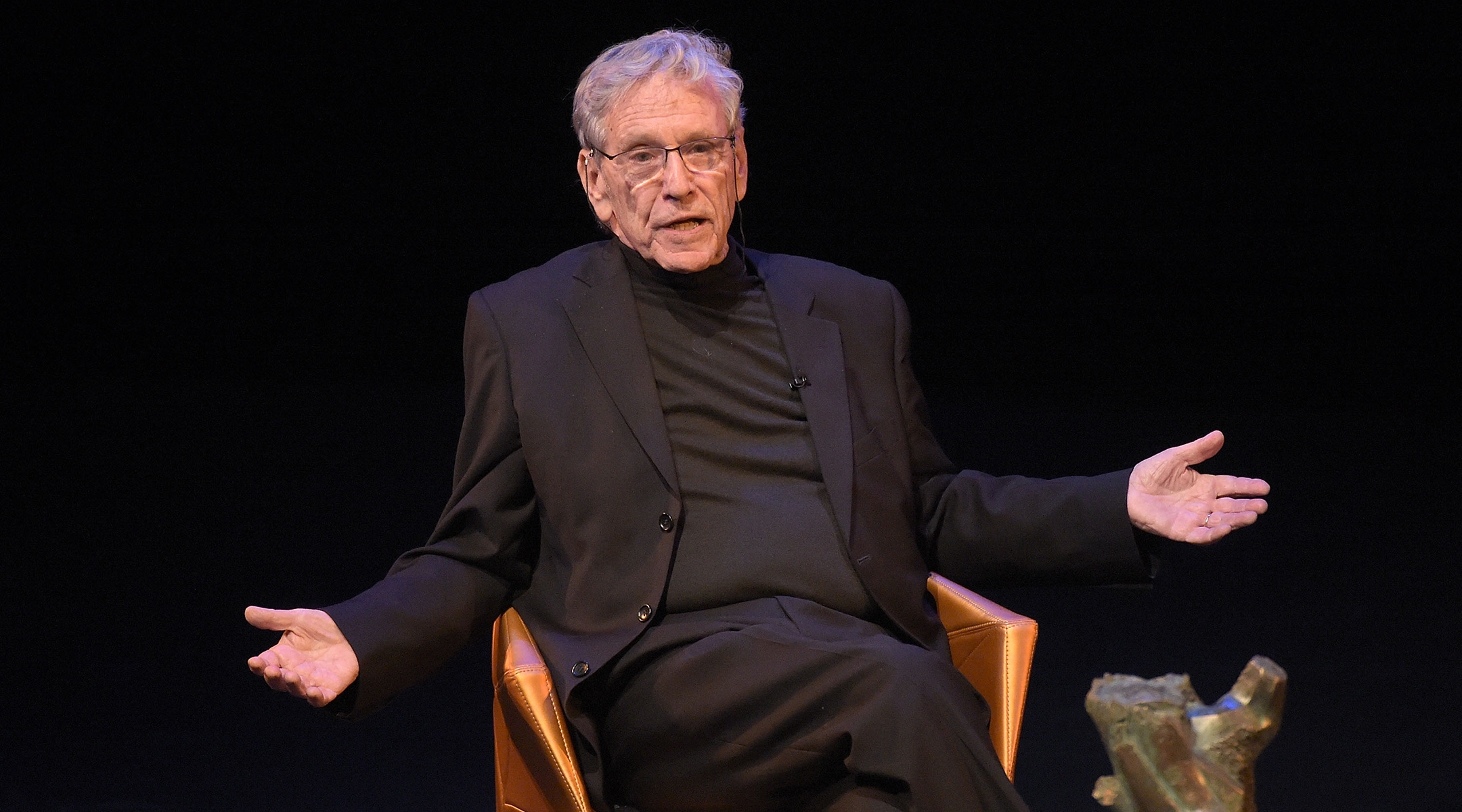 Amos Oz, shown here in 2015, often blurred the personal and the political in his writing. (Jason Kempin/Getty Images)
Advertisement

(JTA) — Amos Oz would often speak in the kind of tossed-off epigrams that come only with a lot of practice. But just when you wanted to smack him for his breezy erudition, he would redeem himself with a flash of spot-on — and hilarious — self-awareness.

In 2011, speaking at the 92nd Street Y about the novel he’d just published in English, “Scenes From Village Life,” Oz said that 99 percent of the typical media coverage of Israel involves extremist settlers, ultra-Orthodox fanatics and brutal soldiers, “and 1 percent saintly intellectuals like myself.”

Oz died Friday at age 79, having won nearly every literary prize short of the Nobel and having become perhaps Israel’s most widely translated author. If Jews were in the canonization business, Oz would have earned his wings (halo? robe? my theology is shaky) on the basis of “A Tale of Love and Darkness,” his 2002 novel cum memoir. Like so much of what he wrote, the book is not just autobiographical, but a biography of Israel itself. Although his story ends before he is out of his teens, the young Amos bears witness to the destruction of European Jewry, the height of the British mandate, a Hebrew renaissance in Jerusalem, the great Zionist debates (and debaters) of the day, the rise of the kibbutz movement and the birth of the state.

The book’s brilliance is its blurring of personal memoir and national drama, as in an unforgettable description of the night in 1947 when the United Nations voted to partition Mandatory Palestine, giving international legitimacy to a Jewish state. His father, Yehuda Klausner, still “drenched in sweat from the crush of the crowds” celebrating the U.N. vote, crawls into bed with the young narrator. He tells the boy of the “hooligans” who tormented him and his brother back in Odessa and Vilna, and how the bullies forced the boy’s grandfather “down on the paving stones and removed his trousers too in the middle of the playground.”

And still in a voice of darkness with his hand still losing its way in my hair (because he was not used to stroking me) my father told me under my blanket in the early hours of November 30, 1947, “Bullies may well bother you in the street or at school some day. They may do it precisely because you are a bit like me. But from now on, from the moment we have our own state, you will never be bullied just because you are a Jew and because Jews are so-and-sos. Not that. Never again. From tonight that’s finished here. Forever.”

In his 92Y talk, Oz explained that the book was neither a memoir nor a novel, but in fact a “tale,” a designation that unfortunately has no category in the Library of Congress. Instead, “A Tale of Love and Darkness” combines Oz’s strengths as both a novelist and a writer of impassioned political nonfiction — as he often would put it, he had two pens on his desk, “one pen to tell stories and another pen to tell the government to go to hell.”

If quips like that sound rehearsed — well, considering his body of work, Oz earned a pass. Besides, you can’t plagiarize yourself. And what quips they were! Asked why so many of his stories seemed so downbeat, he would reply, “If I were to sum up my books in one word, I would say they are about ‘families.’ If you gave me two words, I would say ‘unhappy families.’” Explaining what makes for a good story, Oz would say that a bridge that carries thousands of cars each day is no story at all.

“It is only when the bridge collapses that the story begins,” he said.

“The only way to keep a dream intact is never to live it out,” he said. “Israel is a dream come true, and therefore it is disappointing.”

Inevitably with Oz, Israel’s left-wing conscience as well as perhaps its greatest writer of fiction, there was the temptation to read politics into his prose.

“There are political overtones,” he would acknowledge when asked whether this character or that setting was meant to be a stand-in for one Israeli crisis or another. When he tried to deny such meanings, he said, “I am wasting my time. People will see it as an allegory.”

Oz died at a time when so many of the things he stood for — a vital Israeli left, a robust peace process, a vision for sharing the land — are in retreat, if not dead and buried. But even until the end, he never gave up trying. His latest book, “Dear Zealots: Letters from a Divided Land,” published last month in English, contained essays on the rise of zealotry in Israel and around the world.

Discussing it with The Washington Post, Oz insisted that neither he nor the book was pessimistic. And in doing so, he seemed to be passing a baton.

“Politically speaking, I have been engaged and involved in writing articles, making speeches for 60 years,” he said. “Now it is my time, not to retire but to provide my ammunition, my experience to the younger generation and let them take it from here.”