ATHENS — In a small, nondescript classroom in Greece’s capital city, 10 Jewish eighth-graders study a biblical text about Jacob and Esau under the guidance of Rivkah Carl, a Jewish teacher from Teaneck, New Jersey.

The students chatter loudly in Greek among themselves, though the language of instruction is English. In an adjacent classroom, nine kids — each wearing headphones and sitting in front of computer monitors — listen as their Israeli instructor teaches them Hebrew.

But this is no Jewish school. In Athens’ dwindling Jewish community, now at about 3,000 members, there simply aren’t enough children to support a Jewish middle or high school.

So community leaders came up with a unique solution: a special Jewish track at the prestigious American College of Greece, a private school founded by Christian missionaries in 1875 with a middle school and high school division called the Pierce School.

“We are very happy to have this program here in Greece,” said Nina Negrin, whose 12-year-old daughter, Melina, attends the school. “For many years there was no continuation of Jewish education after age 12. Anything to do with Judaism just stopped suddenly. Now they continue their Jewish education and they stay together. These things are very important to us, not only as parents but also as members of the Jewish community.”

The project, known as the Pierce Jewish Studies Program, combines Jewish studies with informal educational activities like field trips to nearby synagogues. Melina and her class took a day trip recently to the synagogue in Chalkida, a charming town north of Athens on the island of Evia. Next up was a visit to Rhodes to learn about the island’s rich Jewish history. 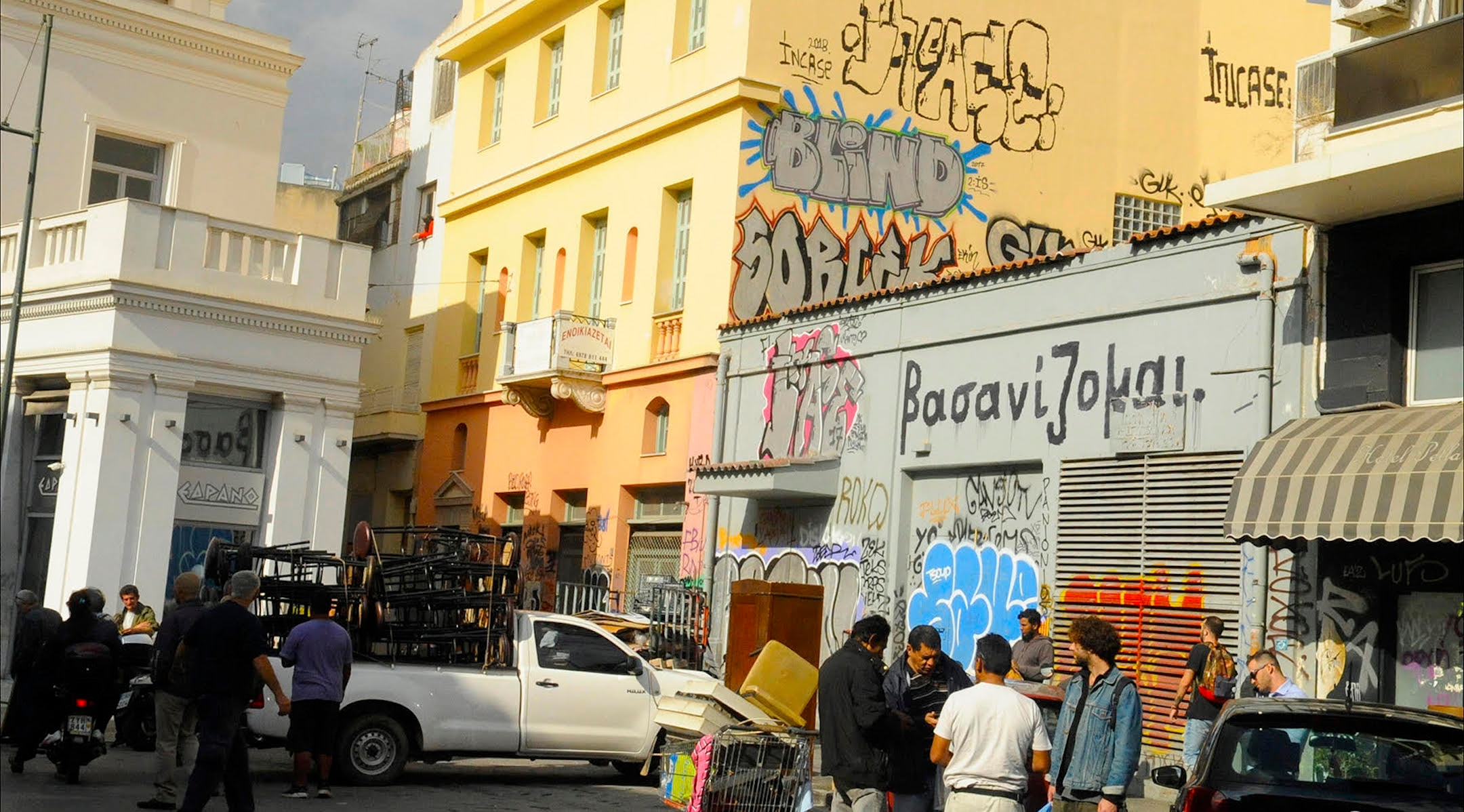 Greek Jews, struggling with their nation’s financial crisis and other problems, are increasingly choosing to emigrate. (Larry Luxner)

Now in its second year, the program represents an innovative approach to a problem faced by many small Jewish communities in Europe: how to keep Jewish education alive in cities where stand-alone Jewish high schools aren’t practical or possible due to the small size or relative secularity of the local Jewish community.

“As Jewish communities like ours get smaller, there needs to be some way to continue Jewish education without necessarily having your own Jewish school,” said Minos Moissis, president of the Jewish Community of Athens.

The need for the program in Athens was particularly acute. Economic hardship and violence — from the far left and the extreme right — have led growing numbers of Greek Jews to emigrate over the past decade. Moreover, Greek public schools require the study of Greek Orthodox Christian texts and prayers; Jews are excused only if they publicly declare their Jewish identity in the classroom. That’s a tall order for 12-year-olds in a country with the highest levels of anti-Semitism in Europe, according to the Anti-Defamation League.

The Jewish track at Pierce both shields the students from this challenge and offers Jewish education beyond primary school.

The program, nicknamed the Athens Project, has 32 students enrolled.

“The Athens Jewish community only has a primary school. After that, kids lose their connections, so we’re trying to find ways to keep them together until they’re at least 18,” said Iakovos Atoun, the community’s director of Jewish studies.

The Jewish program would not have been possible without the impetus of businessman and philanthropist Ronald Lauder, the World Jewish Congress president who in 2017 challenged the Athens community to develop the program and then put up the money to support it.

The Ronald S. Lauder Foundation, which subsidizes tuition for the Jewish students at Pierce, also supports the Lauder Jewish Community School of Athens, a primary school located in the upscale suburb of Paleo Psichiko, and an online Jewish learning program with some 150 students of all ages.

“If this gift hadn’t come through, the majority of our kids would have ended up going to public school,” said Joanna Nahmias, a member of the Lauder School’s board of directors. “There they would have to stand up in a class of 30 children, completely unprotected, say ‘I’m Jewish’ and explain why they’re not going to say the morning prayers.”

At Pierce, instead of Jesus or Virgin Mary portraits — common in Greek classrooms — there are portraits of famous American novelists like John Steinbeck and Ernest Hemingway.

The American College of Greece is the oldest and largest U.S.-accredited college or university in Europe. Its Pierce division, which starts in the seventh grade, is considered one of the country’s best private high schools. It’s also one of the few that does not hold classes on Saturdays.

Besides math, physics, chemistry, literature, Greek and English, the Jewish kids at Pierce study Hebrew, Jewish history and Jewish traditions. The Jewish subjects come in two hours of instruction twice a week at the end of the regular school day. 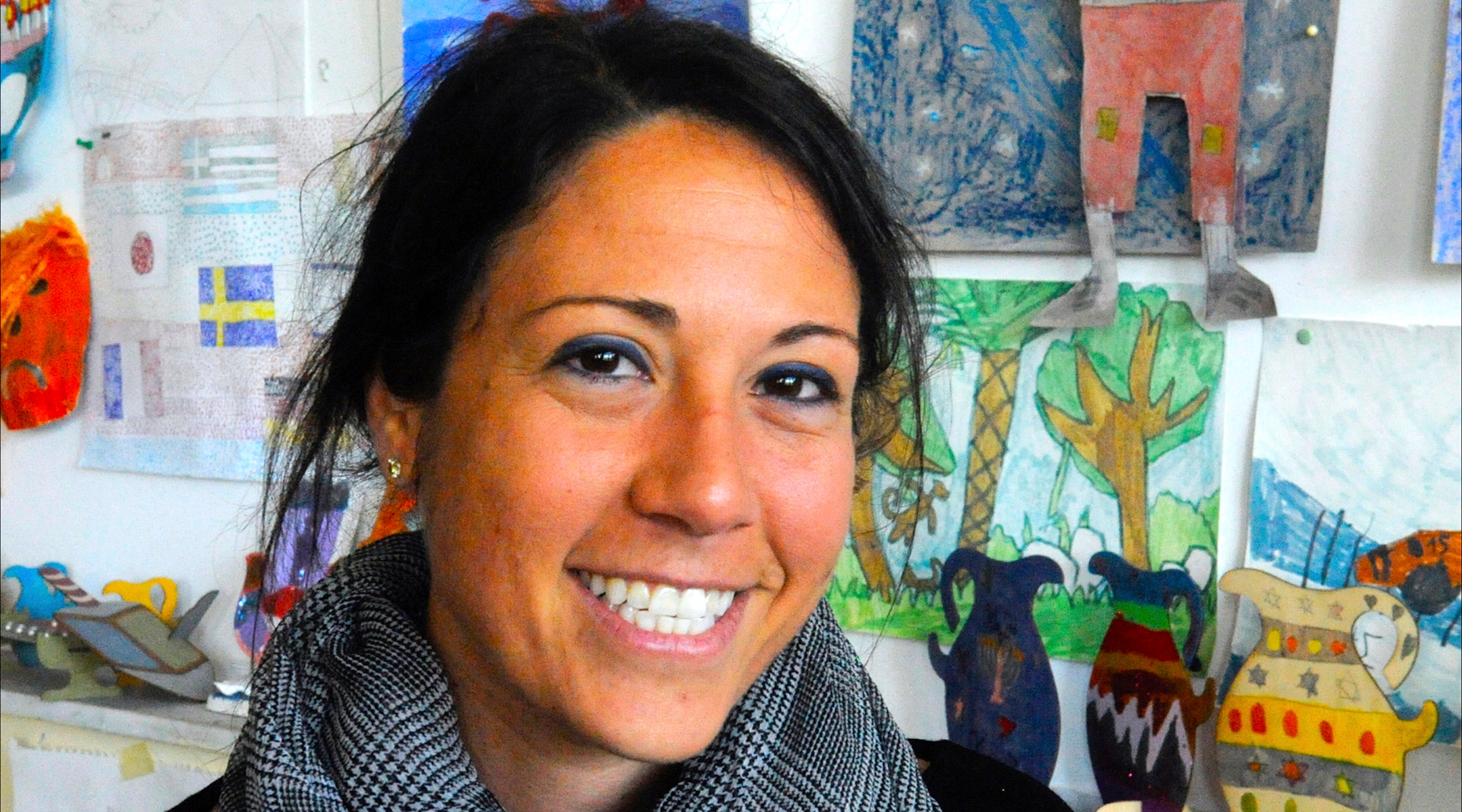 Rivkah Carl, a native of Teaneck, N.J., is one of the Jewish teachers at Pierce’s unique Jewish high school program. (Larry Luxner)

The program includes two subsidized Israel trips: an 11-day tour of the country the summer after sixth grade, and another one during high school to give Greek kids shopping for universities an opportunity to explore schools in Israel.

But emigration to Israel is not the ultimate goal, Nahmias says.

­“Israel and Greece are becoming very strong business partners — in energy, defense and agriculture,” she said. “If these children know how to speak Hebrew, they’ll have an advantage over everyone else.”

Greek Jews are going through a challenging period. The country is still reeling from the 2009 financial crisis, which pushed unemployment rates above 25 percent, nearly forced Greece out of the Eurozone and ravaged the life savings of millions of Greeks — including many previously wealthy Jews.

“Our community had always been self-sustaining,” Nahmias said. “Over the years we’ve donated more than $40 million to Israel. But then suddenly wealthy, prominent Jews started needing aid because their businesses went bankrupt.”

She recalled how widows would sell their late husbands’ gold rings to raise money for the Jewish primary school.

The financial crisis coincided with a surge in nativist sentiment and anti-Semitism. The neo-Nazi Golden Dawn party captured 7 percent of the vote in the September 2015 parliamentary elections, and a 2014 ADL survey found that 68 percent of Greeks harbor anti-Semitic attitudes — the highest levels of any country in Europe.

To keep the school viable, the community voted 10 years ago to open enrollment to any child with at least one Jewish parent. Over half the school’s students come from interfaith marriages.

Nevertheless, more than 90 percent of graduates from the Jewish primary school enroll in the Jewish track at Pierce — an astonishing rate given the highly assimilated nature of Greece’s Jewish community. The special partnership between Pierce and the Jewish community ensures that the Jewish kids get spots at the competitive school, and tuition subsidies from the Lauder Foundation of 25 to 100 percent ensure they can afford it.

“Before this program started, the Lauder Foundation told us, ‘If you have a good idea about how to keep your youth connected, we’re willing to invest money in that,’” recalled Atoun, the director of Jewish studies. “But it was very difficult to build a new high school only for Jewish children. The only other option was to incorporate the students into an existing, reputable school, but also give them some Jewish education.”

Ultimately, Atoun said, the project is about ensuring a Jewish future in Greece.

“If we don’t help our children to develop a strong, proud Jewish identity we will lose them, and that will be the end of our community,” Atoun said.

“We didn’t survive here in Greece for 2,000 years through challenges and tragedies only to have our Jewish future slip from our hands. We’re working hard to make sure that Jews in Greece have not just a great past, but a great future.”