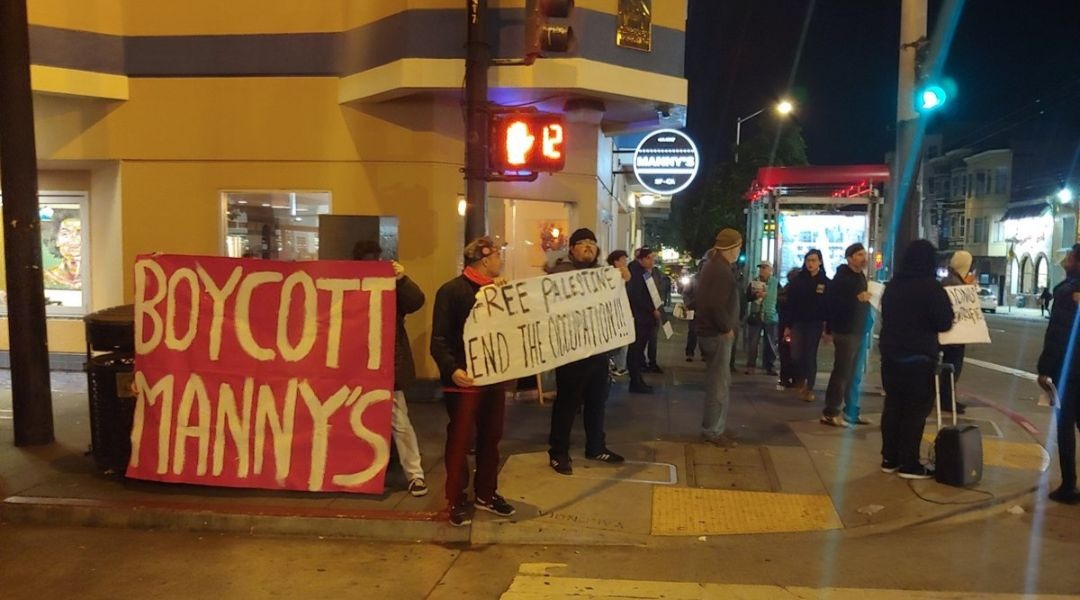 Protesters march in front of Manny's Cafe in the Mission District of downtown San Francisco on Dec. 26, 2018, calling owner Emmanuel Uekutiel a "gentrifier" and a "Zionist" for his support for the Jewish State. (Hen Mazzig/Facebook)
Advertisement

(JTA) — Manny Yekutiel opened his eponymous Manny’s in November, calling the Middle Eastern cafe and restaurant in downtown San Francisco a “civic social gathering space.” His goal for the Mission District eatery was “to create a central, accessible and affordable place to go to become a better informed and more involved citizen,” he told the San Francisco Examiner.

Manny’s has earned praise for hosting talks with speakers on issues ranging from Black Lives Matter to urban sustainability.

But Yekutiel, who is Jewish, is being protested weekly, accused of espousing “racist, Zionist, pro-Israel ideals.” His café has been vandalized and painted with anti-Semitic and anti-Israel slogans, according to reports.

The Lucy Parsons Project, a self-described “radical black queer direct action group fighting anti-blackness in the Bay Area,” in December called on the public to “boycott Manny’s and its ‘woke-washing’ of the Mission.”

In a letter to the media, the project said “the proprietor of Manny’s, Emmanuel Yekutiel, has unequivocally espoused racist, Zionist, pro-Israel ideals that we will not tolerate or accept in our community. … We will not tolerate gentrifiers and Zionists attempts at invading and destroying our community through ‘woke-washing’!!”

Other groups that have participated in the anti-Manny’s protests include the Black and Brown Social Club, Gay Shame and the Brown Berets.

Yekutiel reportedly has met nearly all the requirements of United to Save the Mission, a coalition of more than a dozen neighborhood nonprofits and activist groups. They include bilingual signage and staff, moderate prices (a cup of coffee is $1.75) and food prepared by a nonprofit employing homeless, formerly incarcerated and low-income community members, who earn all the food revenue. Community groups can use the space for free. He was asked to have awnings to make it more welcoming for Latino families, but has not installed them, according to The Mission Local.

“Yekutiel’s belief in the Jewish State’s right to exist is, it seems, the only accurate allegation made against him,” columnist Joe Eskenazi wrote Monday in the Mission Local.

While he supports Israel’s right to exist and celebrates the Jewish state, Yekutiel has said he does not support everything the Israeli government does and disagrees with its treatment of the Palestinians.

His father fled Afghanistan for Israel, according to the San Francisco Examiner.

The cafe has a mezuzah on the door, the Forward reported.