How going to synagogue regularly turned me into a dumpster diver 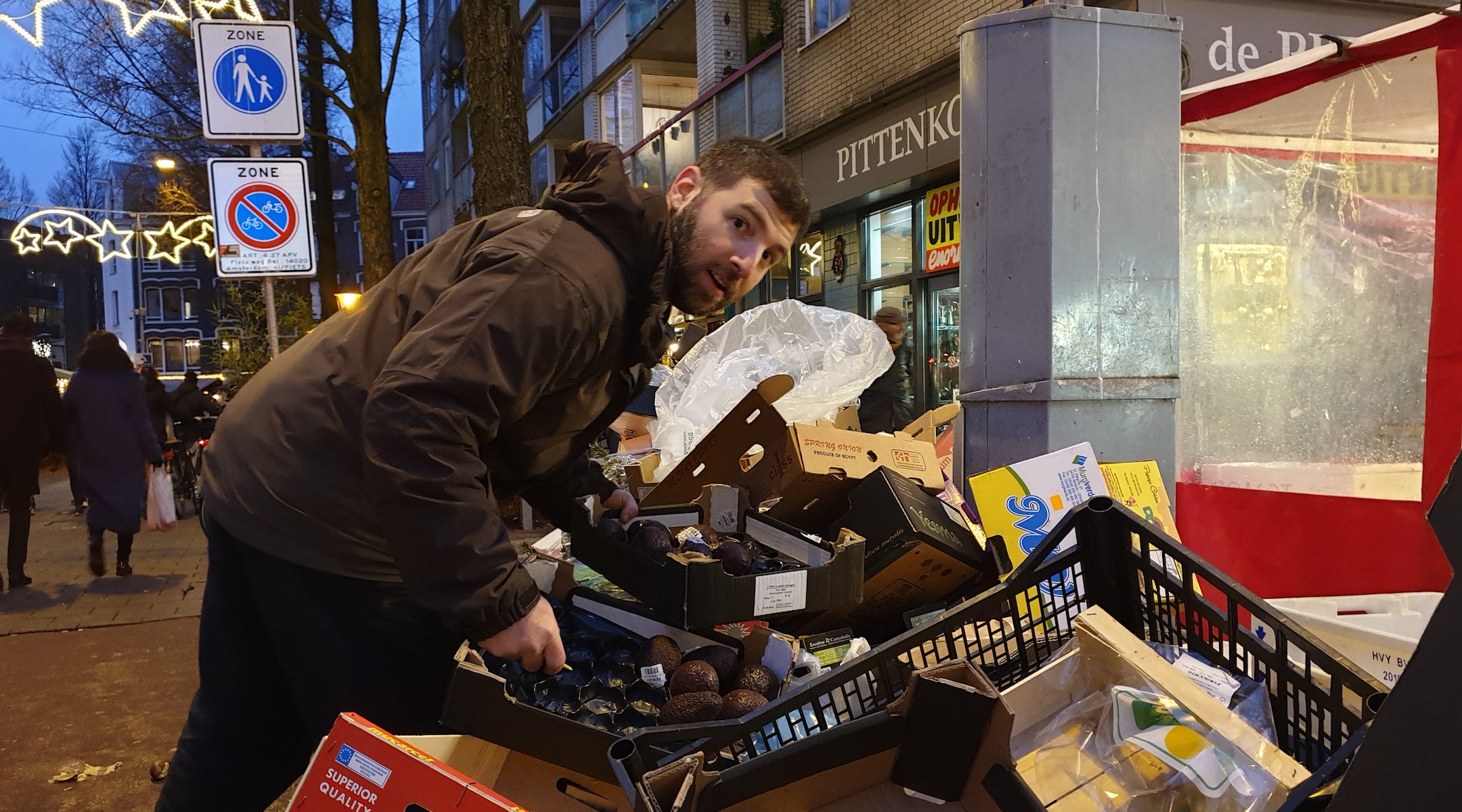 AMSTERDAM (JTA) — I was recently offered a handout while rummaging for food in a heap of trash as my two small children looked on.

It happened all because I wanted to start attending synagogue regularly.

To be clear, I’m writing this neither as a plea for pity nor an indictment against organized religion. I’m actually grateful for how my shul landed me in a heap of garbage.

You see, collecting and eating vegetables and fruit that have been thrown away has made my family’s diet healthier, improved our quality time together and helped us live up to our environmental convictions. On Jan. 20, we will be celebrating Tu b’Shvat, the Jewish holiday celebrating trees, fruits and the environment.

But I’m getting ahead of myself. First let me explain how I ended up joining the community of freegans, or dumpster divers, as we like to be called (though my wife prefers “Garbage Pail Kids”).

It began in the summer, when I decided to start taking my children on weekends to the Chabad shul located near this city’s famed Albert Cuyp Market.

Pushing them along in a buggy at closing time, I saw greengrocers binning full crates of still-fresh luxury items: avocados, mangoes, kiwis and persimmons ($1.50 each). Some were rotten. Mostly, though, there were boxes full of perfectly edible items: mushrooms, asparagus, raspberries and blueberries. There were honey melons and pricey herbs like cilantro, thyme, dill, basil and ginger.

I placed a few items in the buggy’s basket before davening, and a greengrocer gave me the thumbs up.

“It’s all good food,” he said. But by the start of business the following week, he added, it will have developed spots or gone soft, “and then it’d get binned anyway ’cause no one would buy it.”

From one weekly Torah portion to another, I perfected my foraging skills and gear.

I began taking a larger buggy and a fleet of reusable plastic bags. I started wearing boots and other dumpster-worthy attire. I got better at discerning levels of ripeness. And my children learned to be patient while I looked for food. I often held up various finds, explaining which part of the world they come from and what the plant that produces them looks like.

I only realized how this must look two days before Christmas, when a kind Spanish tourist handed me 5 euros. He was clearly shocked by the sight of a seemingly desperate man standing at the height of winter in a pile of trash amid a flock of herons picking at the fish remains, cleaning off produce and announcing it enthusiastically to his infant children.

Then it got slightly awkward.

I explained that I didn’t need his money. He dismissed my protest as pride and implored me to take it “for the children,” adding “There is no shame in receiving help.” 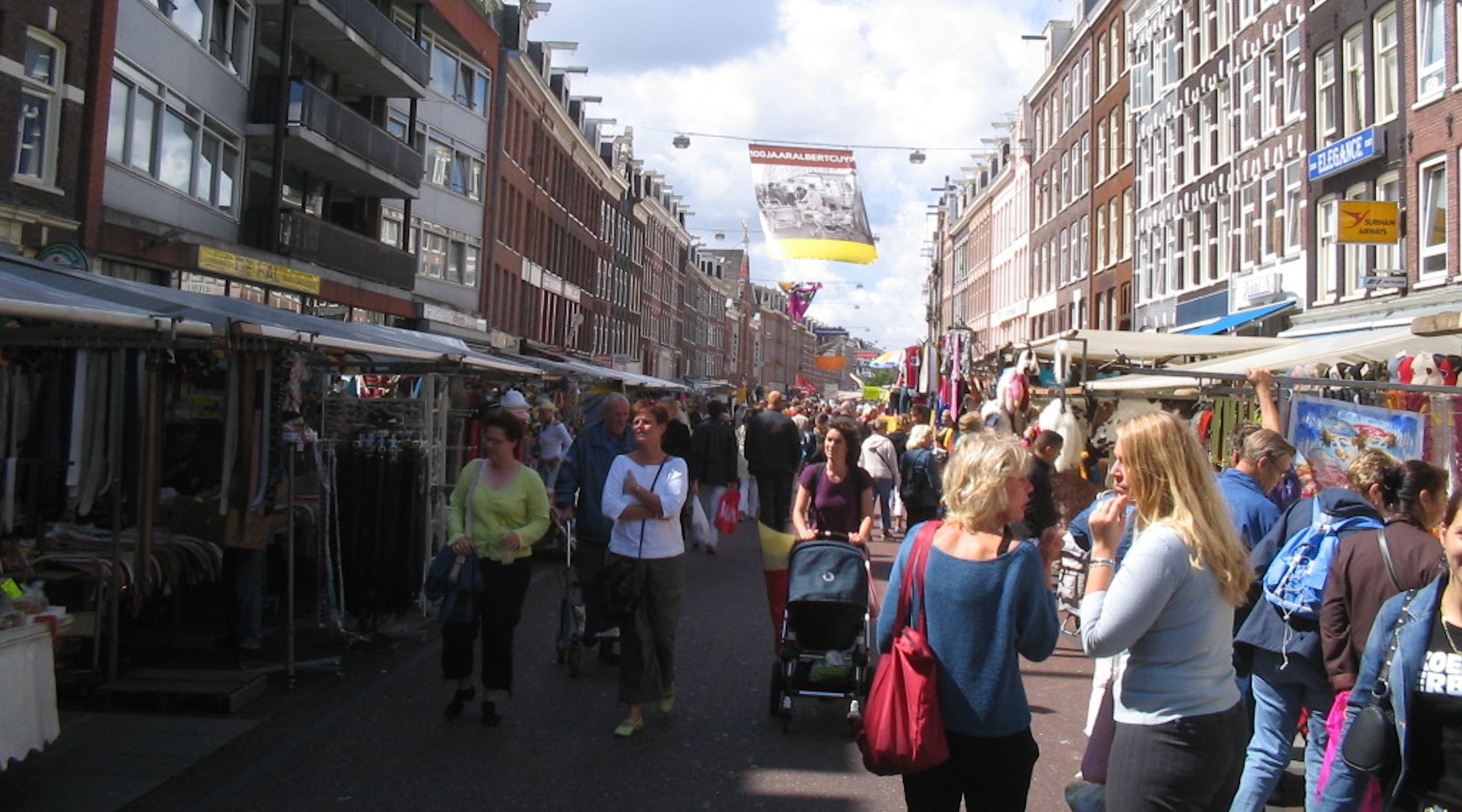 Shoppers take in the Albert Cuyp Market in 2005. (Wikimedia Commons)

That may be true, but there’s shame aplenty in wasting food – at least in Judaism.

The prohibition against doing so – “do not destroy” — appears in the Torah in a verse devoted to the rules of war. Even when laying siege to a city to starve its residents into surrendering, the verse stipulates, “do not destroy its trees by putting an ax to them, because you can eat their fruit.”

That verse in Deuteronomy goes on to juxtapose people and trees in a statement that is often repeated on Tu b’Shvat because many misconstrue it to be an equation. “Do not cut them down. Are the trees people, that you should besiege them?” the text demands.

“Do not destroy” is also the reason that in my native Israel, edible foods and bread especially are often set aside and placed separate from the trash bins. In case no people claim them, they must be given to animals, according to some rabbis, including Pinchas Badosh of the Israeli city of Beit Shean. He ruled recently that leftovers must not even be placed near other types of garbage to improve their chances of being eaten.

For descendants of Holocaust survivors like myself, there’s an added aversion to waste that I learned from my grandmother early in childhood. She described the potato peels that she once encountered in her bowl of soup at Auschwitz, saying she had never tasted anything more delicious. She ate those peels as a young woman weighing 85 pounds, she would say.

Unfortunately, the Jewish state does not quite live up to the Jewish principles on wastage.

In Israel, about 35 percent of food gets binned, resulting in an annual loss of $5.2 billion, according to a 2018 report. Of that, nearly half is thrown away by retailers and consumers.

Beyond the loss of the produce itself, this waste represents gratuitous damage to the environment through the carbon footprint of producing and transporting the food — not to mention fertilizers and the suffering of animals involved in its production.

The loss in Israel is similar to the world average, but it’s significantly higher than in EU countries like the Netherlands, where only 20 percent of food is lost. It’s the result of an ambitious effort in which Dutch supermarket chains are obliged to label and significantly discount soon-to-expire food and transfer unsold produce to a network of food banks.

My wife and I kind of started our own food bank: We cook wholesale over the weekend — small tubs of asparagus soup are a common sight — and distribute the result among anyone willing to take it.

It has brought us closer to people outside our comfortable little circle: less fortunate neighbors who respond to our offers of free food on the neighborhood WhatsApp group and Facebook page.

It has helped us save money (about $150 a month) while simultaneously realizing our goal to reduce meat consumption — another major cause for pollution worldwide. We’ve become quite creative in the kitchen. Our meals now are scrumptious and healthy affairs.

The weekend cooking marathons reduced the amount of time we spend on preparing weekday dinners, affording us more time together. They also brought our family closer because we have dinner every Shabbat now at my father-in-law’s, who lives conveniently near the market.

I even made new friends with fellow scavengers; we exchange tips and loot.

Marianne is a retired Jewish woman who sets aside and sends to Israeli charities whatever money she saves by foraging. Jamal hands out produce at his mosque. And Pieter, well, he’s probably addicted to weed and forages to free up dope money.

Most important perhaps is how foraging is helping me teach my children the value of food and expose them to what many millions of people must do to grow, ship, sell and cook it.

Maybe it’s time to take the educating down a notch on this front, though.

Last week I saw my boy inviting classmates at his posh Jewish kindergarten to join him in the yard and “look for good food.”

Cnaan Liphshiz
Cnaan Liphshiz is based in the Netherlands, where he reports on Jewish life throughout Europe. Born in Israel, he previously worked as foreign news editor for Maariv and as a reporter for Haaretz.
The views and opinions expressed in this article are those of the author and do not necessarily reflect the views of JTA or its parent company, 70 Faces Media.