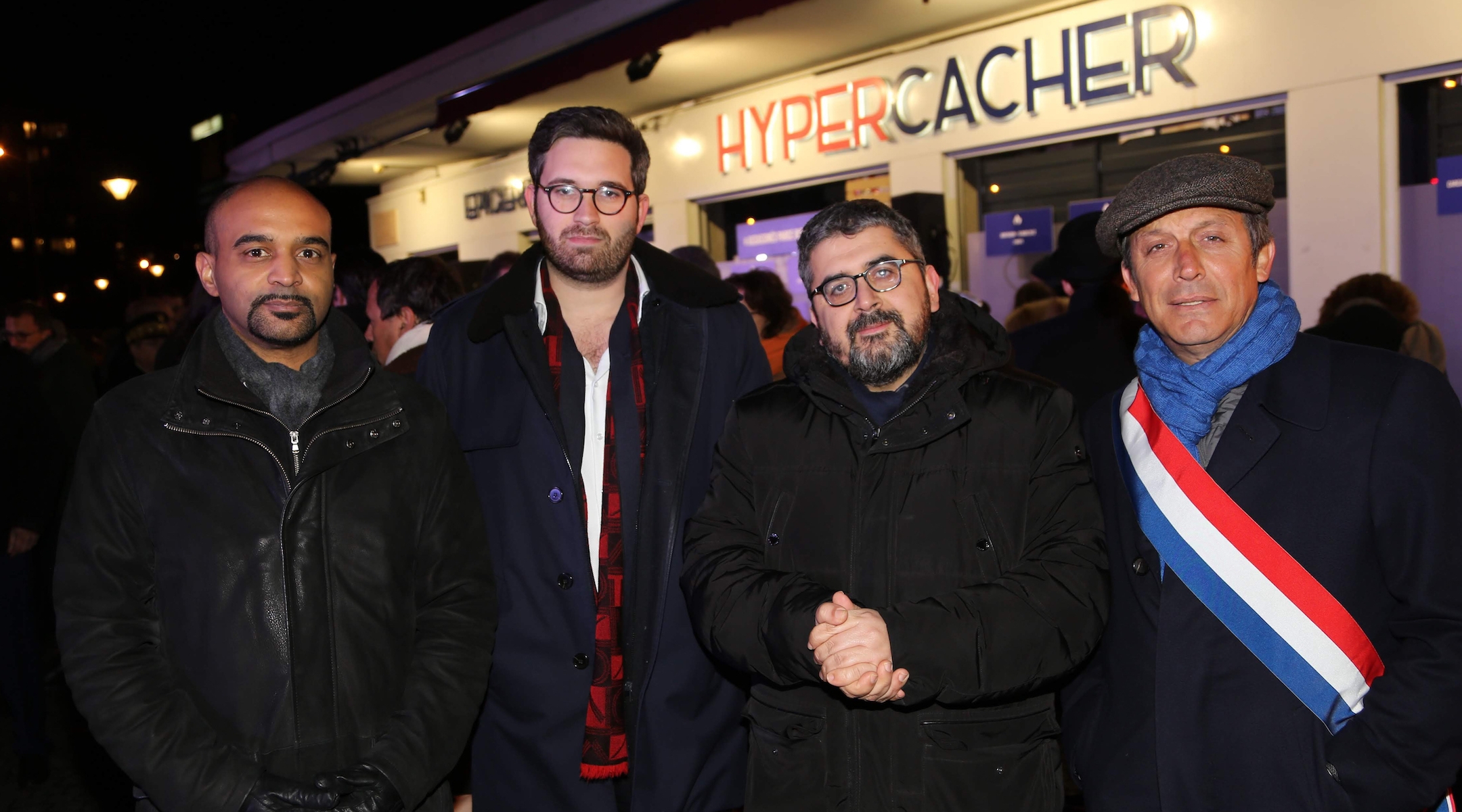 From left to right, Dominique Sopo, Sacha Ghozlan, Mohamed Sifaoui and Sen. David Assouline attend the annual commemoration for the victims of the 2015 jihadist attack at the HyperCacher store in Paris, Jan. 9, 2019. Ghozlan is the president of the Union of Jewish Students of France. (Alain Azria)
Advertisement

PARIS (JTA) — Four years ago, a heartbroken Bernard-Henri Levy found some solace in how more than a million Frenchmen marched through this city to protest extremism.

The Republican March, as it is known, took place on Jan. 11, 2015, amid national mourning after Islamists gunned down 12 people at the Charlie Hebdo satirical magazine and, two days later, four people at a HyperCacher kosher store. The silent protesters held signs reading ”I am Charlie,” “I am police” and “I am Jewish.”

That march was “something we have never seen before in France and perhaps anywhere,” Levy, a Jewish philosopher and celebrated author, said at the time. “It’s a kind of miracle, this national unity, this feeling of fraternity, this willingness by Parisians to go down to the street.”

Four years on, he had hoped it would be a watershed moment for French society, he told JTA on Wednesday.

Change “alas did not come” and the march’s “spirit and promise have been betrayed” by another wave of street protesters, he said: the Yellow Vests movement. What started out in the fall as a series of protests against a hike on fuel prices has been mired since in countless instances of violence against police and a substantial amount of anti-Semitic hate speech.

“Instead of a million people in the street, today we have thousands of homophobes, xenophobes who are anti-republican, anti-journalist and sometimes anti-Semitic. For these demonstrators, it’s as if the bloodbaths never happened,” said Levy, who is scheduled to speak on Feb. 13 at the 92Y Jewish community center in New York about these and other issues.

Anti-Semitic incidents during protests by Yellow Vests — named for the reflective safety vests they wear — have included signs and slogans describing French President Emmanuel Macron as a “whore of the Jews” and their “puppet.”

There have been many cases of protesters performing the quasi-Nazi quenelle salute, which was created by the French comic Dieudonne M’bala M’bala. Dieudonne, a Holocaust denier who has been convicted of hate speech against Jews and others, now delivers his weekly hate sermons online on video platforms while wearing a yellow vest.

These cases, as well as anti-Semitic graffiti and chants, are on the “margins” of the Yellow Vests movement, according to the National Bureau for Vigilance Against Anti-Semitism. But nonetheless they have been a feature of that movement since its inception, the bureau’s founder, Sammy Ghozlan, told JTA.

“According to all the indicators at our disposal, the prevalence of anti-Semitism in French society has only gotten worse since 2015,” said Roger Cukierman, a former president of the CRIF umbrella group of French Jewish communities.

If that’s true, then the Yellow Vests should neither be singled out as responsible for this situation nor as a consequence of it, according to Delphine Horvilleur, a Reform rabbi from Paris.

“There have been anti-Semitic expressions,” she said this week on France Inter radio, “but that doesn’t mean the movement has an anti-Semitism problem.”

Violence against police, meanwhile, seems to have become a hallmark of Yellow Vests protests – even if only a minority of participants engage in it. Hundreds of police officers have been wounded in confrontations with Yellow Vests. Nearly 50 of them were injured on Dec. 1 alone.

Attacks on police are particularly troubling to many French Jews, who for the past 15 years have depended on security forces for the protection of their schools, neighborhoods and synagogues.

But the emergence of anti-Semitism as a characteristic of the protests is more terrifying, Lolita Semama, who lives opposite the HyperCacher market, told JTA at the fourth annual commemoration of the killings there. About 300 people attended Wednesday’s ceremony, most of them Jewish. Candles were lit for the victims of the kosher store attack, as well as others — including the Oct. 27 slaying of 11 Jews at a synagogue in Pittsburgh.

The official part of the ceremony ended with the singing of “La Marseillaise,” the French national anthem. Then, in a move that seemed to feature an air of defiance, rank-and-file participants began signing Israel’s anthem, “Hatikvah.”

“We’re used to anti-Semitism showing itself in discussion and protests about Israel,” Semama said. “But this Yellow Vests business shouldn’t have anything to do with Jews. It shows that anti-Semitism is just below the surface, ready to spill out at any disturbance, to blame the Jews.”

More broadly, Levy said, the protests have exposed the polarization in French society that manifested itself also in the 2017 presidential elections won by Macron. The independent centrist defeated establishment candidates from the Republican and Socialist parties.

A self-professed globalist running on a platform of economic reform – code name for austerity measures – Macron’s popularity galvanized opponents on the far right and the far left. Marine Le Pen of the anti-immigrant National Front party progressed to the second round, winning a record 33.9 percent. Jean-Luc Melenchon. an anti-Israel lawmaker from the far-left Unbowed France, won 19.5 percent in the first round.

It marked the first time in post-World War II French history that roughly half of the electorate or more voted for far-left or far-right candidates. Many French celebrated Macron’s election as a major triumph over extremism.

“But did you think the extremists would give up?” Levy asked. “No, they were plotting their revenge. And the Yellow Vests movement is it. This is why there is such xenophobia, racism and also anti-Semitism in its midst, because it’s a collection of extremists.”

French Jews overwhelmingly voted for Macron in the final round. They credit him with keeping in place and at times beefing up security placed around potential Jewish targets, a policy begun under his Socialist predecessor, Francois Hollande. Macron also is the first French president to declare anti-Zionism a form of anti-Semitism, provoking protests by the far right and the far left.

“The government provides security and encouragement for the Jewish community, but the government and police can only do so much,” said Frank Semama, Lolita’s husband. “They can’t be everywhere. Sadly, our problem is with parts of French society, not its government.”

There is ample evidence of the presence of far-right agitators in the Yellow Vests movement, including the neo-Nazi activist Herve Ryssen, who was spotted at such a rally as early as Nov. 17. Remarkably, they protest shoulder to shoulder with far-left supporters in a movement that can accommodate both because it has no coherent political strategy or platform. Yellow Vests rallies feature calls to reduce taxes, bring down the government and even stage a revolution.

Despite the undeniable prevalence of extremism in its ranks, the movement still has the backing of some centrists, including Marianne Esquit, a middle-aged Catholic supporter of the small Solidarity and Progress party.

“I abhor the violence and racism, but globalization has ravaged the countryside,” Esquit said. “I understand this rejection of the heartless corporate agenda of Macron. It comes from a place of great pain.”

Back at the commemoration for the victims of the HyperCacher murders, Frank Semama points at his kippah and speaks of his pain living as a Jew “in a country and city that has whole areas where I can’t go.”

The bloodbath at the market on Jan. 9, 2015, was a “trauma” that scarred his family, he said: Lolita had left the store that Friday 10 minutes before the killings started.

“Look at this crowd,” he said. “There are 300 Jews here, and that’s it. Sadly, we’re so isolated [in society] that we have come to think of this as normal.”