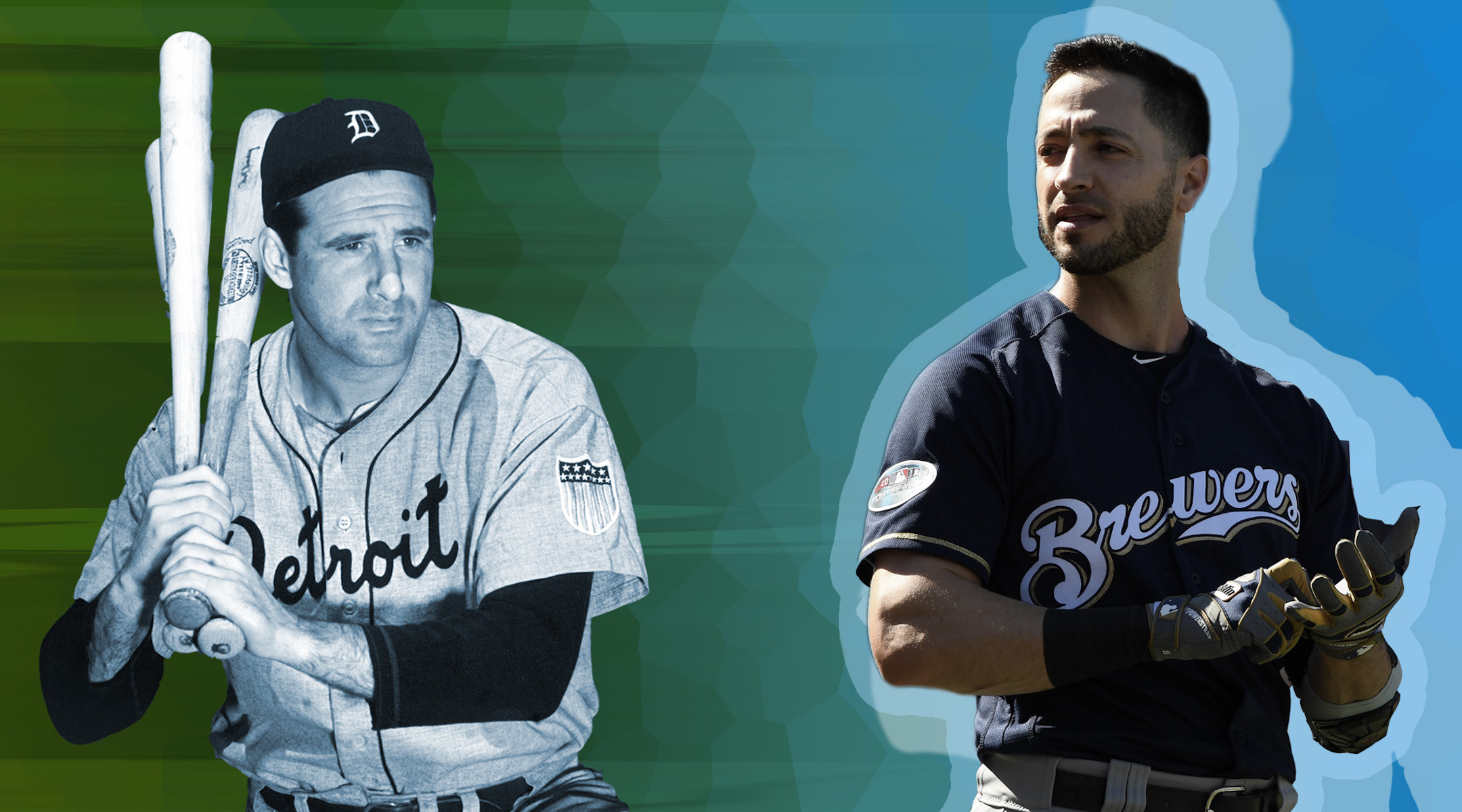 So, Jewish baseball fans, how do you feel about that? Chances are not so good.

Braun has never been a galvanizing force among members of the tribe. No accomplishment — not being named Rookie of the Year in 2007 or being voted the National League’s Most Valuable Player in 2011 — has earned him the sort of reverence reserved for Greenberg, a 1956 Hall of Fame inductee. (Both, however, were nicknamed “The Hebrew Hammer,” with Greenberg also known as “Hammerin’ Hank.”)

And that was before Braun, the son of an Israeli father, was suspended for 65 games in 2013 for using performance-enhancing drugs and lying about it.

Braun ruined his reputation among his fellow players as well after he lobbied for their support by calling the man who collected his drug test urine sample an anti-Semite.

Since then, a number of readers of my website, Jewish Baseball News, have requested a moratorium on Braun news.

“So embarrassed that Braun is Jewish,” one wrote on the site’s Facebook page last year. “He is a total bum.”

By contrast Greenberg, who died in 1986 at 75, earned his celestial reputation by being a true mensch. He embraced Judaism and the Jewish community in ways Braun never has, and became a Jewish sports icon — and important 20th-century Jewish historical figure — in the process.

In 1934, amid rising anti-Semitism as well as a rare Tigers pennant drive, Greenberg sat out a late-season game against the New York Yankees to observe Yom Kippur at a Detroit synagogue (well before Sandy Koufax did the same in the 1965 World Series).

In 1938, the New York native delivered one of the most transcendent seasons in major-league history, hitting 58 home runs, nearly equaling the single-season record then held by the legendary Babe Ruth.

In 1941, at the height of his career — he had just won his second MVP award and led the Tigers to the World Series — Greenberg became one of the first major leaguers to join the Army. When men his age were honorably discharged, he re-enlisted.

“If there’s any last message to be given to the public,” he told The Sporting News at the time, “let it be that I’m going to be a good soldier.”

Greenberg would end up spending nearly four full seasons in the military at the cost of untold statistical achievements and awards. If there’s anyone who should have an asterisk after his career achievements (something fans and writers have suggested for steroid users like Barry Bonds and Roger Clemens), it’s Hank Greenberg — not for his sins but for his sacrifices.

The Bronx-raised player, who finished his career with the Pittsburgh Pirates, fondly spoke about his Jewish identity, too: In his posthumously published autobiography, he famously wrote that “as time went by, I came to feel that if I, as a Jew, hit a home run, I was hitting one against Hitler.”

“I just want to lead my life and set the example of being a good citizen, live by the Ten Commandments,” he also said in a 1980 interview. “If that sets a good example, I think that’s fine.”

On paper, Braun’s stats deserve respect. His rookie season showed unusual promise: The first-round draft pick hit for a .324 average, pounded 34 home runs in just 113 games and led the National League with a .634 slugging percentage. He has gone on to be a six-time All Star, five-time Silver Slugger winner (the best offensive player at a specific position in a given year, as voted by the league’s coaches and managers) and the Brewers’ all-time franchise home run leader.

Of course, asterisks could sit next to any of those achievements, even though he wasn’t suspended until 2013, seven years into his career.

Along the way, the California native was identified as Jewish, and he expressed pride in that — but he was also quick to admit that he was never too connected to that culture.

“I am Jewish. It’s something I’m really proud of,” he told USA Today in 2010. “But I don’t want to make it into something more than what it is. I didn’t have a bar mitzvah … I didn’t celebrate the holidays. It’s a touchy subject because I don’t want to offend anybody, and I don’t want groups claiming me now because I’m having success.”

Of course, Braun and Greenberg’s legacies were shaped as well by the different circumstances under which they played. Greenberg played in an era when Jewish immigrants and their children were looking for a hero to counter anti-Semitism both here and back in Europe. Today’s Jewish fans turn to Jewish ballplayers out of ethnic affection, not any deep emotional or psychological need.

Still, until his steroid-driven backslide, Braun was as prominent a Jewish sports icon as there was, in any professional league. His fall from grace hurt a little more than usual for many Jewish fans.

Jews tend to embrace a star who brings credit to the tribe, but they can be fickle: rejecting a celebrity who either betrays their love or refuses to love them back. Braun did a little bit of both.

Scott Barancik
Scott Barancik is a Florida-based news reporter and the editor of Jewish Baseball News.
The views and opinions expressed in this article are those of the author and do not necessarily reflect the views of JTA or its parent company, 70 Faces Media.