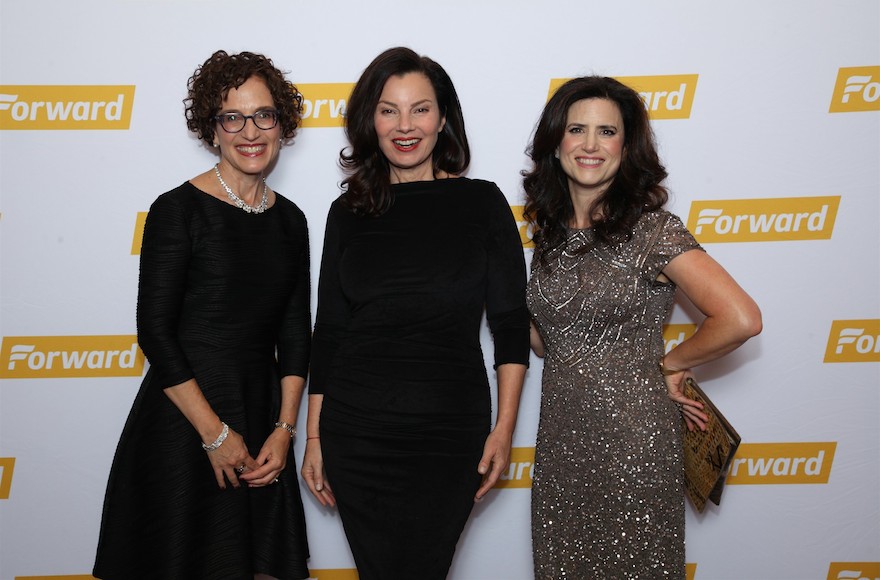 NEW YORK (JTA) — A decade ago, the publisher of the Jewish Daily Forward asked his board to believe in miracles.

“We are supposed to believe in miracles; we are forbidden to rely on them, ” Sam Norich wrote in an email to the board of the Forward Association on Dec. 25, 2008. “That means that miracles only happen if we do our part to help them along.”

And according to the attached minutes of a November 2008 board meeting, the venerable Jewish newspaper could have used a little divine intervention in the thick of the financial crisis. Just five years removed from selling its radio signal for $73 million, the Forward began that September with $63 million in invested assets. By the end of the month, as the stock market plummeted, that number had dropped even further, to $54 million — a $9 million loss within 30 days. A couple months later, the board would discover that it lost $355,000 in Bernard Madoff’s Ponzi scheme.

But Norich had good news: Months earlier, the Forward had appointed a new editor, Jane Eisner. Norich called Eisner, an alumna of the Philadelphia Inquirer, a “phenomenal professional with very high aspirations.” Her appointment, he said, “augurs well for the future of the Forward.”

Ten years later, the picture looks grimmer: On Wednesday, news broke that after 121 years, the Forward would be ceasing its print edition and laying off 10 people — 20 percent of its staff — including Jane Eisner.

“Today was a tough day,” Rachel Fishman Feddersen, the Forward’s publisher since 2016, wrote to the newsroom in an email on Thursday that did not mention Eisner or any of the other laid-off staff by name.

For years, the Forward has been running a loss of about $5 million per year, financial documents show. In 2015, the Forward transferred the vast majority of its assets to a new, separate nonprofit called the Forward Fund, which allowed the publication to protect its assets in case of a debilitating libel suit. The Forward Fund’s records show a 2016 drop in net assets from $44.3 million to $38.5 million. In 2017, the Forward’s annual report shows that it broke even by virtue of $4.9 million in “Funds drawn from investment accounts.”

Neither the Forward Association nor the Fund made its 2017 financial records available to JTA. But Feddersen told JTA that at the end of 2017 the Forward Fund had $37,728,140 in the bank.

(Norich, who was the Forward’s publisher from 1997 to 2016, directed JTA to Feddersen, as did Jacob Morowitz, the chair of the Forward’s board. Mark Mlotek and Ron Sernau, the current and past board treasurers, did not return calls seeking comment.)

“We are making many changes at the company, and that comes with saying goodbye to some treasured colleagues,” Fedderson wrote. “And that hurts.”

The death of the Forward’s print edition, and the slashes to its masthead, cap off decades of financial bleeding at one of the country’s most storied Jewish newspapers. And they usher in an era of uncertainty at a publication that has helped define the American Jewish experience — and hold its institutions accountable — since the beginning of the 20th century.

“The mood was tense and the remaining management didn’t seem to have a clear plan for what happens next,” a staff member who wished to remain anonymous wrote to JTA of the atmosphere in the office Thursday.

Feddersen told JTA that the changes were a necessary pivot toward the way people consume news now, enabling the publication to maintain its reporting standards while staying financially stable. She said that the organization had been losing money since the middle of the last century.

“Running a media business is really expensive,” she told JTA in a phone interview Thursday. “The Forward has been running at a loss since 1945 and it has supported itself by selling off assets… There was always a commitment to a quality of journalism that fulfilled our mission.”

One cost the publication has paid recently is Norich’s retirement package, which cost the Forward a total of nearly $700,000 dollars paid out in three lump sums, according to Norich. Those payments ended in 2017, Feddersen told JTA, and Norich now receives no compensation as a Forward Association board member.

Feddersen and another board member who asked not to be identified said that the organization should now be financially sustainable. Feddersen wrote in an email to JTA that with print costs gone and the staff significantly reduced, there will be “substantial savings” in 2019.

Adam Langer and Helen Chernikoff, the publication’s culture and news editors, respectively, will run the newsroom during the search for a new editor in chief.

Feddersen told JTA that Eisner was let go because the publication needs an editor with more digital experience. But it was not long ago that the Forward was putting Eisner front and center. Last month, Eisner was an honoree at a Forward gala that highlighted “#FearlessWomen in Journalism.”

In 2017, the Forward launched a weekly email newsletter by Eisner called “Jane Looking Forward” that featured her perspective on recent events. In 2016, the Forward hired an external public relations firm to pitch her to other publications as an expert. In 2015 she interviewed then president Barack Obama. 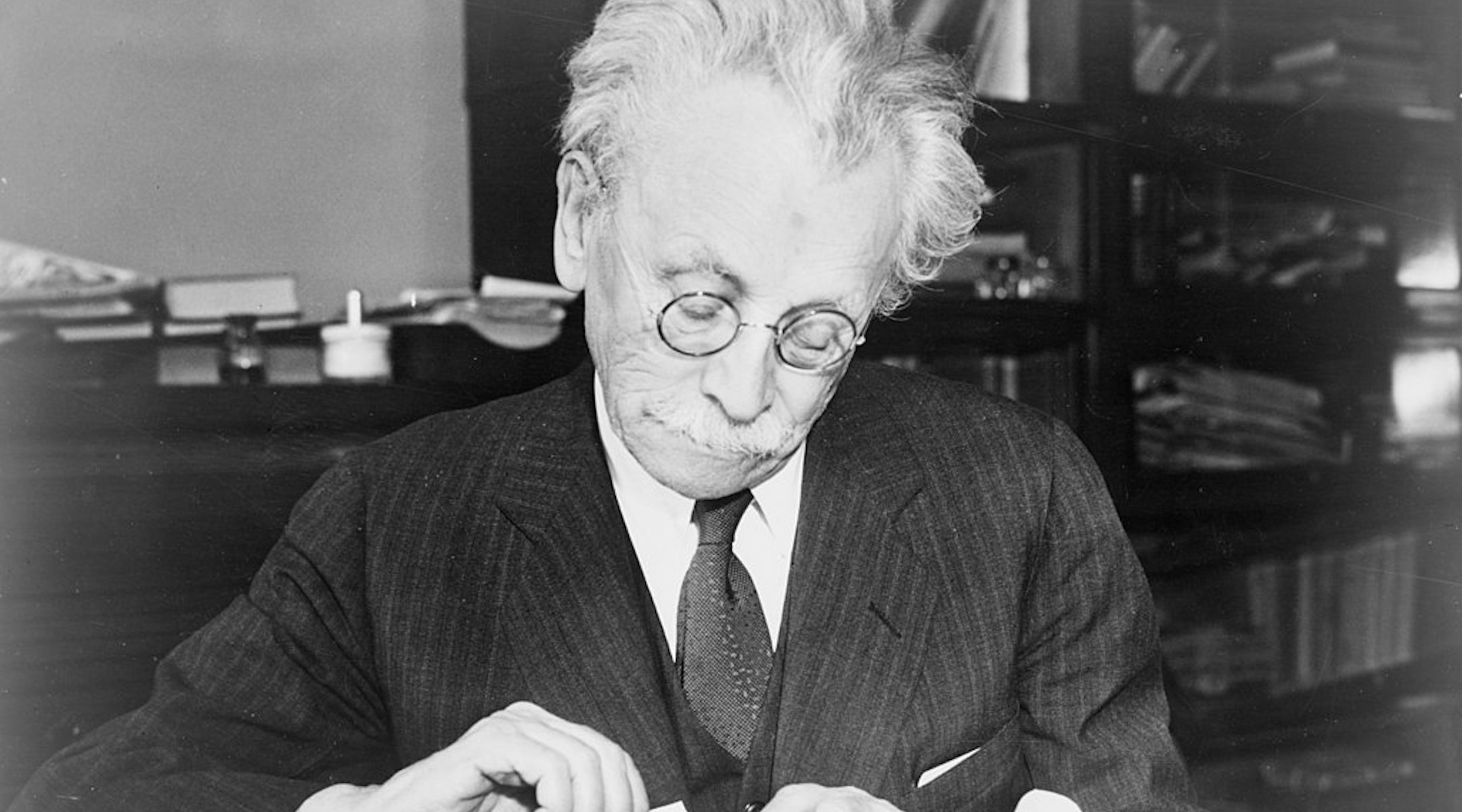 Abraham Cahan, one of the founders of the Forward, in 1936. (Wikimedia Commons)

“We are extremely proud of our association with her and of everything she’s done here,” Feddersen said of Eisner. The Forward Association board member who wished to remain anonymous told JTA  that “there’s such affection for Jane.”

But a former board member, Tom Freudenheim, said that firing Eisner and other senior staff does not track with the goal of maintaining strong reporting.

“I’m an admirer of Jane Eisner and Dan Friedman,” said Freudenheim, a retired museum director, referring to the laid-off executive editor. “I don’t know how you can run a newspaper, whether it’s online or in print, if you don’t have seasoned, senior, professional journalists running it.”

Eisner declined to comment to JTA, pointing to a statement she gave to The New York Times in which she said she had “embraced visionary, fearless and impactful journalism that served our community with distinction.” She added that she has “cherished my time at The Forward.”

While she was still at the Forward, Eisner oversaw the shift away from print. In 2017, the Forward switched from being a weekly newspaper to a monthly magazine with a glossy cover.

The Forward has 2 million monthly visitors online, and had 16,000 print subscribers, according to Feddersen.

“Over the last couple of years this was a preordained process,” the anonymous board member said. “People even a couple years ago knew we’d go from weekly to monthly and probably not have a print publication.”

That move marks a new era for a publication that has had a variety of lives. Under the leadership of Belarusian immigrant Abraham Kahan as a Yiddish daily with socialist leanings who took over in 1897, the Forward became a circulation powerhouse with more than 275,000 subscribers nationally at its peak in the early 1930s. It also owned  a radio station, WEVD. The call letters of the station stood for Eugene V. Debs, the repeat socialist presidential candidate. The Forward headquarters on the Lower East Side were a local landmark.

In 1974, a Chinese-American real estate family bought the Forward Building, and the newspaper moved to Midtown Manhattan, sharing space with the Workmen’s Circle, a Jewish socialist organization.

In 1990, the newspaper launched a weekly edition in English under the leadership of Seth Lipsky, a veteran of The Wall Street Journal. Lipsky put the reinvigorated weekly back on the map, mixing his own neoconservative leanings, knack for hiring young talent and a penchant for scoops with a formidable culture section headed by Jonathan Rosen, the critic and novelist. Forward alumni from that era include Jeffrey Goldberg, the editor in chief of The Atlantic; Philip Gourevitch, a New Yorker staff writer and former editor of The Paris Review; and Lucette Lagnado, a memoirist and reporter for The Wall Street Journal.

Lipsky and the board parted ways in 2000, and his successor was J.J. Goldberg, a veteran Jewish journalist whose politics were more in line with the newspaper’s left-wing roots.

The Forward’s financial prospects looked substantially brighter in 2003, when Disney bought WEVD for a reported $73-plus million; previously, a Spanish broadcasting network had paid the Forward $32.5 million for its coveted spot on the FM dial, according to the New York Daily News. At the time, The Forward Association said “proceeds from the sale would serve as an endowment, ensuring that English, Yiddish and Russian-language editions would carry on regardless of the advertising market.”

In 2010, the Forward and Workmen’s Circle split the proceeds from the 18.5 million sale of their midtown building to a developer who resold it the same day for $20 million.

Enviable revenues from those sales did not, however, ensure the newspaper’s long-term financial health.

“Part of the goal of a responsible board of any organization is to make sure the assets don’t get pissed away, which is what they’re trying to deal with now,” Freudenheim said. “Those assets were used to prop up the print Forward, and we’re living in a different age.”

Ken Doctor, a news industry expert at the Nieman Lab, said the decision to fire the most senior staff suggested a news operation in tough straits.

“Usually it’s among organizations that have hit the panic button,” Doctor said. “When you have such a sudden lurch and you take out the top positions, that tells me this is not well planned. It sends a note of desperation.”

Fedderson said it was responsible for the Forward to act as it did when it did.

“The company was slow to evolve when all the changes hit the media landscape for a bunch of reasons,” Feddersen said in her email. “I was brought on to ensure the Forward continues to survive and thrive, and that includes curbing our expenses. This is by far the most responsible, best move we can make to fulfill our mission.”

The Yiddish edition, which has continued printing alongside the English paper, will also cease printing and maintain its digital presence.

In addition to retaining its left-wing leanings, the Forward has a tradition of investigative reporting on Jewish institutions. In the past year, its reporters uncovered funders of Canary Mission, a shadowy blacklist of pro-Palestinian activists, as well as the history and misdeeds of Stanley Rosenfeld, a Jewish educator who assaulted underage boys for decades at Jewish schools.

In 2017 it reported on former Trump White House aide Sebastian Gorka’s connections to a Hungarian nationalist group with roots in the Nazi era.

“I’m sad because I’ve enjoyed having it but it wasn’t supported by the public,” the board member said of the print edition. “It’s a difficult time for all of us.”

CORRECTIONS: A previous version of this article incorrectly described details of Sam Norich’s retirement package. Norich’s retirement payments totaled approximately $700,000, not nearly $1 million. The previous version also misstated the circumstances of the sale of the Forward building at 33rd Street; half the proceeds from the sale of the building went to the Workmen’s Circle, which co-owned the building. This updated version also corrects the year radio station WEVD was sold to Disney; the correct year is 2003, not 2002. 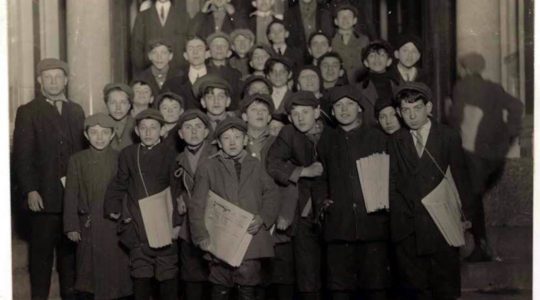