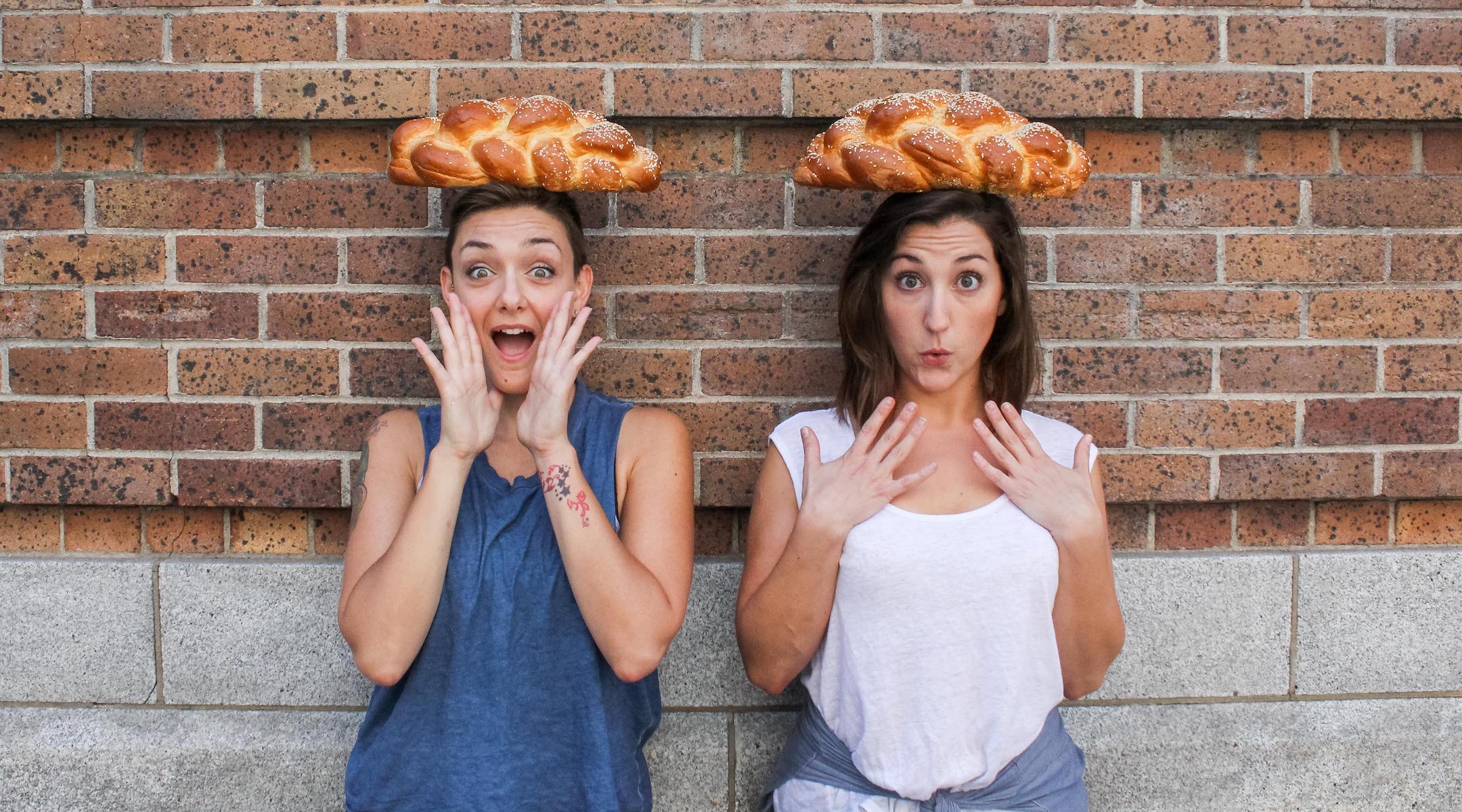 NEW YORK (JTA) — Mandy Silverman remembers being scared of the kitchen as a child.

“There was a constant joke in my house growing up that I would mess up instant iced tea,” she recalled in a phone interview with JTA last month.

But a quick glance at her Instagram feed reveals how things have changed. Her more than 15,000 followers have come to rely on her to post photos of mouthwatering and whimsical challah creations with flavors such as red velvet and marshmallow hot chocolate.

Since starting Mandylicious Challah in 2013, Silverman has seen her enterprise grow both locally — delivering some 50 loaves every week in Sharon, Massachusetts, a Boston suburb — and internationally, dispensing challah-baking advice to people as far away as France, Peru and Thailand.

She spends about two days baking every week and an additional half a day on making deliveries on Friday before Shabbat.

Silverman, 40, is among a growing number of home bakers making a business out of their love of all things challah. Most post their interpretations of the traditional braided Shabbat and holiday loaves on social media, and reach local customers through word of mouth.

Silverman is entirely self-taught. The Orthodox baker started baking challah 11 years ago and started to experiment by decorating loaves with sprinkles and stuffing others with meat. In October 2013, at the urging of her friends, she started selling the challah locally.

A month later, for Thanksgiving, Silverman posted a photo on social media of a turkey-shaped challah with a pumpkin-flavored tummy. The photo was shared widely, leading people from nearby states to drive to Massachusetts to get their hands on one.

“Somehow that picture got very popular, so my business got very recognized,” she said.

Since then, Silverman has been slowly gaining customers.

Silverman sells her loaves for $5 to $18, depending on flavor and size. But she says money isn’t the reason she does it.

“It’s enough that I feel like it’s worth my time, but it’s definitely not the main source of income for my house,” said Silverman, whose husband works in marketing. “The payment is so much more than money. It’s helping people, being a part of their lives.”

RAINBOW STUFFED CHALLAH!!! The how to for this show stopper is on my instastory now!!!! 🌈 🌈 🌈

Though her customers are local, having the Instagram page has allowed her to connect with others around the world who share her passion for challah, such as Lissette Grobman and Lilianne Braun, two Miami women who recently started selling challah in their community. The pair started Hamsa Challah in November and are now selling 150-200 challahs a week with flavors such as zaatar, Nutella and cinnamon. Though their Instagram support is much smaller, with fewer than 200 followers, Braun anticipates that Instagram will be more useful if they decide to expand.

“It would work and could work more at a business level, and the fact that people can actually look into it without knowing you, but in this case most of the people know me,” Braun said.

Kayla Kaye, the founder of The Kitch, is a bit further along than Grobman and Braun. The Oceanside, New York-resident takes orders for some 75-100 loaves every week and delivers to those living in her town as well as West Hempstead and the Five Towns, all on suburban Long Island. Kaye, 36, sells an array of flavors — from a savory barbecue loaf with crispy onions to sweet ones such as pumpkin spice and s’mores.

Though she has amassed more than 3,300 followers on Instagram since founding her company in 2013, Kaye says that she mainly relies on word of mouth. She is at capacity in terms of how many loaves of challah she can bake in her home kitchen.

“If I was really at a point where I was ready to grow my business, have additional help and work in a different facility and make it a larger scale project, I probably would use Instagram more as an advertising vehicle,” said Kaye, who balances her challah business with a part-time job in sales at Madelaine Chocolate, a company owned by her husband’s family.

Though most of her customers are Orthodox, like her, there are plenty of exceptions. Kaye recently had a number of orders from non-Jews who wanted challah bread for Christmas.

“People love challah, especially in New York where there is such diversity as far as culture and religion and food that you can eat from all different parts of the world,” she said.

Most of Sarah Klegman and Elina Tilipman’s customers are non-Orthodox Jews. The Los Angeles-based pair are behind Challah Hub, a hip initiative through which they host host challah-centered events, sell challah-themed merchandise and deliver unique flavors of challah such as matcha tea and bagel-everything spice with turmeric.

Since meeting in 2013, Klegman, 31, and Tilipman, 34, have experimented with different flavors and ways of selling challah, including by hosting pop-up events and delivering loaves in collaboration with the ride-sharing app Uber.

A year ago they partnered with a local bakery, Continental Kosher. Once a month, the shop bakes challahs following Klegman and Tilipman’s recipe that are sold through Challah Hub for $10 to $15.

Okay, don’t freak out, but do you guys know the game, bang, marry, kill? This is a new one: French Toast, Sandwich, Crouton: Salt Challah, Sesame Seed Challah, and Poppy! GO!!!!!!!!!!! @lokal_bakery #challah

Finding the right flavors also took some trial and error.

Klegman recalled a mac-and-cheese challah that sounded delicious in theory but turned out less than stellar.

“I was like ‘How did I ruin two of my favorite things?’” Klegman said. “The cheese kind of absorbed into the challah in a weird way, and it sort of became these squishy noodles.”

Though the pair has more than 12,000 followers on Instagram, the social media backing doesn’t always translate to sales. One time, Klegman recalled, they did a video for BuzzFeed that received over 10 million views but only resulted in 10 new customers.

“One in a million is not really good odds,” Klegman said. “Right now people come to us to see great pictures of challah, they come to us for recipes, they love going to pop-ups and buying from us in person, but our slow burn has been figuring out how to translate those people and our community there to customers.”

The pair charge $10 to $15 for challahs, depending on the flavor, but they, too, say money isn’t what keeps them going.

“The things that get us through the stuff that’s more challenging, or more time consuming, or more of a learning process, are the look on someone’s face when they try a bit of our mint chocolate chip challah for the first time,” Klegman said. “It’s being able to know that all around L.A. there are Shabbat tables with our challah in the center of it.”