Kabbalah finds a home in Judaism between the mystics and Madonna 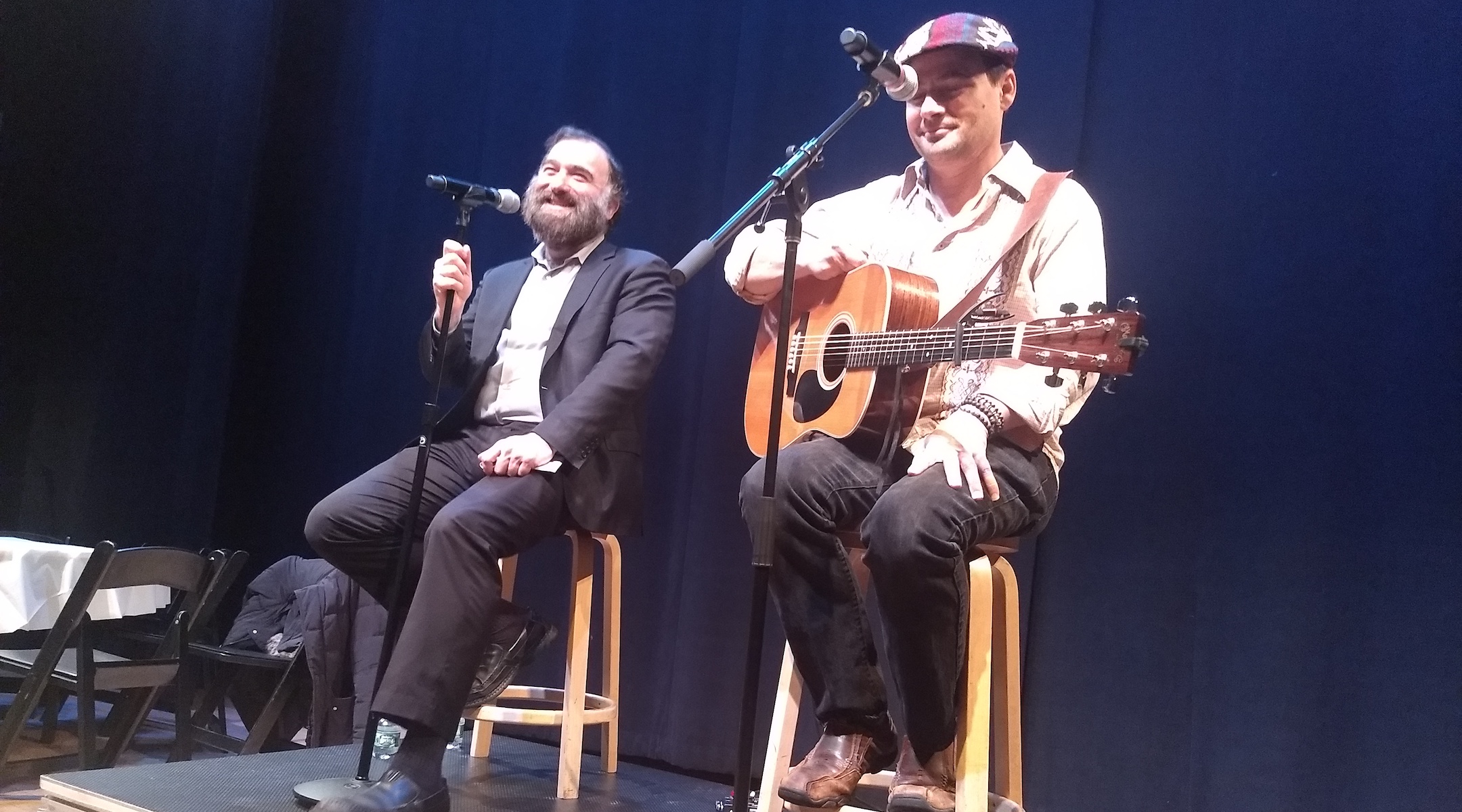 Noah Solomon (right) and Rabbi Naftali Citron sing Hasidic melodies at the closing of a conference on Kabbalah at the Marlene Meyerson JCC in Manhattan on Sunday, January 27. (Ben Sales)
Advertisement

NEW YORK (JTA) — When Jews recite a core hymn welcoming the Sabbath on Friday night, they’re also singing about the holiness of sex.

That was part of the message delivered by Reuven Kimelman, a Jewish studies professor, at a conference Sunday on Kabbalah, the Jewish mystical tradition. Kimelman took the crowd through the words of “L’cha Dodi,” a poetic prayer sung at the opening of Shabbat — and explained its Kabbalistic significance.

The 16th-century prayer, on its face, is about welcoming the Sabbath as a bride. But Kimelman explained that it’s also about rebuilding the holy city of Jerusalem, unifying the masculine and feminine aspects of God above and, implicitly, unifying male and female on Earth.

“The function in Kabbalah is to take two things which have been separated and reunify them,” Kimelman said. “The one flesh is not something new. It’s the restoration of the original unity. So every sexual act is an act of restoring an original unity.”

That kind of mystical interpretation of Judaism, long the province of scholars, Hasidic rabbis, Jewish hippies and some celebrities, is making inroads among a wider audience. A new online class on the Zohar, the core book of Kabbalah, has drawn 350 students. Sunday’s conference on Manhattan’s Upper West Side, now in its 15th year, drew more than 150 people. Romemu, a mystically oriented New York City congregation, just launched a study program for the upcoming summer.

“There’s still an increasing sense of, what about my soul?” said Rabbi Naftali Citron, who organizes the conference, called the Annual Day of Kabbalah and hosted at the Marlene Meyerson Jewish Community Center. “Is Judaism part of the progressive part of the Democratic Party, or is there a part of Judaism that nourishes my inner world? … I think there’s so many Jews of all denominations who are seeking spirituality in every corner.”

Kabbalah describes how God created and operates in the world, and how earthly actions are imbued with holiness. Some of its main concepts include sefirot, or what scholar Daniel Matt calls aspects of the divine personality, and the idea that the male and female aspects of God can be unified through the performance of Jewish commandments, or mitzvahs. For some, it is a poetic commentary on the Torah. For deep mystics, it is a key to understanding no less than the meaning of life.

“God is understood to be the everything, or all of existence, the great breath of all life, the great source of spiritual energy in the universe,” said Eitan Fishbane, a professor at the Jewish Theological Seminary and author of the recent “The Art of Mystical Narrative: A Poetics of the Zohar.” “To the mystic, everything is interconnected and part of the one God.”

For centuries, the study of Kabbalah was restricted to Jewish sages. But the founding figure of Hasidism, an 18th-century Polish rabbi known as the Baal Shem Tov, sought to bring its mystical insights to the masses. Jewish Renewal, a movement founded in the 1970s by Rabbi Zalman Schachter-Shalomi, also employs Kabbalistic concepts.

An esoteric Jewish literature crossed over into pop culture thanks to the The Kabbalah Centre, which teaches the philosophy at 40 branches around the world. It has attracted celebrities like Madonna and Ashton Kutcher, and derision from rabbis and Jewish scholars who think it has separated Kabbalah from its roots in Judaism.

Today, there are multiple translations of the Zohar, the multi-volume work in Aramaic from 13th-century Spain, that limns the mystical meaning of the Torah and other books of the Bible. Its scholars and proponents say its wider popularity waxes and wanes with the popularity of meditation and spiritual practice.

“It’s so popular to do meditation,” said Matt, who recently completed his 18-year translation of the Zohar from Aramaic manuscripts and is teaching the online class on it. “In business and finance, you find meditation groups. So people wonder, does this exist in our tradition? So then you find out there is this tradition, but it’s been too well hidden.”

The crowd at Sunday’s conference was mostly middle-aged, and spanned academics and New Age enthusiasts searching for spiritual enrichment.

People at the conference said they appreciated the spiritual practice offered by Kabbalah. While others may view Jewish mysticism as esoteric, they felt Kabbalah offered a Judaism that felt fulfilling and accessible.

“I did a lot of searching and reading non-Jewish stuff that felt somehow familiar to me,” said Devorah Segall, who attended the session on Jewish meditation. “Then I started learning about the Baal Shem Tov’s teaching and Hasidic learning and I felt like that’s how I could finally relate to being Jewish.”

Rabbi Jeremy Kalmanofsky, the spiritual leader of Ansche Chesed, a large Manhattan Conservative synagogue, said Kabbalah could serve as a gateway into Judaism for people who are uninterested in strict ritual observance on the one hand or social activism on the other. Kalmanofsky taught a session on the Kabbalistic interpretation of the “Sh’ma” prayer on Sunday — but said he treads lightly when teaching Kabbalah at his synagogue because it’s “an acquired taste.”

“I’m happy that for some people, the Jewish themes that they’re all about is a social justice orientation,” Kalmanofsky said. “I’m glad there are some people who are just passionately scrupulous about halacha,” or Jewish law and ritual. “I think that’s great… But there’s also, for those whom it speaks to, a rich language and vocabulary and set of texts about spiritual reflection.”

At another session, Rabbi Esther Azar described how the traditional Jewish morning prayer followed an ABC-CBA structure. She taught with her shoes off, and invited the class to close their eyes as they listened to the folk song “If I Had a Hammer” sung by Peter, Paul and Mary. Some in the room sang along.

Chaya Rivka Zwolinski, who writes and teaches on the Breslov Hasidic tradition, taught the meditation session.

“When you open your mouth and speak to to your Creator, you tell Him what’s in your heart and in your mind,” she said. “What comes out is a sense of peace and deep appreciation. This kind of meditative prayer through speech is something very precious and rare.”

Many of the sessions touched on gender and sexuality. Matt (who was not at the conference) said one of Kabbalah’s greatest innovations is describing God in terms of the shechinah, a feminine form, rather than with strictly masculine language.

“One of the radical contributions of the Kabbalah is insisting that God is equally male and female,” Matt said. “All of Western religion is so dominatingly patriarchal, so to see a medieval Jewish tradition that emphasizes the feminine is very startling and very attractive.”