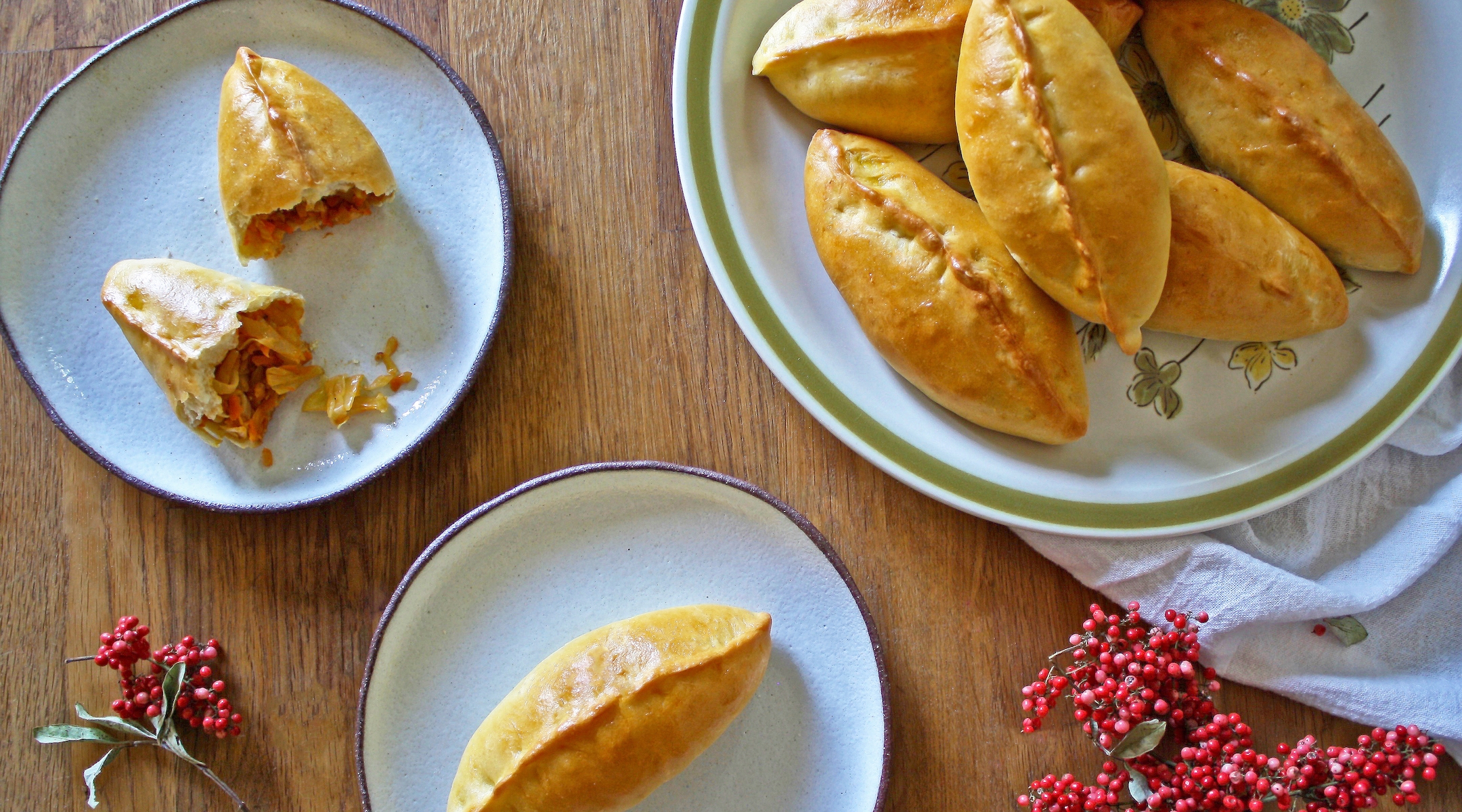 Piroshki are a popular Russian pastry of filled buns that are either baked or fried. Most piroshki are made with a soft yeasted dough that is enriched with egg, but some piroshki are made with a pastry dough of butter/margarine that becomes flaky when baked. The fillings for piroshki can range from savory to sweet, and include meat, vegetables, fruit, and jam. Piroshki typically come in two sizes: meal-size or snack-sized. The larger form is often the size of a sandwich and can be served as a main dish, and the smaller kind is about the size of a Twinkie and is typically served alongside soup.

The word piroshki can confuse non-Russian speakers with its closeness to pierogi, which is Polish for dumplings. You may be familiar with pierogi, traditionally filled with potato or cheese, and in Russia there is a similar type of dumpling called vareniki. Piroshki are definitively not dumplings, but are more akin to a hand-pie or empanada. While filled buns of all kinds exist across cultures, the style of pastry that is piroshki originated in Russia. Their appeal has extended beyond Eastern Europe and into parts of Greece, where they are called piroski, to Iran, where they are called pirashki, to Finland, Central and East Asia, and even to Japan (where they are still called piroshki).

Both my grandmothers are from the former Soviet Union. My grandmother Fanya loved to cook and eat rich foods. She liberally used butter, sugar, salt and oil (and she lived past 90 years old for those concerned). My other grandmother, Mira, loved to eat healthily, opting for olive oil instead of butter, and preferred baking to frying. They were equally talented cooks, and piroshki were something they both made often. Their approaches differed: Fanya used a yeasted dough and she would deep fry the piroshki, and Mira used a pie crust-like dough for her piroshki, which she baked. While the dough and preparation differed, the fillings they made were similar: potato with caramelized onion, simply seasoned ground beef or chicken, or braised cabbage and carrot.

If I’m visiting Brighton Beach, Brooklyn, where there is a high concentration of Russian Jews and Russian food, my favorite piroshki are the giant ones sold from carts on the street that are most definitely fried, are the size of my head and cost around a dollar. If I’m making piroshki at home, then I opt for a yeasted dough and prefer to bake the piroshki instead of deep-frying them. In either case, I love cabbage piroshki best — the vegetable lends itself to the perfect combination of savory, sweet and hearty.

The recipe here is for cabbage piroshki that pay homage to both my grandmothers. The dough has a light airy texture just like Fanya’s, and it gets baked, glossy and browned like Mira’s. I love to serve these with borscht or chicken soup, but they are good all on their own as a comforting, portable snack.

Directions:
1. To make the piroshki dough: Combine the yeast, sugar and warm water (between 90-110 F.). Allow the yeast to activate and become foamy for 5-10 minutes.

2. Add the flour to a large bowl or stand-mixer with the dough hook attachment. Make a well in the center of the flour. In a separate bowl, combine the oil, egg, and salt.

3. Add the yeast mixture and the egg mixture to the well in the flour. Gently combine the wet and dry ingredients. Once the ingredients are just combined, begin to knead the dough. If using a stand-mixer, start mixing on low until the ingredients are combined, then increase the speed to medium. Knead the dough until silky, very soft and smooth, about 8-10 minutes by hand or 5-6 minutes in the mixer. If the dough sticks too much to your hands, add a little more flour 1 tablespoon at a time.

4. Once the dough is kneaded, transfer it to a lightly oiled bowl, cover the bowl with plastic wrap or a lightly damp towel, and allow the dough to rise for 1 hour or until doubled in size. While the dough is rising make your filling.

5. To make the cabbage filling: Using a food processor, grater, or sharp knife, thinly shred the cabbage and carrot. Thinly slice the onion into half moons.

6. Add oil to a large skillet. Over medium heat, add the onion to the pan. Saute the onion for 5-6 minutes, or until softened. Add the shredded carrot and cabbage to the pan and season generously with salt and pepper. Saute for an additional 6-8 minutes, or until cooked and softened and tender.

7. Allow the filling to cool slightly before assembling the piroshki; filling can also be made a day in advance and refrigerated.

8. To assemble the piroshki: Preheat the oven to 350 F. Line 2 baking sheets with parchment.

9. Once the dough has risen, punch it down a few times and divide it into 16 equal-sized balls. On a generously floured surface, form the piroshki by rolling each ball into a thin circle, about 5 inches in diameter. Add 2 tablespoons of the filling into the center of the circle of dough. Fold the dough upwards towards the center, equally on each side, and pinch the piroshki closed along the top. The piroshki will be oval shaped.

10. Place the formed piroshki onto the parchment-lined baking sheets, 8 per sheet with 2 to 3 inches between each pastry. Cover the piroshki with loose plastic wrap or a clean kitchen towel and allow to rise again for 30 minutes.

12. Transfer to a rack to cool slightly, and serve warm or at room temperature. Piroshki can also be reheated easily. They freeze well, too. Serves 16.