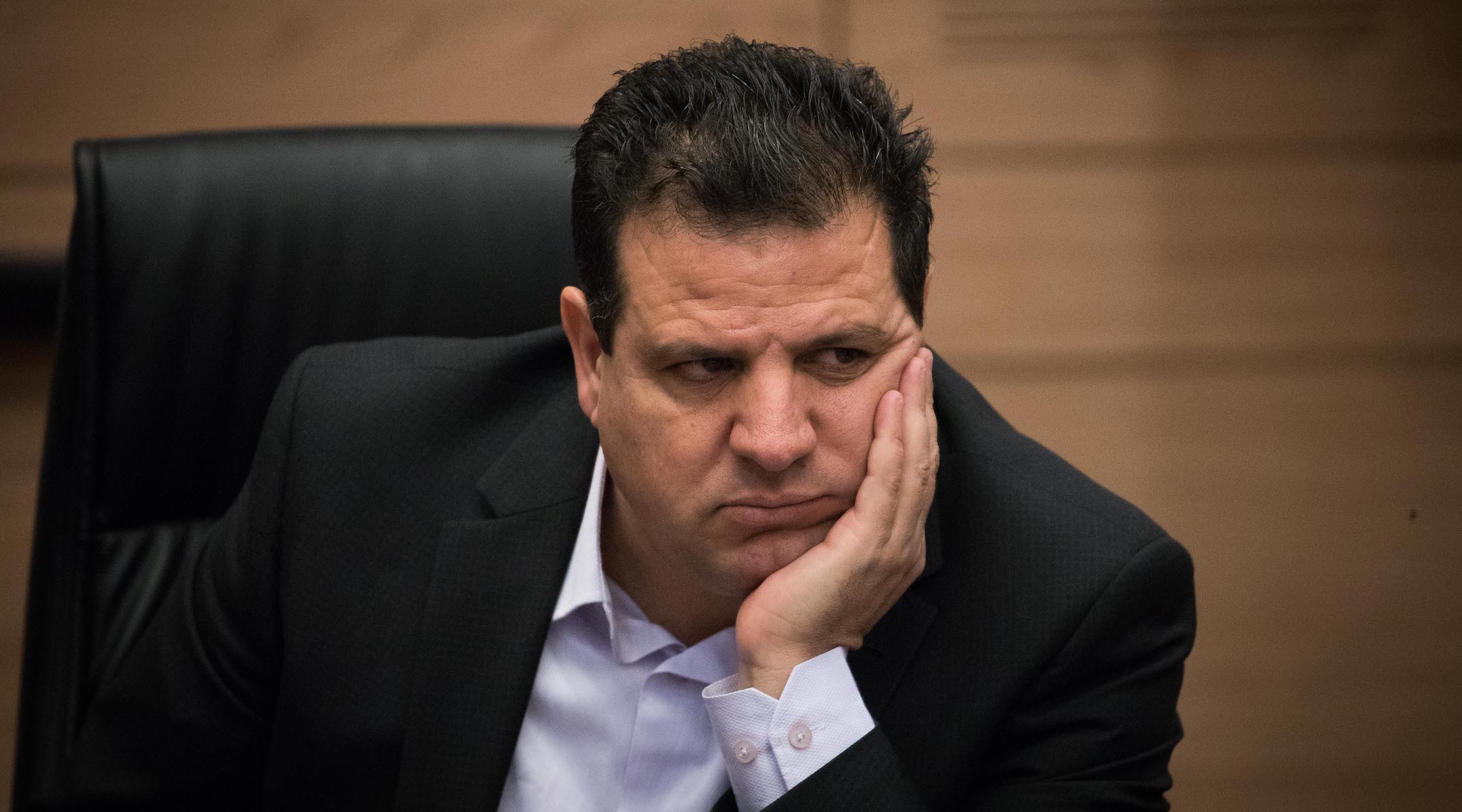 JERUSALEM (JTA) — The big Israeli election news is the forming of new factions: Prime Minister Benjamin Netanyahu brokering a deal with a far-right group inspired by the late extremist Rabbi Meir Kahane, the center-left challengers Benny Gantz and Yair Lapid forming a joint list to break the right wing’s hold on the government.

But one sector of the electorate is facing the opposite trend: The Arab parties in Israel have split into two competing groups. The rupture is raising worries that an already disenfranchised minority will lose what little clout it has in the nation’s parliament.

As the deadline neared this week for submitting electoral lists to the Central Elections Committee, four Arab parties comprising the Joint List fractured. Hadash is now running with the Arab Movement for Renewal, or Taal.  The more religious Raam, or United Arab List, has allied itself with the secular nationalist Balad.

Nearly 1.9 million, or 20 percent, of Israel’s nearly 9 million citizens are Arabs. In the 2015 elections, the newly formed Joint List managed to win 13 seats out of 120 in the Knesset with a boost in Arab voter participation to 64 percent — a significant rise over the 55 percent of Arabs who came to the polls only two years earlier, said Arik Rudnitzky, a researcher at the Israel Democracy Institute.

Netanyahu took note: In the run-up to the vote, he warned that Arabs were “voting in droves,” remarks that were widely condemned as racist.

But like similar splits on both the Jewish right and left, political infighting cleaved the Arab parties. In January, Taal leader Ahmad Tibi announced that he was pulling out his party for an independent run. Rudnitzky said this was primarily caused by Tibi’s belief that Taal deserved more spots on the combined parties’ electoral list, “demanding three of the first 12.” Knesset seats are awarded based on each list’s percentage of the overall vote.

Following Tibi’s defection, the primary question was whether the remaining three parties could maintain a cohesive alliance. At the heart of the crisis was representation: Knesset seats were supposed to rotate among the constituent parties, leading to bitter arguments and internal dissension.

“The right wing wants to see us divided, and our answer should be to run together — against racism, against incitement, against the policy of ‘divide and conquer,’” Odeh told the Jewish Telegraphic Agency during the final days before the party split. 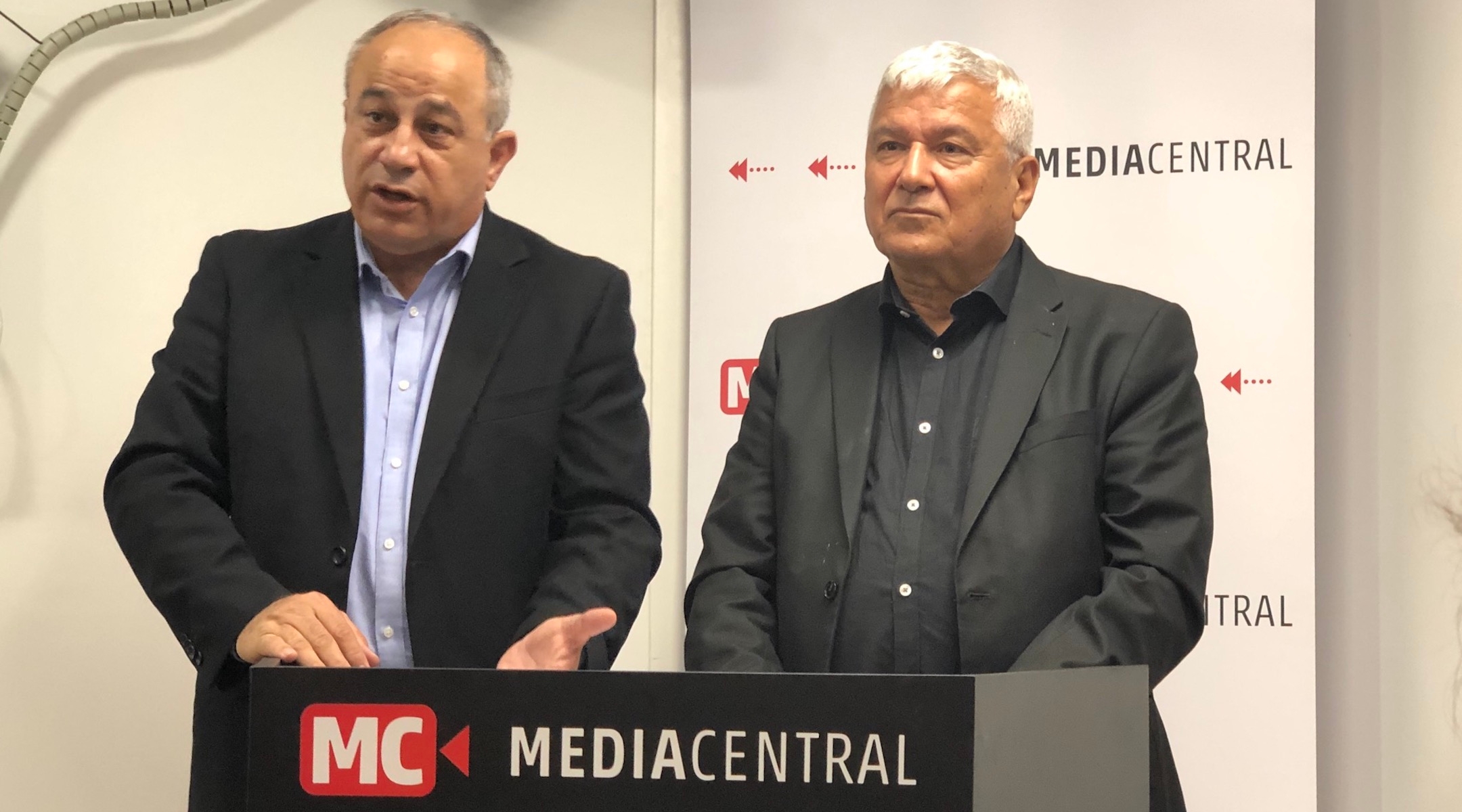 Polling by the Israeli Democracy Institute and others shows that a majority of Israeli Arabs are proud to be citizens, but nearly all feel that they suffer discrimination when it comes to housing, education and economic opportunity. Last year’s law defining Israel as the nation-state of the Jewish people and demoting the status of the Arabic language inflamed tensions among the country’s Muslim, Christian and Druze citizens.

“Our focus and primary interest is the good of the Arab public, a persecuted national minority, especially after the nation-state law and four years of such an inciting, extreme right-wing government,” Odeh said. “In times such as these, especially in light of the splits that now characterize the entire political map, it is important to preserve the Joint List and not lose any single vote — from the Arab public and all the democratic forces we represent.”

Odeh noted that the Joint List was the third largest party in the Knesset after 2015 and attracted a record number of votes.

“The split creates a sense of desperation,” he said. “Our main goal is to topple the right-wing government, and to do so, we must join forces.”

However, Odeh was unable to prevent the split. Instead of one Joint List there are now two smaller alliances.

In a statement sent to the media on Thursday evening, Odeh made the best of Hadash’s alliance with Taal, warning that “while the Kahanist right is united, we must make sure that no voice is lost.”

Former Joint List spokesman Sami Ali said he is worried about the future.

“There is concern that the people who wanted the Joint List to continue will punish the Arab parties by staying home from the polls,” he said, adding that “it’s impossible to know exactly what the ramifications will be.”

Mohammad Darawshe, an expert on Jewish-Arab relations at the Shalom Hartman Institute, said that if the center-left parties court the Arab voters aggressively, they possibly could take enough of a bite from the Arab parties’ support to prevent some of them from reaching the 3.5 percent vote threshold needed to enter the Knesset. That could undermine Arab leverage in a political system that depends on alliances.

Thabet Abu Rass, co-director of the pro-coexistence Abraham Fund Initiatives, said that Netanyahu had already begun dusting off the rhetoric he used in the 2015 election when he charged that rivals Gantz and Lapid were “”relying on Arab parties” who want to “destroy” the State of Israel.

“In Israel, incitement against Arabs has become a ticket for winning an election,” Abu Rass said.

Among Jewish Israelis, meanwhile, there is a widespread negative perception of Arab politicians and voters driven by the Hebrew-language media’s coverage of lawmakers such as Azmi Bishara, who fled the country after being accused of spying for Hezbollah, and the recently retired Hanin Zoabi, who endorsed Iran’s nuclear weapons program and said that “we cannot agree with the notion of a Jewish state.”

“There is a perception among Jews that Arab [members of Knesset] focus more on cross-border issues. That’s not true,” Abu Rass said. “The majority of their time is spent on internal issues, but for the Hebrew press this isn’t the story. It’s about Arabs causing problems for Jews or being primitive [and] killing wives. The papers are not interested” otherwise.

According to polling conducted by the Abraham Fund in January, 29 percent of Israeli Arabs see ending the occupation as a key issue, while 28 percent cited revoking the nation-state law as a priority. Some 61 percent of those surveyed said they would vote for a true Jewish-Arab party that tried to appeal to both sectors if one competed in the election.

However, despite the infighting that split the Joint List, former spokesman Ali said his community will “continue to struggle for our identity and our full citizenship.”

“Israel needs to be a state of all its citizens and not one that prefers one nation to another and passes all sort of racist laws,” he said. “We need to work together in the Knesset on combating the delegitimization of the Arab sector.”