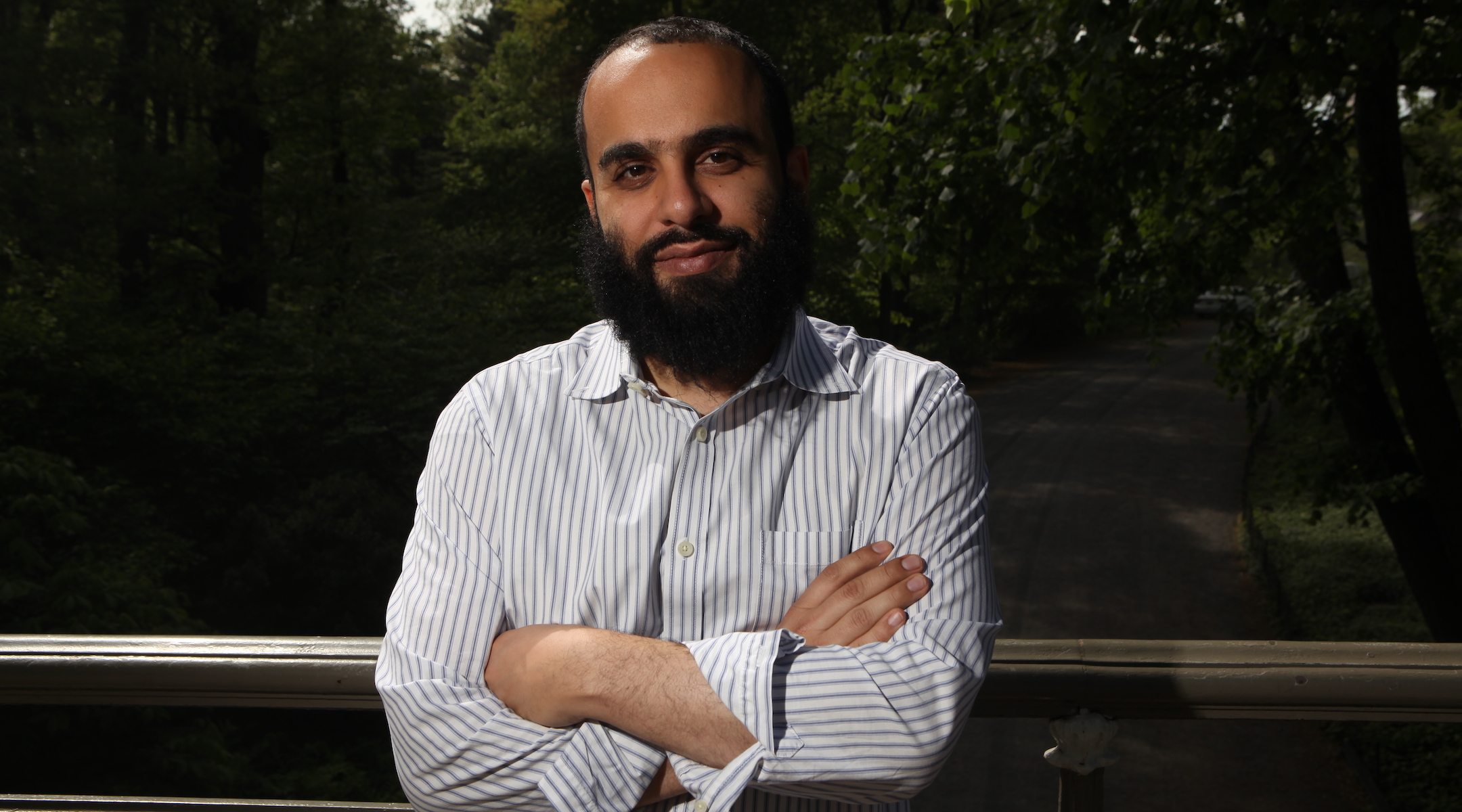 Elad Nehorai, a leader of a politically progressive Orthodox group, got his start by blogging openly about personal issues like addiction and his struggles with religion. (Courtesy of Nehorai)
Advertisement

NEW YORK (JTA) — Since Alexandria Ocasio-Cortez burst onto the national scene, Jewish leaders have talked about her and what she means for Israel and Jewish concerns.

But Elad Nehorai, a 34-year-old former Hasid in Brooklyn, managed to talk to her about Israel and anti-Semitism — through Twitter, of course.

Ocasio-Cortez, the most talked about freshman Democratic members of the House, tweeted glowingly in February about a phone call with British Labour leader Jeremy Corbyn, who has been accused repeatedly of anti-Semitism. Nehorai replied with love — and caution about Corbyn’s history.

“I’m a huge huge fan of yours,” he told Ocasio-Cortez, who represents New York. “I hope you’ll take a look at the amount of Jews trying to call attention to Corbyn’s long, documented history of anti-Semitism. The left’s blind spot in this regard can still be fixed. But we need leaders like yourself to listen.”

Ocasio-Cortez replied that “We cannot + will not move forward without deep fellowship and leadership with the Jewish community.” A month later, Nehorai and the congresswoman spoke on the phone for 45 minutes.

Nehorai ran down a litany of Jewish communal concerns with Corbyn. He didn’t relay much of what Ocasio-Cortez said to him, and he doesn’t know if he convinced her. But he was impressed by the conversation.

“When she was talking about how great Corbyn was, I didn’t see it as a threat,” Nehorai told the Jewish Telegraphic Agency a couple of days after the March 4 phone call. “I could tell that she had angered her own base by reaching out to me. And I was like, ‘That’s what modeling dialogue is about: being able to take crap from your own people.”

That’s a lesson Nehorai has learned from personal experience. He’s an activist with two missions that can sometimes contradict each other: On one hand, he wants to give voice to progressive Orthodox Jews who oppose President Donald Trump. On the other, he wants to connect Jewish artists online and in person, and build positivity in the often toxic cesspool of social media.

Nehorai is the communications director of Torah Trumps Hate, an Orthodox progressive group, and a prolific tweeter as @PopChassid. He’s also the founder of Hevria, a community of Jewish artists whose events — including a recent one featuring a sword swallower — are mostly by invitation only.

Nehorai himself doesn’t hold back from criticizing the president on Twitter, where he has nearly 13,000 followers. Amid the latest debate over Rep. Ilhan Omar and anti-Semitism, Nehorai lambasted Trump’s criticism of the Democratic response to the controversy.

“I cannot even describe how sickening it is to see this man use our people like this,” Nehorai wrote. “That he holds us and wields us like a weapon is so utterly dehumanizing. It is a form of hate. It is anti-Semitism.”

Critics of Nehorai say his critiques ends up abetting age-old anti-Semitic canards. In response to a Nehorai piece in the Forward titled “White nationalism is spreading in the Orthodox community,” Rabbi Yaakov Menken wrote that Nehorai’s article promoted the idea that the Orthodox do not care about others.

“To many, Nehorai’s article merely confirmed what they already ‘knew,’” wrote Menken, spokesman for the Coalition for Jewish Values, a staunchly right-wing Orthodox rabbinic group. “How often do we hear that Orthodox Jews care only about themselves, and don’t even accept the Jewish status of other Jews?”

Tensions with the Orthodox world have only amped up since Trump’s presidential campaign and election. Nehorai’s organization, Torah Trumps Hate, convenes Orthodox Jews for demonstrations and other actions, and serves as a forum for those who dislike the community’s rightward turn.

“We’re talking about really vulnerable populations being put at risk,” he said. “I was kind of shocked seeing how many Jews were only worried about Israel. The whole reason I started speaking out was that we have to start modeling a Judaism that doesn’t just care about our own.”

Nehorai has never felt like he fit in. In college at Arizona State University, he turned to pot and poker as a way of both making money and dealing with his then-undiagnosed bipolar disorder. Police once searched his apartment for drugs, and he dodged a felony only because they couldn’t find the stash hidden in his desk drawer. He later had a manic episode and ended up in a mental hospital for 10 days.

He joined the Chabad Hasidic movement, became Orthodox and studied for a year in Israel. But after getting married and moving to Chabad’s home base of Crown Heights, he began to chafe.

Nehorai had been blogging for years at PopChassid.com, first by writing about pop culture through a Jewish lens with posts like “The Office: Michael Scott is the man.” But he made a name for himself by writing openly about his personal struggles with addiction, religion, and how and whether he loves his wife. As his blog picked up, he started to feel like the free expression he prized didn’t fit in with the haredi Orthodox way of life.

“Being very honest doesn’t really work in a place where conformity is more important than honesty,” he said. “People who think out of the box or aren’t conformists have a really hard time in the Orthodox world.”

In 2014, he founded Hevria, a community and blogging forum for creative Jews, along with a companion site for anonymous writing called Neshamas (Hebrew for “souls”). The site featured contentious accounts, like ones describing abuse and discomfort when women visit the mikvah, or ritual bath.

“We’re talking about things that people don’t want us to talk about,” he said. “I started getting a lot of hate for it and people telling me we should shut the site down. … There’s a person who’s talking about the pain they’re in, and it really matters that we listen to them.”

That work was part of the reason he ended up leaving Chabad and joining a Modern Orthodox synagogue. Now he looks more like a Brooklyn hipster than a Hasid: He met me at a Starbucks wearing a yellow flannel, jeans, faded brown shoes and a bushy beard.

Both in person and online, Nehorai doesn’t come off as abrasive. He says he hopes, primarily, to seek out better ways of communicating and connecting. He’s gone viral a few times for positive-minded projects, like “20 photos that change the Holocaust narrative,” which depicts Holocaust victims and survivors in empowering contexts.

And his work with Hevria, which is supported by Clal: The Jewish Center for Learning and Leadership, involves events like “creative farbrengens” — a kind of Jewish open-mic night that takes its name from a traditional Hasidic gathering for Torah study and storytelling. Events have featured anything from a vaudevillian magician to a bagpiper.

He also has used Twitter to help people in real life. This month he reached out on behalf of Nylah Burton, a Jewish writer living in Colorado who tweeted that her next-door neighbor was on a racist rant. Burton, who is black, no longer felt safe in her apartment, but also didn’t have the money to move and break her lease. Nehorai saw Burton’s tweet, texted her, set up a GoFundMe page on her behalf and raised thousands of dollars within a couple of days.

Nor is his work all online. Nehorai begins each day by boarding the New York City subway, post-rush hour, taking out his laptop and writing for an hour or two. He’ll ride the train like that until he loses inspiration — sometimes going through Brooklyn, traversing the length of Manhattan and ending up in the Bronx.

After that he goes back on social media, where his work goes on.

“We live in a world that sees these discussions as zero-sum,” Nehorai wrote on Twitter following his phone call with Ocasio-Cortez. “Where we win or lose. Where openness to engagement is a danger, not an opportunity … There is no way but the hard way.”