Get to know the new 16-year-old star of ‘Dear Evan Hansen,’ who founded a theater company for his bar mitzvah project 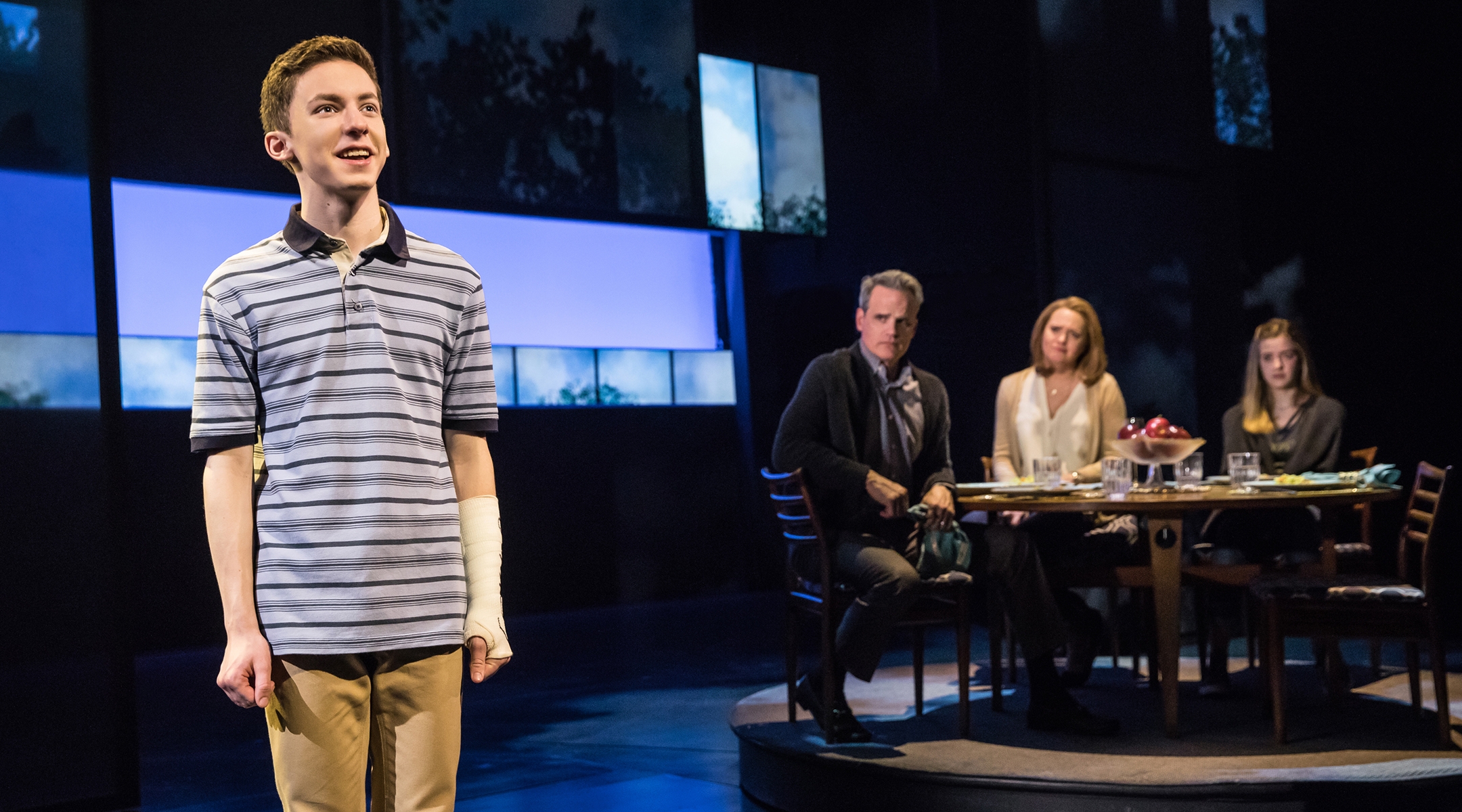 “It was just kind of a right place, right time situation,” Feldman told the Jewish Telegraphic Agency. “There were all these people [from ‘Dear Evan Hansen’] that saw me perform and win the Jimmy Awards, so they emailed me to come in and audition, and I did, and the rest was history.” (Watch his winning performance here.)

Ben Platt, the Jewish actor who originated the role as Evan, an anxiety-stricken teenager who gets caught up in a lie after a classmate’s death, won the Tony Award for best actor in a musical in 2017. At 23, Platt was the youngest winner in the award’s history. His performance won him many other accolades, and since he left the show in 2017, there have been three other Evans: Noah Galvin, 24; Taylor Trensch, 29; and now Feldman, the only actor to be the same age as the character.

Feldman is from Woodmere, one of Long Island’s iconic Five Towns. Now in his sixth week of performances as Evan, Feldman spoke with JTA about  his Broadway debut, his bar mitzvah project and why he wants a “Smash” reboot.

JTA: Once you landed the role as Evan, did you get to chat with Ben Platt? Did he give you any advice about the show?

Feldman: Ben was actually one of the first people to reach out. He was so lovely and so welcoming. We didn’t even talk about the show all that much as we did end up hanging out. We just sort of got to know each other.

Last night marked the one year anniversary of my last performance as Evan Hansen and my first time meeting this exceedingly kind young fellow who I hear is going places. About as full circle as it gets. pic.twitter.com/9o5eOvzsmE

The role of Evan is a really dark and challenging role, and a heartbreaking story. Are there ways you’re trying to keep yourself healthy and practice self-care?

I’ll admit it, it’s not easy to sort of turn on and off that part of my brain. At this point — at the time of this interview — I’m in my sixth week of doing the show, and I think I’ve really found a route to keeping myself healthy on a day-to-day basis, as well as being able to turn on that part of my brain when I’m doing the show. The key to that is just surrounding myself with — and talking to — people that love me and care about me and that know me outside of Evan, and have known me before Evan.

I can imagine it must be so difficult. I read that at your first performance as Evan, 500 friends and family came to watch you.

I don’t think like anything that will ever happen in my life will possibly match that. They were just so energetic, and we’ve had some really great audiences since then, but I don’t think anything will ever match, for me anyway, the energy in that room of that night.

What are your parents’ feelings on you in the role?

My mom has been really, really a part of this process. Tonight’s actually the first time she’s not seeing the show.

Oh my gosh, she’s seen it for six weeks?

Every single night. And now she’s coming more like three times a week. She just gets really such a high off of it. I’ve done so much community theater throughout my life, and I think [there’s] maybe two performances she’s ever missed me doing. So this is a weird thing for her, to deliberately not come to the show. But she’s learning. I could not possibly do any of this without her. She has managed every aspect of the planning, and all the ins and outs that I, as a 16-year-old, could not possibly do all by myself. My whole family has just been really happy and excited. 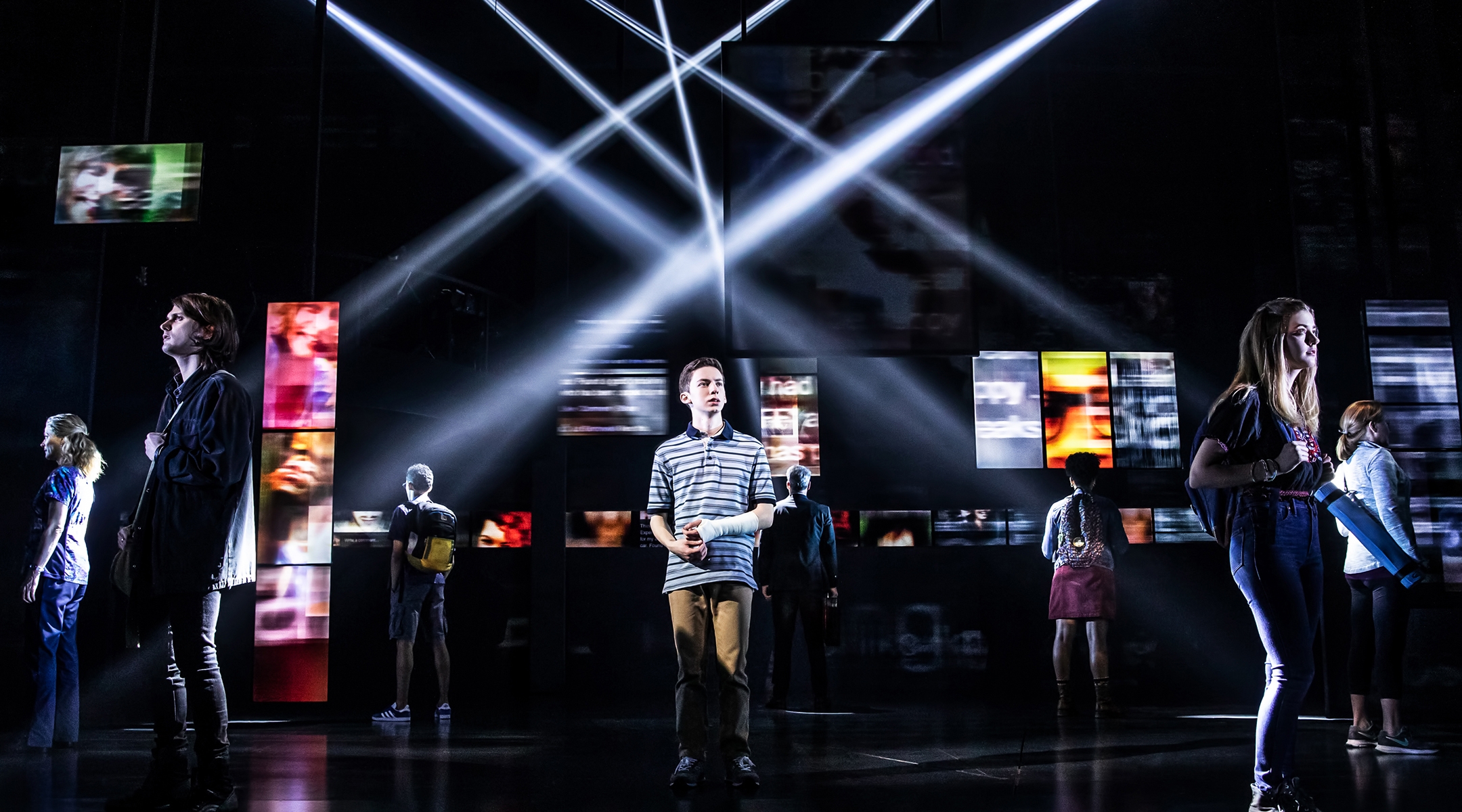 Before Feldman took over the lead role in “Dear Evan Hansen,” Ben Platt won a Tony for his performance. (Matthew Murphy)

I saw in a Playbill interview that you founded a theater company for your bar mitzvah project. Can you tell me a little more about this?

Yeah, the whole theater company sort of happened by accident.

I had been trying to stage musicals from a very, very young age, always unsuccessfully. So I wanted to do something that would raise money for charity, but also do something I was good at, which was theater. So with like 12 of my closest, most talented friends, we staged a cabaret. I was 12 years old! And we raised money for what is now NEXT for Autism, a charity that raises money to help all aspects of life for people living with autism.

We did pretty much five seasons of shows. It started with just little cabarets, but sooner we started doing full-fledged, fully staged musicals and gained a bit of a following. And that’s something I’m really really so proud of, that my friends and I were able to build that from the ground up out of nothing. It was really really special, and we’re definitely not done — we’ll be back!

Can you just tell me — and I’m so sorry if I mispronounce the name of it — Zneefrock Productions?

Zneefrock, yeah. Most people cannot figure that out.

The cast of Star Wars at our first read-through! #GotAGoodFeelingAboutThis

A post shared by Zneefrock Productions (@zneefrockproductions) on Apr 9, 2016 at 1:59pm PDT

Shot in the dark! Can you just tell me about that name and how you thought of it?

[Laughs] There used to be this restaurant in New York City called Mars 2112, and it was themed to act like you were dining on Mars. I’m a big fan of theming, and themed restaurants, so [my family] used to go pretty often. The food was terrible! But it was really, really fun.

There were these walk-around alien characters that we didn’t know the names of. They had names — now I know some of the names – but at the time my family and I just made them up. So one of them was Zneefrock, and I sort of took on the mantle as Zneefrock, and my sister was Smudgekee, which was the name of one of the other aliens. Which, if you could figure out how to spell that …

I was just about to ask you —

Judaism has always sort of been a big part of my life, especially growing up on Long Island, it’s very much a community in my neighborhood. It’s not – there isn’t the Jewish kid. Everybody’s Jewish. So it sort of builds something to bond over, and it builds a collective thing from a very young age, and that’s really cool. We’re Reform Jews, but we’ve gone to temple, we go temple, and we’re very much Jews by tradition. It’s always something to look forward to, to celebrate the holidays and see your family, so it’s been a part of my life, just as it is for any other kid on Long Island. But it builds that community, and that’s something that I really cherish.

You talked about wanting to stage musicals when you were very young. Were you always a theater kid?

I’ve been a theater kid for pretty much as long as you can be a theater kid. I started doing theater when I was 8, but I saw my first Broadway show when I was 3 years old. It was “Beauty and the Beast,” and I fell in love. And as soon as I found out you could do theater – I didn’t realize it was a thing you could go into a place and do! — but as soon as I found out you could, I just ran there.

And the ultimate theater kid TV show is “Smash.” I love that you’re campaigning to bring it back. Do you think it will work?

I’m so glad everyone’s talking about me campaigning to bring back “Smash.” Genuinely. The more word of mouth there is, the better. I hope there’s something in the works to bring it back in some way. Cause, you know, I’m going to keep pushing until it does, is really the answer. I’m glad that I’m in a position now to sort of just talk about something enough that more people will [listen].

That’s sort of like the goal for me, on social media, like how “Brooklyn Nine-Nine” was saved: To use my platform to do useless things that we all really want, and are really not very important for the world, but are important for me personally [laughs] and I’m sure important for many other theater kids. So I’m going to keep pushing until something happens.

So, four years later, looking back upon you as a 12-year-old founding a theater production company for your bar mitzvah project and now you’re making your Broadway debut, could you ever have predicted this?

Broadway has always been the dream for me. That’s been my goal — to just work hard enough until I got there. And did I imagine I would be doing this at 16? Absolutely not. But it’s really such a gift to be able to do that now, and I’m still pinching myself every day, and I don’t think it’s going to stop. So if I could tell 12-year-old me that this was happening now, he probably would’ve worried a lot less. I’m very very lucky to be here. And I hope 12-year-old me knows that.