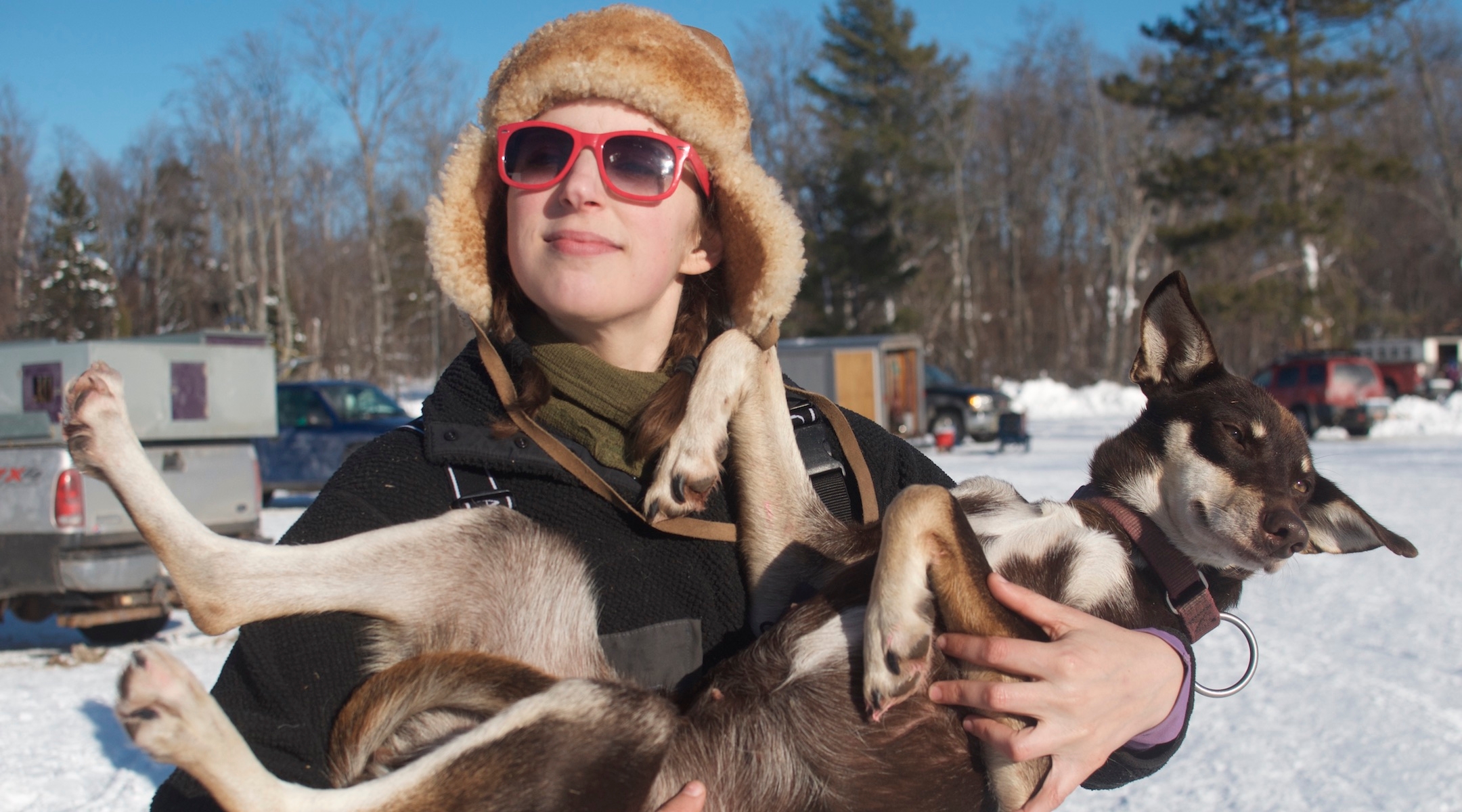 Blair Braverman, 30, says all her sled dogs are Jewish -- with the exception of one. (Christina Bodznic)
Advertisement

Editor’s Note: After this story appeared, the Jewish Telegraphic Agency learned that another Jewish woman, Susan Cantor, finished the Iditarod sled dog race in 1992. You can read a profile of Cantor here.

(JTA) — Writer and adventurer Blair Braverman appears to be the first Jewish woman to race in — and complete — the historic Iditarod sled dog race, finishing the grueling 1,000-mile course in 13 days, 19 hours, 17 minutes and 2 seconds.

The 30-year-old musher crossed the finish line Sunday in Nome, Alaska, in 36th place. Her sled was pulled by 14 dogs.

“WE DID IT!!!!!!” she tweeted Sunday. “It was the hardest thing I’ve ever done. And also the most beautiful. The dogs and I took care of each other the whole way. Stories to come, but for now we plan to nap (and eat) for days. All dogs and humans are doing great.”

It was the hardest thing I’ve ever done. And also the most beautiful. The dogs and I took care of each other the whole way. Stories to come, but for now we plan to nap (and eat) for days. All dogs and humans are doing great. xoxo pic.twitter.com/r30l9k9H7x

Braverman told Alma last year that the Iditarod is “something I’ve been dreaming about since I was a kid.” She grew up in Davis, California, and now lives in northern Wisconsin with her husband, Quince Mountain. They run BraverMountain Mushing (a portmanteau of their names).

On Twitter, where she has a dedicated following of over 70,000 people, Braverman tweets long-form stories. She shares her life raising dogs, racing and being the only Jew in her rural Wisconsin community. She’s become somewhat of an internet sensation: Her fans call themselves the “Ugly Dogs” following a Twitter troll that told Blair to “Go back to your ugly dogs, Karen.”

In an NPR profile of Braverman, she explained that she believes her Twitter popularity is due to the inaccessible nature of the rural sport.

Logging off for Yom Kippur. Shana Tovah, and wishing an easy fast to all my (fasting) Jews out there! pic.twitter.com/NzgtCmPwBu

She also reminds her followers time and again that all her sled dogs are Jewish (with the exception of one). As she told Alma, “they are proud Jewish sled dogs.” She also tweets about feeling “like a Jewish grandmother” when she watches her dogs eat.

“My dogs are my family,” she wrote in Vogue. “I love them like pets, but we also have a different, deeper connection that comes from relying on each other in the wilderness. That bond with my dogs — the love we share and the things we can do together — is the whole point of all of this.”

Braverman graduated from Colby College and received her master’s degree in nonfiction writing from the University of Iowa. In 2016, she published her memoir, “Welcome to the Goddamn Ice Cube: Chasing Fear and Finding Home in the Great White North,” about navigating the arctic as a woman. She also writes an advice column for Outside magazine called “Tough Love,” and has contributed to Vogue, BuzzFeed, Smithsonian and others.

“I’ve lived in places where I’m the only Jew, particularly in rural Norway. And it’s dangerous, I think, for people to think they’ve never met certain kinds of people. Like if you think you don’t know any queer folks, or immigrants, or Jews — that’s how groups of individual humans are reduced to symbols and ideas. If I know someone, if I’ve lived with them, I don’t want them to be able to tell themselves that they’ve never met a Jew,” Braverman told Alma.

Braverman joins a small group of Jews to have completed the Iditarod, now in its 47th year. In 2009, the Forward reported that 11 Jews have raced in the competition’s history; JTA could not independently verify that statistic. 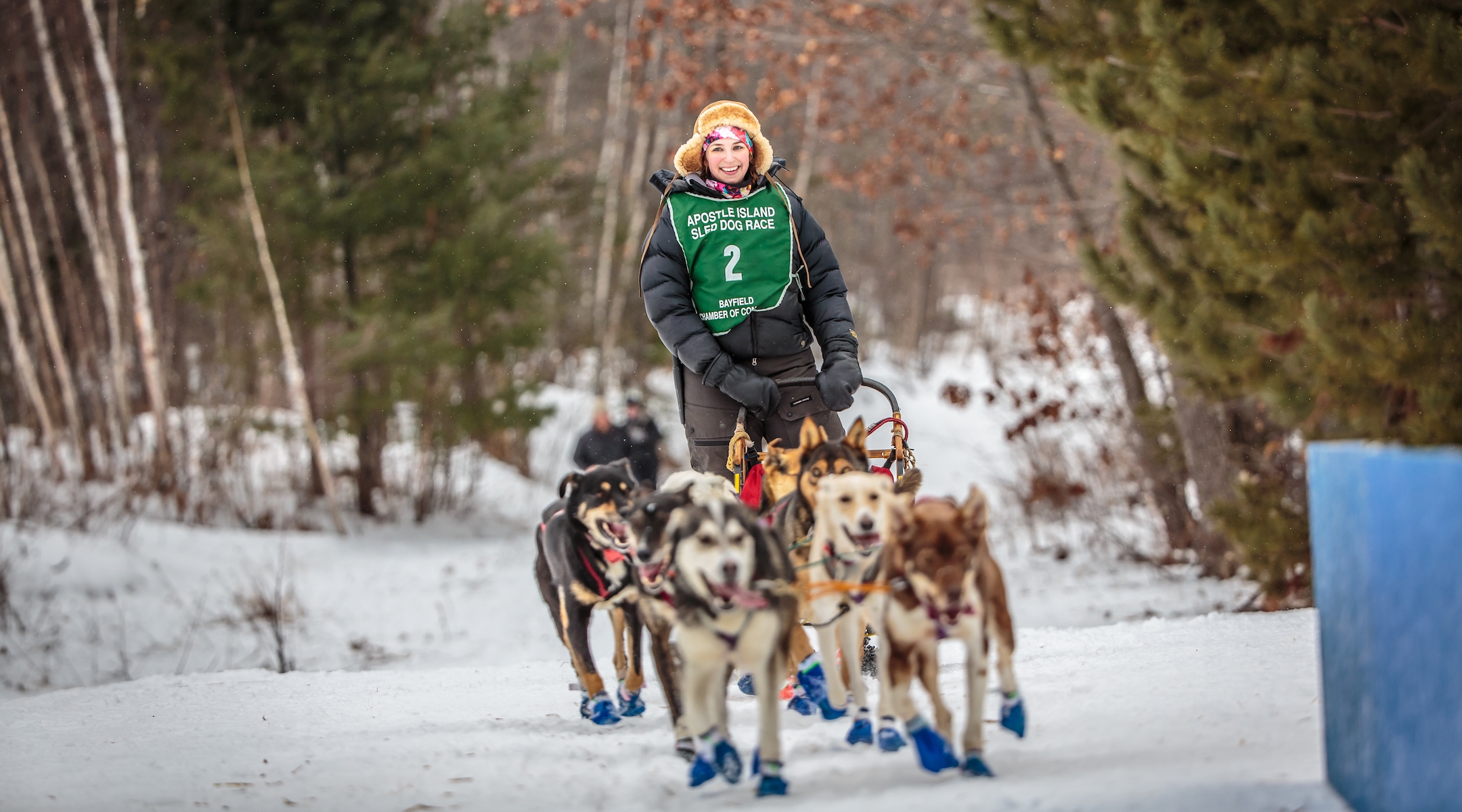 The first Jewish musher to complete the race was Fred Agree, who raced in 1984 and 1985. His lead dog was named God and his wheel dogs — the ones in the back — were named Sodom and Gomorrah because, as his wife, Nona Safra, wrote in an email to JTA, “you should never look back.”

The 2011 Iditarod champion, John Baker, is of Jewish and Native Alaskan heritage. He is the only Inupiaq — and only Jew — to ever win the Iditarod. Baker competed in the Iditarod 22 times. His Jewish grandmother, Clara Levy, was born in 1914 in Kiana, Alaska. In 2002, Rabbi Mark Glickman traveled to Kotzebue, Alaska, for her funeral and wrote a moving account of her life and her family.

Jake Berkowitz is a three-time Iditarod finisher (in 2008, 2009 and 2013); he now covers the race for the Anchorage Daily News. Born in St. Paul, Minnesota, the Forward reported that he attended Talmud Torah of St. Paul Jewish day school and studied at Hebrew University for a year after graduating high school.

Braverman’s fans have been vocal in their support for her throughout the race. They also started a campaign to support Alaskan schools as she races (naming the campaign “Igivearod”). As of this writing they have raised over $80,000 for Alaskan teachers and schools, funding over 100 projects.

Braverman had no idea that her fans were going to take on the fundraising project.

After finishing the race, she tweeted, “A few hundred miles into the race, teachers started hugging me in villages. ‘We haven’t been able to buy new glue sticks in six months, but now my classroom will have a garden and a project to get girls into engineering!’ one woman told me. I happy cried all the way up the Yukon.”