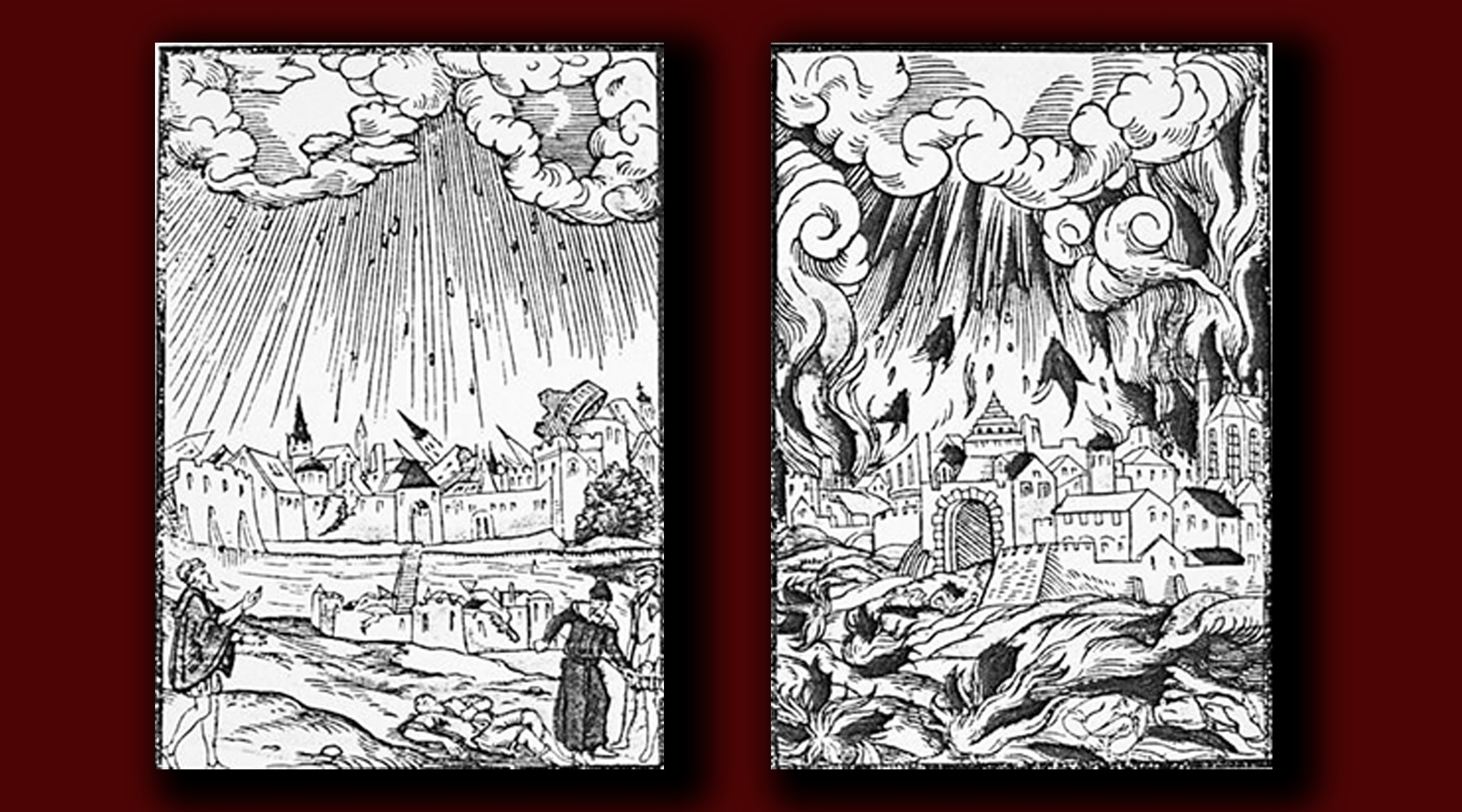 Images from a German broadsheet describing the Ferrara Earthquate of 1570. (Wikimedia Commons)
Advertisement

NEW YORK (JTA) – Azariah de’ Rossi was an entirely unremarkable Italian Jew in his late 50s when the earth shook beneath his feet in the great Ferrara earthquake of November 1570.

Narrowly escaping the collapse of his home that Shabbat night, he and his family sought refuge with other survivors, Jews and Christians alike, in open fields and even aboard boats on the Po River. His encounter with Christian scholars in the aftermath of the earthquake convinced him to write a religious book, inspired by the earthquake, that described the majesty of the God’s universe.

The resultant 700-page magnum opus, titled “The Light of the Eyes,” caused an intellectually seismic event whose aftershocks would reverberate for the next 500 years: Without realizing it, Azariah de’ Rossi had essentially created Modern Orthodoxy.

According to my colleague at Touro College Rabbi Dr. Zev Eleff, who literally wrote the book on Modern Orthodoxy, it is “a movement that inspires a life that is halakhically legitimate, inspired by the promise of Religious Zionism and animated by the best of modern wisdom and culture.” (Halacha is Jewish religious law.) It would take a few centuries to flourish into a full-fledged movement (especially the religious Zionism part), but de’ Rossi’s approach to Judaism was pretty radical for the 1500s. For example, de’ Rossi was broadly inclusive of all wisdoms, regardless of their source. Elements of this orientation are evident in isolated works of Jewish physicians such as Maimonides, but de’ Rossi was much more radical, consulting controversial Jewish thinkers like Philo and Christian sources like Augustine.

A child of the burgeoning rationalist humanism of the 16th century, he saw the nondenominational advancement of human wisdom as a garden of intellectual delights, open to visitors of all persuasions and welcoming whatever beneficial seeds might be planted there. Many would toil in that garden over the next five centuries, but Azariah de’ Rossi was arguably the first to seed the landscape.

De’ Rossi was certainly not the first Jew to express pious literary gratitude to God after near-death experience – we’ve been doing that since Moses and Miriam stood and watched the Egyptian forces drown in the sea. What set him apart from his predecessors, however, was the unique infusion of the spirit of the Italian Renaissance into his work. The opening (and best) chapter of his book, titled “The Voice of God,” was a religious-scientific exploration of the nature and purpose of earthquakes. He surveyed the extant knowledge of the phenomenon from a wide variety of non-Jewish sources, folding it into detailed discussions of biblical passages and rabbinic in a sometimes disjointed and lumpy whole.

In his innocence, de’ Rossi did not realize that using the tools of contemporary scholarship from non-Jewish sources might represent a threat to traditional Jewish thought. His enthusiastic, almost breathless embrace of contemporary science and the assumption that it could not possibly undermine religious ideology drew the ire of rabbis throughout Europe. He was roundly attacked, for example when he noted how his wife recovered from a salt deficiency, and opined that Elisha the prophet may have used the same strategy to heal a biblical leper. He was forced to apologize for this argument, which suggested that miraculous cures might have this-worldly explanations.

For de’ Rossi, the identification of a mundane reason for a supernatural event was merely “bringing nature into the sphere of the miraculous.” The reconciliation of science and Torah, and the recognition of all that is valuable in modern thought and culture in harmony with traditional Judaism, is precisely the root mission of the Modern Orthodox movement.

De’ Rossi’s irrepressible intellectual curiosity led him into a wide variety of disciplines – and into even more hot water. While he staunchly defended the inviolate nature of the text of the Torah, he did not refrain from addressing the apparent contradictions between the Talmud and 16th-century science. He personally maintained steadfast faith in the dictates of Jewish theology and practice, but he recognized the sages of the Talmud as human beings, of necessity limited by the state of knowledge in their times. “We ought not to flatter them against their will,” he asserted, “by stating with our lips what we do not believe in our hearts.”

The backlash was immediate and forceful. Italian rabbis issued a ban on his book (although not on de’ Rossi personally, however, because he was well known to be scrupulously observant). The ban, which forbade any Jew to possess even a part of “The Light of the Eyes” without written rabbinic permission, was maintained well into the 17th century. The prolific Rabbi Yaakov Emden suggested that perhaps the Hebrew title Me’or Einayim should be rendered Me’aver Einayim, or “Blinding the Eyes.” However, he held back from banning the book.

The debates initiated by de’ Rossi continue to rage in communities from Teaneck to Lakewood, from Bnei Brak to Efrat. On the one hand, Orthodox Jews are subject to what sociologist Samuel Heilman has described as the “sliding to the right,” increasingly seeking to disassociate with contemporary culture, thought  and technology. At the same time, writers like Rabbi Nathan Slifkin ignite de’ Rossi-sized controversies over scientific questions such as the ascent of humanity.

The aftershocks occasioned by the publication of “The Light of the Eyes” continue to register on the Richter scale even today.