In Israel, haredi Jews tend to vote in blocs — unless they’re ‘Anglo’ immigrants 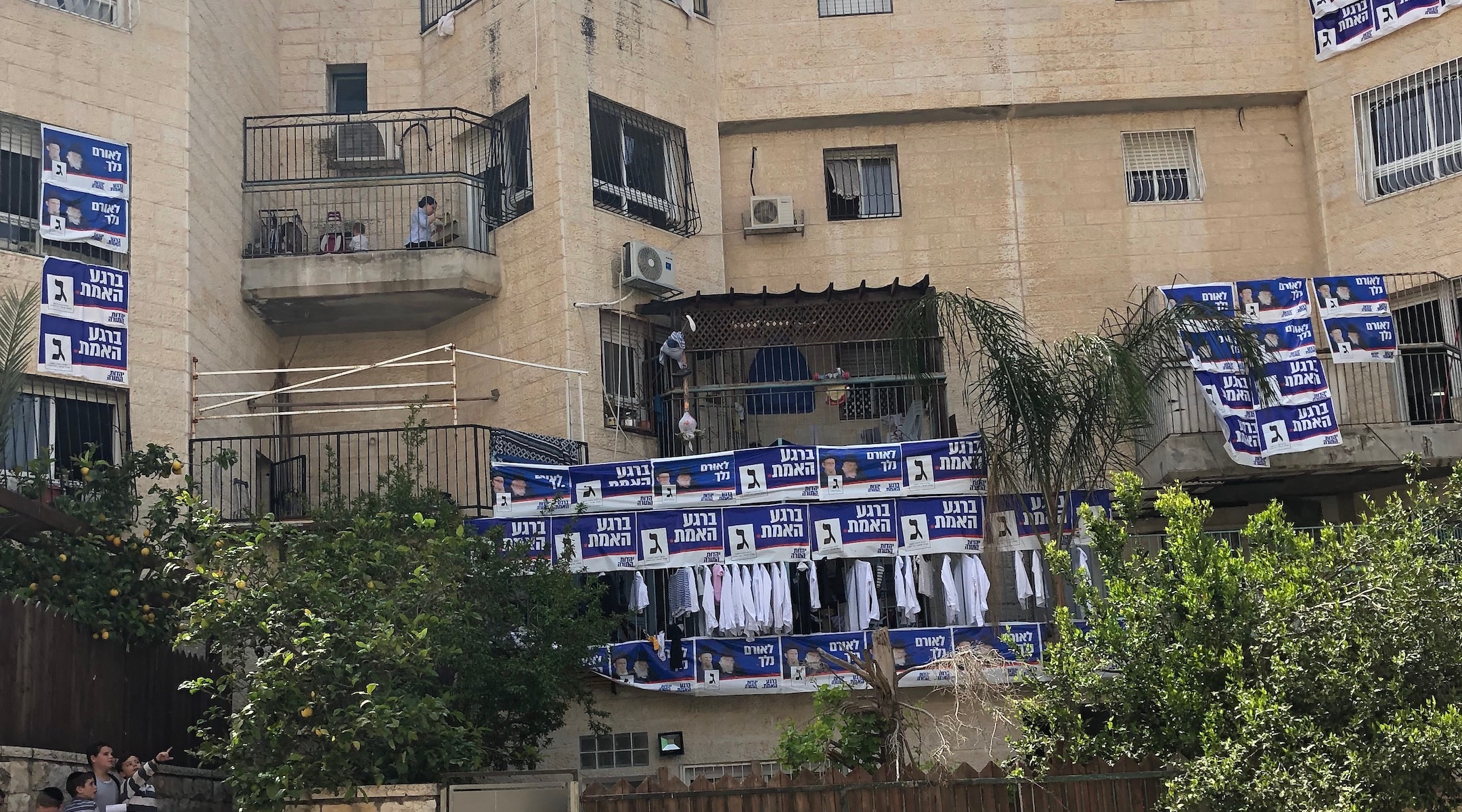 A house in the Israeli city of Beit Shemesh is covered in posters for the United Torah Judaism party, also known as Gimmel. (Sam Sokol)
Advertisement

Billed as a “historical gathering” to discuss how the vote would “heavily influence and even determine the religious nature of Israeli society,” the event featured prominent rabbis warning of dire threats to freedom of religion in the Jewish state should Gimmel fail to secure adequate representation in parliament.

According to Rabbi Moshe Hillel Hirsch, the head of the large Slabodka yeshiva and a member of the Council of Torah Sages that runs Gimmel, Israel’s secular parties have breached all “red lines” and are currently engaged in battles against the haredi way of life on multiple fronts. Painting a picture of a community under siege, Hirsch claimed that if the “wrong government” is elected and Gimmel isn’t in the coalition, it is possible that “Judaism in Israel will change entirely.”

“They are trying to eradicate basic beliefs,” the rabbi declared.

Historically, very religious Jews largely vote in blocs for the same candidates and issues laid out by community leaders. But immigrants from English-speaking Western countries, known collectively as Anglos, have never truly voted as a bloc and tend to mirror their native-born counterparts, supporting parties based on personal ideology or sectarian affiliation. There is a stubborn streak among many Anglos, especially those from highly individualistic countries such as the United States, which leads them to sometimes subvert expectations.

This can create tension in more religious areas, where some voters feel caught between community duty and personal choices.

Encapsulating this issue during Saturday’s rally, Rabbi Yitzchok Berkowitz, head of a kollel (or an advanced Torah study institute) in Jerusalem, attacked Israelis for subverting democracy — before subsequently railing against the idea of individual choice.

“We come from a place where democracy is sacred, where Election Day is a holiday of democracy,” the American expatriate said. “The ballot is secret, a personal decision. Democracy here has taken on a whole different course, and that is whoever is in power has the right to make decisions for everybody, impose their values on everybody else.”

But as he continued, Berkowitz also framed the process of voting in collective terms, saying that to cast a ballot meant “standing up for the community.” 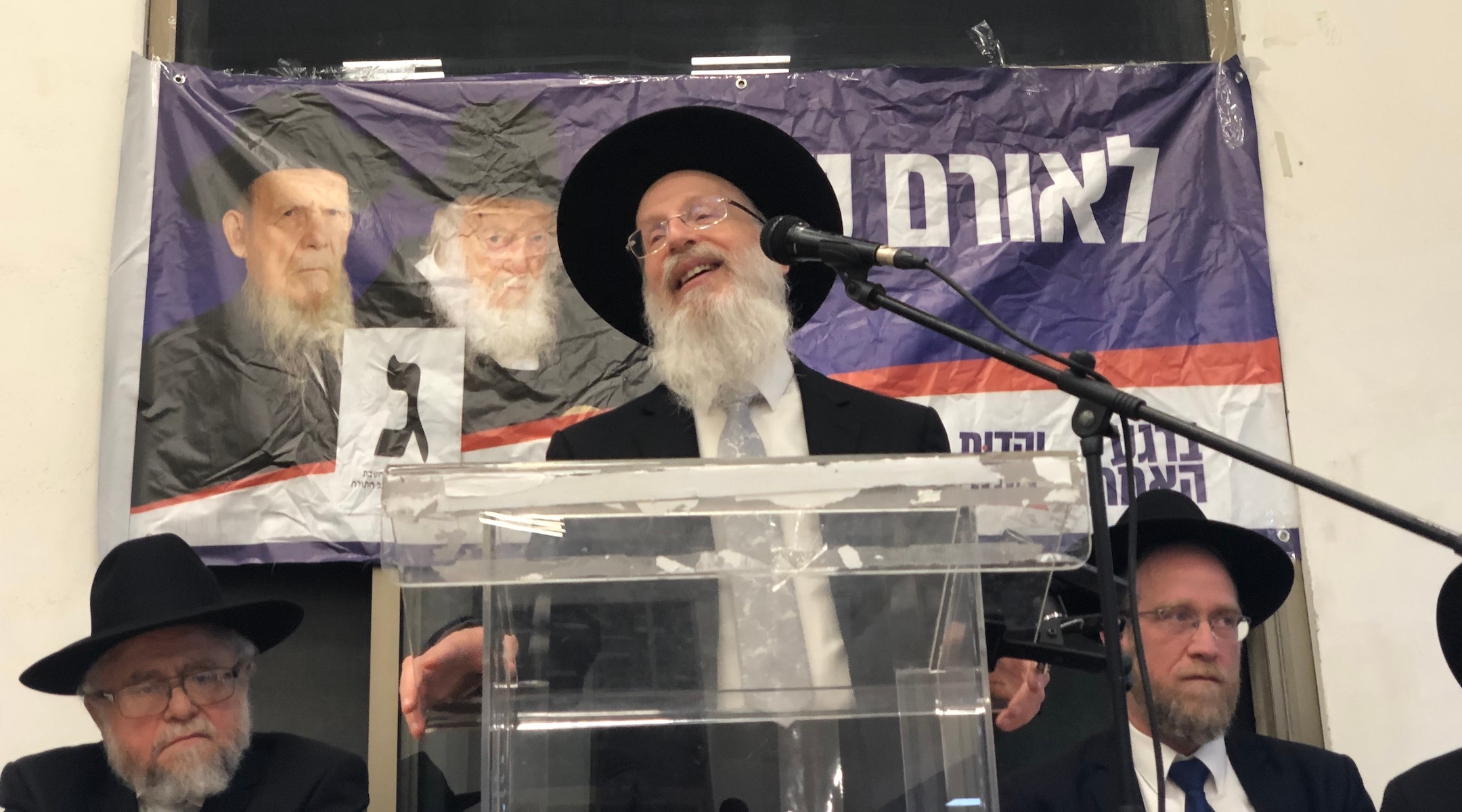 “I’m doing my best, doing everything I can to make people realize that this is not America and as much as in America, we vote for a person who is going to help me, but in Israel we are voting for a certain identity of what we believe in and what we think is right,” he said.

Others, however, are “less likely to vote for Gimmel because they don’t understand it,” Malinowitz said.

Beit Shemesh is one of Israel’s more conservative cities, and in last year’s local elections, its City Council was split among a number of religious and nationalist parties such as Likud, Jewish Home, Agudat Yisrael and Degel HaTorah. The city’s large Anglo population voted for various factions and no large English-speaking bloc emerged.

According to Rabbi Dov Lipman, a former national parliament member originally from Maryland, Anglo-Israelis are “all over the political map,” from the far left to the far right. Even in Beit Shemesh, which leans conservative, there is a 70-30 right-left split, he claimed, citing his impressions from interacting with local residents.

There is little research on Anglo voting patterns. Pollster Rafi Smith said that, despite that lack of data, it is safe to assume that many of the more recent religious American immigrants tend toward the political right.

However, that doesn’t always translate to support for religious parties. Last year’s mayoral election, in which the haredi incumbent, Moshe Abutbul, narrowly lost to national-religious candidate Aliza Bloch, showed that Beit Shemesh “has a strong number of haredim who don’t follow the old guard,” Lipman said. Bloch’s party is not haredi, and there was fierce opposition to it from the haredi establishment.

“I came to this country first identifying with the haredi community, and I started to see through the years that the biggest issue that I have with the haredi world is that there is only one path and there is no room for anything else,” one local Anglo who asked only to be identified as Yaakov told the Jewish Telegraphic Agency. “I believe in Torah before everything else, but I question the leadership and what their real intentions are for the community.”

“Does Gimmel care if I can afford a house or not? No. They care if I’m in kollel or not,” he continued. “Why did Hashem [God] give us free choice in the first place? To make the right choice. When somebody tells you you don’t have the right to choose, they are telling you they don’t believe in free choice, and that’s not the Torah.”

In Beit Shemesh there is even support for Benny Gantz’s Blue and White party, Prime Minister Benjamin Netanyahu’s main rival in the upcoming election, said party activist Miriam Friedman. A recent English-language election event for Blue and White drew a crowd of 50 people.

According to Stuart Schnee, a local activist for Netanyahu’s Likud party from the United States, one thing that defines Anglos is their “consumerism” — that is, English speakers showing a willingness “to shop around” politically.

“Anglos are really idealistic and want to know as much as they can about the policies,” Schnee said. “I’ve never heard an Israeli say ‘I want to see the party platform,’ but Anglos will always ask for it.”