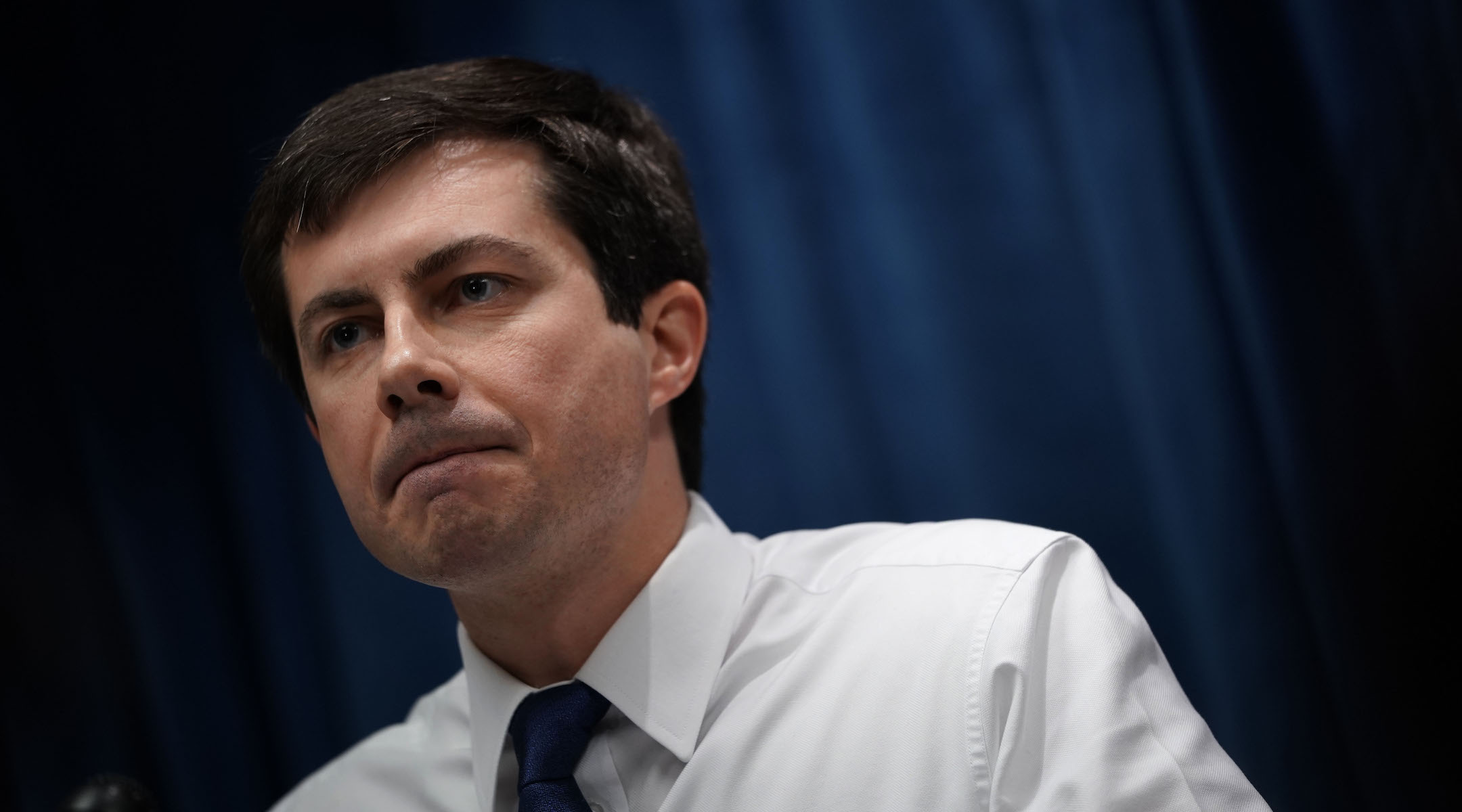 (JTA) — Pete Buttigieg has a word he likes to use to describe Vice President Mike Pence: “Pharisee.”

Jewish scholars would like him to stop doing that.

Buttigieg, the 37-year-old mayor of South Bend, Indiana, running a dark horse campaign for the Democratic presidential nomination, has advanced the idea of liberal candidates using religious language to talk about their values.

The flip side of that, Buttigieg says, is that Republican leaders don’t practice the religious values they preach. He takes particular aim at Pence, who often speaks of his own conservative Christian values while serving under President Donald Trump. Buttigieg has criticized Trump for paying off an adult film actress with whom he allegedly had an affair.

Buttigieg believes that reeks of hypocrisy, so he uses an age-old Christian metaphor for hypocrites: the Pharisees.

“There’s an awful lot about Pharisees in there,” Buttigieg told The Washington Post this week, referring to the New Testament while discussing Pence. “And when you see someone, especially somebody who has such a dogmatic take on faith that they bring it into public life, being willing to attach themselves to this administration for the purposes of gaining power, it is alarmingly resonant with some New Testament themes, and not in a good way.”

The Pharisees were one of several Jewish sects during the first century, the time of Jesus. They also include the rabbis of the Talmud and the creators of Rabbinic Judaism, the ideological ancestor of mainstream Jewish practice today.

But in Christian discourse, the Pharisees have taken on the role of “hypocrites, fools and a brood of vipers, full of extortion, greed, and iniquity,” wrote Amy-Jill Levine, a professor at the Vanderbilt University Divinity School, in an article in Sojourners magazine. That’s because the New Testament Gospels say Pharisee leaders criticized Jesus, and then lambaste them for hypocrisy.

“The teachers of the law and the Pharisees sit in Moses’ seat,” reads Matthew, chapter 23.”So you must be careful to do everything they tell you. But do not do what they do, for they do not practice what they preach.”

Buttigieg repeated that idea in an appearance last month on ABC’s “The View,” again right after talking about Pence.

Pence, the former governor of Indiana, responded to Buttigieg’s criticism in an interview Wednesday with CNBC.

“He said some things that are critical of my Christian faith and about me personally. And he knows better. He knows me,” the vice president said.

Although almost no Jews describe themselves as Pharisees today, the word is still anti-Semitic because it refers to Jews, said Rabbi Danya Ruttenberg, an author who has criticized Buttigieg in the past for using the term. She compared it to a kid on a playground using the word “gay” as an insult. Even though the kid may not be referring to sexual orientation, Ruttenberg said, using the word in a negative light still perpetuates homophobia.

“When you use that as an insult, you’re saying that Jews are bad,” she said. “It perpetrates anti-Semitism: Jew as bad guy, as Christ killer, is one of the ways people have justified murder and pogroms and the Inquisition and the Holocaust for centuries.”

Over the past two millennia, people have also described the Pharisees as money and power hungry, said Sara Ronis, an assistant professor of theology at St. Mary’s University in San Antonio. Those traits were appended to the Pharisees over time, she said, in part because they are common anti-Semitic tropes.

Ronis added that many modern depictions of Pharisees show them in striped shawls — what many Jews would recognize as the tallit, or Jewish prayer shawl.

“So many textbooks trace Rabbinic Judaism to the Pharisees,” she said. “Using that language as a negative slur today, when I think so many people have this stereotype … the associations people have unconsciously between that and Jews certainly doesn’t help with modern stereotypes around Jews and money and control and secret power.”

Chris Meagher, Buttigieg’s national press secretary, said in a statement to the Jewish Telegraphic Agency that “Pharisee” is a common expression for hypocritical leaders.

“The Mayor expressed his concern about the hypocrisy on the part of evangelical leaders,” Meagher said in the statement. “He invoked this Biblical reference, since it is commonly used to show skepticism of hypocritical establishment leaders. That was the way he intended it.”

Buttigieg has criticized Pence in the context of his calls to build a religious left-wing movement to counter the religious right. He says that his religious values — of caring for the poor and helping the stranger — track with liberal policy.

“I do think there are the stirrings out there in our country right now of a religious left that understands that living your faith might also have to do with paying more attention to those most in need and not celebrating those who already have the most wealth and the most power,” he said on “The View.”

That’s similar to what a lot of liberal rabbis have been saying for a while. A range of major Jewish organizations tend to take liberal positions on domestic issues, and the Reform movement, American Judaism’s largest denomination, is vocally left wing on a broad spectrum of issues.

Orthodox groups have tended more to the right, and earlier this year two major Orthodox groups spoke out against a New York law that liberalized abortion policy. But the major American Jewish denominations have found consensus on some issues, like Donald Trump’s 2017 travel ban, which all opposed, and last year’s family separation policy.

Other prominent liberal Democrats, such as the presidential candidates Cory Booker and Elizabeth Warren, have talked about their Christian faith on the campaign trail.

Rabbi Jill Jacobs, the executive director of T’ruah, a liberal rabbinic human rights group with 2,000 member rabbis, said Buttigieg need only look to the Jewish community for an example of a religious left.