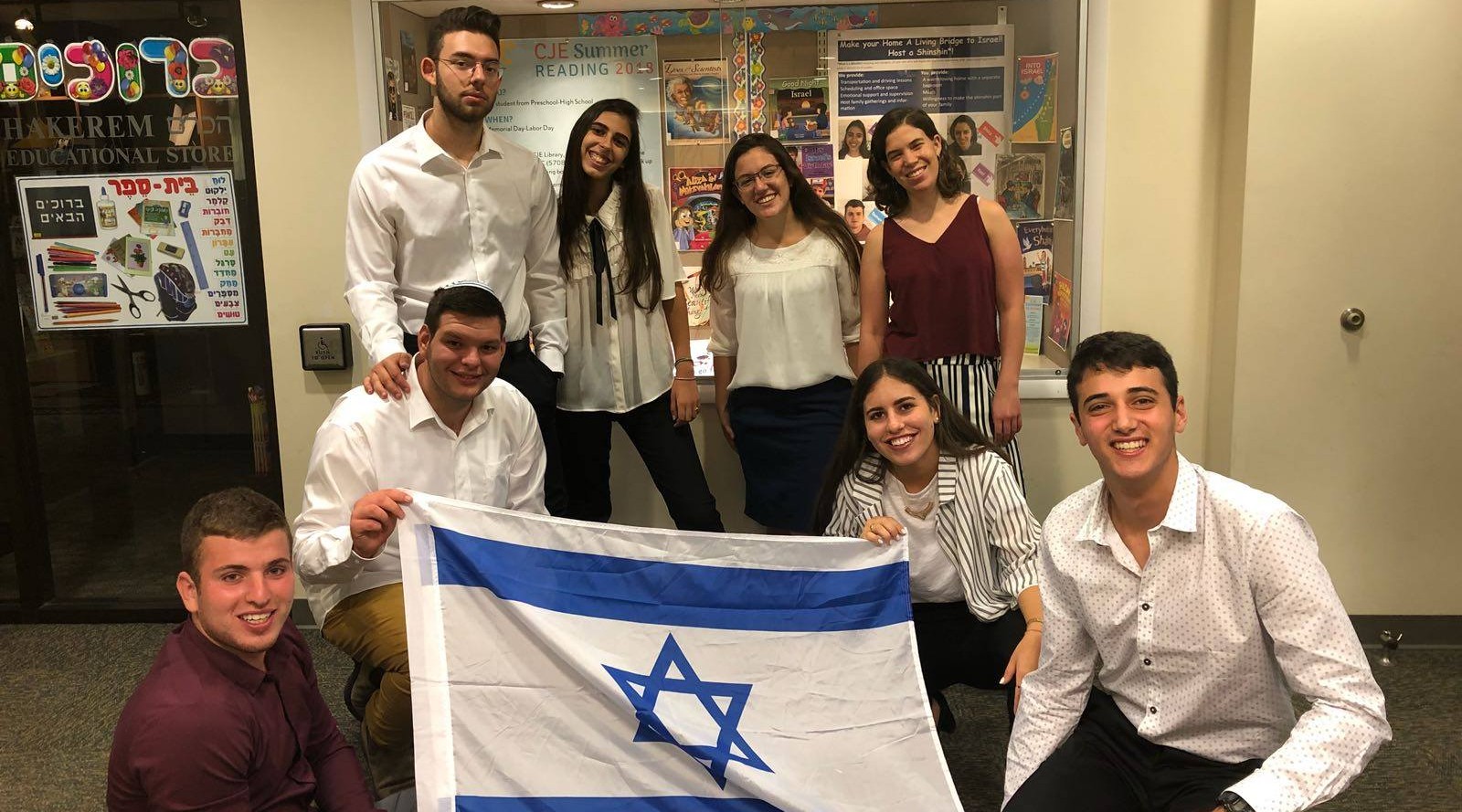 Native Israeli Merav Edrei gained a new appreciation for her new home in Michigan, of all places.

She and her husband, Yonatan, moved to the Detroit area nearly four years ago to become shlichim, Israeli emissaries to Diaspora Jewry. Edrei teaches Hebrew to grades 2-12 at the Farber Hebrew Day School-Yeshivat Akiva in Southfield. Yonatan works with the community’s youths as an emissary for the Orthodox Zionist youth group Bnei Akiva.

The experience, Edrei said, has made her appreciate both the proactive way Diaspora Jews approach Judaism and Israel’s Jewish culture back home.

“Living as a Jew and an Israeli outside Israel has given me so much perspective,” Edrei said. “In America, Jewish education is expensive, and it’s not easy for schools to bring us here to teach. But they choose to do it because they want to feel this connection with Israel.

“It made me look at Israel in a wider way. I’ve learned a lot about my own relationship to Israel and my place in the wider Jewish world.”

The Edreis, who will be returning to Israel this summer, are among the hundreds of Israelis serving as emissaries in North American day schools. Some emissaries work as teachers, while others provide education more informally in places like synagogues, Jewish community centers and youth groups.

The idea behind this army of emissaries is for Israel to share some of its Jewish vitality, Zionist ethos and Hebrew with Diaspora Jews, and to create personal connections between American and Israeli Jews.

“The shlichim serving in the U.S. bring an Israeli spirit to families that may not have visited Israel and don’t meet Israelis on a regular basis,” said Amalia Phillips, director of Israel and Overseas Education at the Macks Center for Jewish Education in Baltimore. “They nurture connections and serve as a bridge between our respective communities.”

The emissaries consist of families, young adults and even Israeli teenagers doing their national service, or sherut leumi — an alternative to military conscription for religious girls and some boys. Depending on individual circumstance, funding may come from the Jewish Agency for Israel, Israel’s National Service program, the World Zionist Organization, North American Jewish federations, or individual U.S. Jewish institutions or communities.

In any given year, the Jewish Agency, which is responsible for the bulk of the shlichim, has some 1,500 to 1,700 emissaries deployed worldwide. 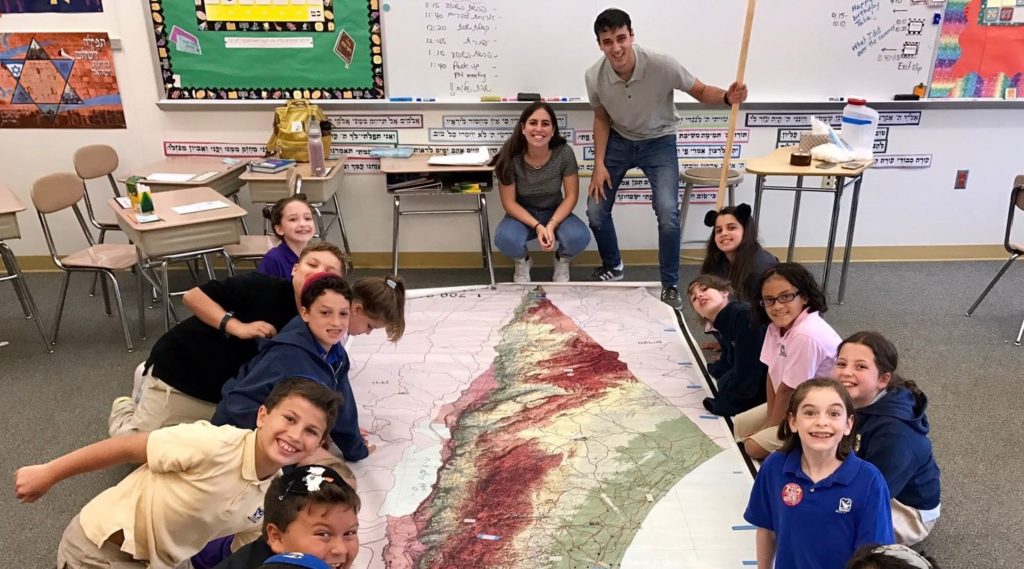 Israeli emissaries Yael Israeli and Yonatan Kantarowicz, rear, do a hands-on Israel activity at the Beth Tfiloh Dahan Community School in Baltimore. (Courtesy of the Center for Jewish Education)

The Ben Porat Yosef day school in Paramus, New Jersey, employs 10 Israeli emissaries. They teach religious subjects completely in Hebrew, even to preschoolers, as part of a Hebrew-first approach meant to give kids Israeli-accented Hebrew fluency at a young age.

“We tell them to not speak a word of English,” head of school Rabbi Saul Zucker said of the shlichim. “We believe in total immersion.”

Even in a school with so many emissaries, there can be some challenges.

The Israelis are accustomed to Israel’s highly structured curriculum and mostly frontal approach to learning, and must learn to adapt to the different style of American day schools, said Chagit Hadar, the school’s Judaic studies principal.

In Israel, the Jewish studies curriculum comes from the Education Ministry, whereas in American Jewish day schools, “there’s a lot more variety in what’s taught and how it’s taught. Sometimes there aren’t set tools. So they need to create their own,” she said.

Emissaries Yiska Klein and her husband, Yishai, are completing their third year at Ben Porat Yosef. Klein, who teaches Hebrew, said she loves the amount of freedom she is given.

“We can really be creative inside and outside the classroom,” she said.

During the school’s “Hebrew Day,” for example, students rotated through a variety of Hebrew-language teaching stations. In one classroom, the students sang Hebrew karaoke. In another, they participated in a Hebrew play. In others they played Hebrew Scrabble or learned about Eliezer Ben-Yehuda, the father of modern Hebrew.

Ohr Chadash Academy in Baltimore has several “shinshinim” – the acronym by which Israeli National Service girls are known (the name comes from “shnat sherut,” meaning “year of service”).

Shira Avital, 18, is one of them. She and another shinshin work with preschoolers through eighth-graders to improve their knowledge of Israel and Hebrew, and launched a Zionist youth club for middle schoolers that meets every other Saturday night.

“The idea was to create more Israel-oriented programming for kids who really want to be there outside of school hours,” Avital said. 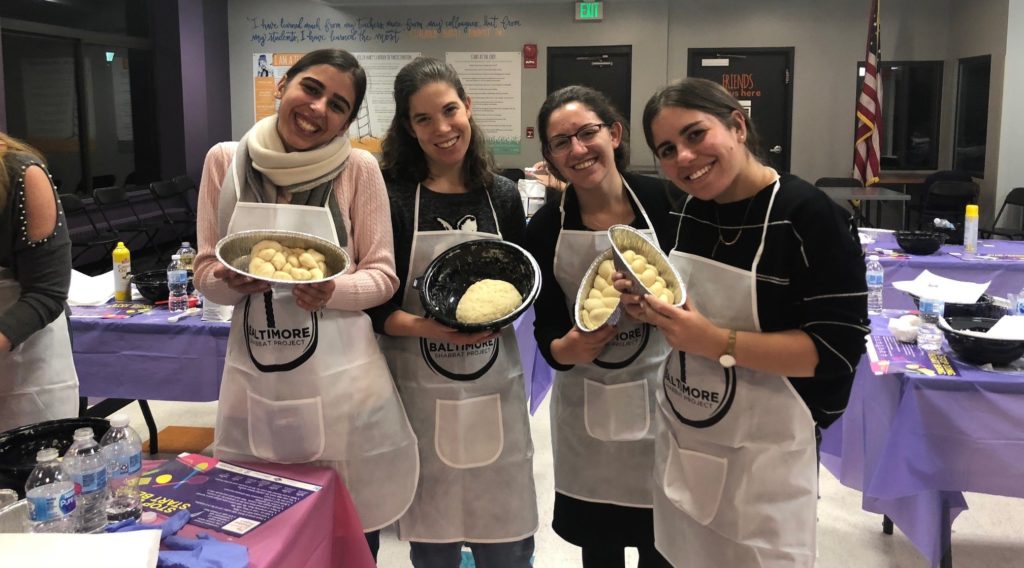 As part of their national service, many young Israeli women spend a year in the United States as Zionist emissaries in Jewish day schools. (Courtesy of the Center for Jewish Education)

The emissaries also send a monthly Israeli newsletter for students and their families that includes riddles, short quizzes and a color-by-Hebrew-letter drawing exercise for younger students. A section for middle schoolers includes articles about famous Israeli figures like founding prime minister David Ben-Gurion and the late astronaut Ilan Ramon.

“We really dedicate a lot of time to thinking and planning programs,” Avital said. “We meet with the kids and understand what they want.”

Rabbi Moshe Margolese, principal of Ohr Chadash Academy, said the shinshinim have helped shift the school’s mindset on Israel education, making it much richer and more varied. The emissaries’ touch is everywhere, he said.

“They’ve created lunch placemats with Israeli trivia and labeled everything in the hallway in Hebrew: desk, door, bulletin board,” he said. “They’re teaching without taking away from class instruction time.”

“These are young adults who are openly proud to be Jewish. They infuse the atmosphere with a love of Torah,” he said. “They’ve had a considerable impact on our students’ education.”

In Fairfax, Virginia, community emissary Noy Peri divides her time between a local synagogue and the pluralistic Gesher Jewish Day School. She recently organized an activity related to Israel’s 1976 rescue of the kidnapped Jewish hostages in Entebbe.

“This isn’t an event that many American kids know about, but it was one of Israel’s biggest military operations and I thought it was important to talk about it,” Peri said.

When she works with young students at the school, Peri does interactive activities like create puzzles with pictures from big moments in Israeli history. For older kids, she recently did a class about Mizrahi music in Israel and taught how Mizrahim — Jews from North Africa and the Middle East — had to struggle against the dominant Ashkenazi culture to get their songs played on the radio.

The goal, Peri said, is to teach students “not just to love Israel, but to know Israel.”