Ukraine’s next president is a Jewish comedian 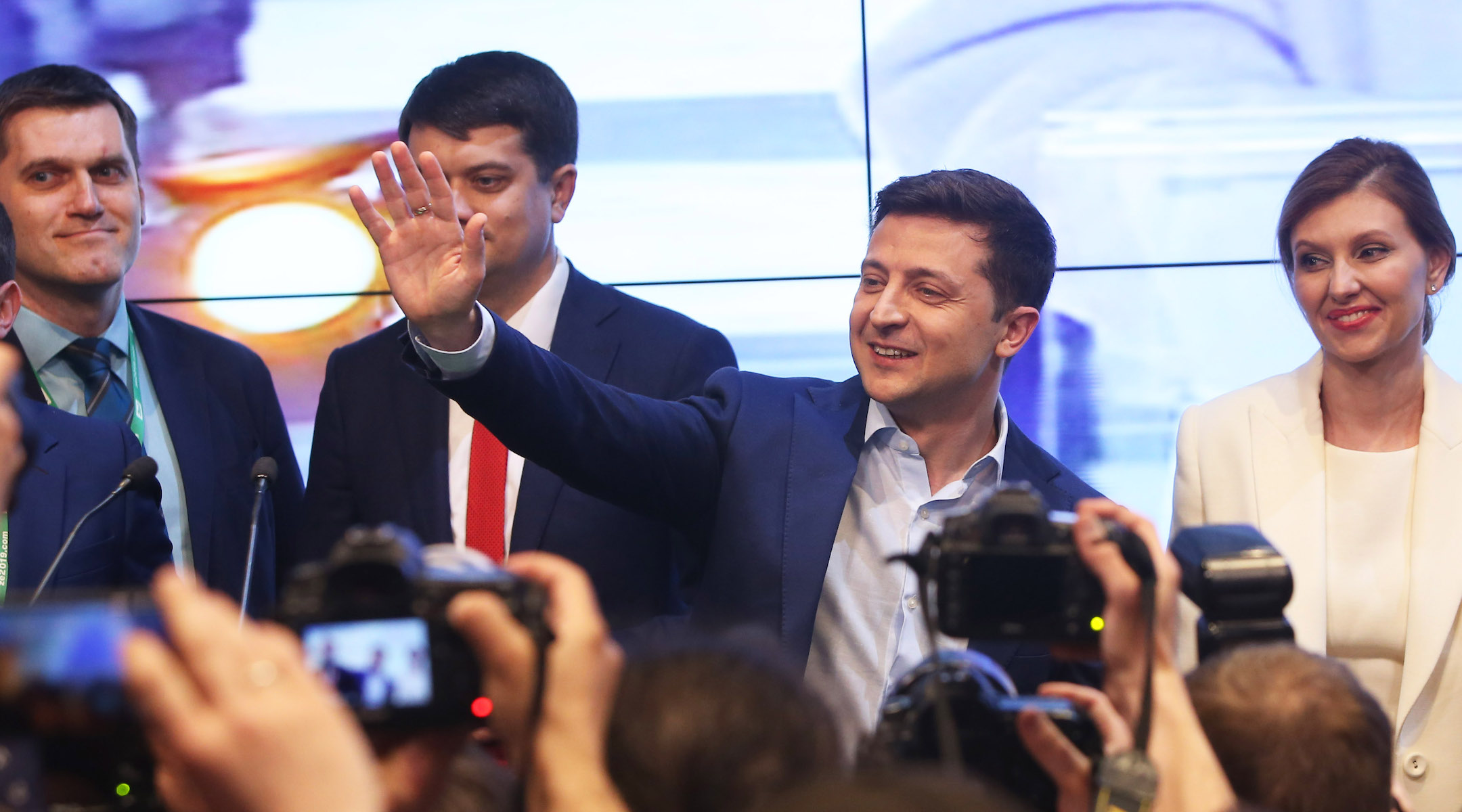 (JTA) — If official exit polls from Ukraine’s presidential elections are to be believed, that country is set to become the only one in the world besides Israel whose president and prime minister are both Jewish.

Comedian Volodymyr Zelensky’s dramatic lead in exit polls Sunday — in many of them he received more than 73 percent of the vote — was so overwhelming that it prompted a concession of defeat by incumbent Petro Poroshenko even before the official results were in, Radio Liberty reported.

If Zelensky is sworn in as president, his prime minister — at least for a while and possibly until the parliamentary elections scheduled to take place sometime later this year — will be Volodymyr Groysman, a Jewish politician who was the mayor of the city of Vinnytsia.

To some of Poroshenko’s critics, the landslide success of the vague campaign by the politically inexperienced Zelensky was not surprising in light of widespread resentment over the persistence of corruption under Poroshenko, who was elected in 2014 on a platform that vowed remedial action on exactly that front.

More unusual to some, however, was how Zelensky appears to have won the elections so decisively in spite of how his Jewish ancestry – his mother, Rima, is Jewish, and he has jokingly referred to this during the campaign — is well known in Ukraine.

After all, Russia and other critics claim Ukrainian society has a serious anti-Semitism problem and legacy.

“Imagine, a pure-blooded Jew with the appearance of a Sholom Aleichem protagonist wins by a landslide in a country where the glorification of Nazi criminals is enacted into law,” Avigdor Eskin, a Russian-Israeli columnist, wrote in an analysis published earlier this month by the Regnum news agency.

Eskin in the column on Zelensky downplayed allegations of widespread anti-Semitism in Ukraine, attributing much of the attention to the problem in the media and beyond to propaganda by Russia, which is involved in an armed conflict over territory with Ukraine.

But Eskin’s statement about Ukrainian laws glorifying Nazi criminals is not inaccurate, and Russia is not alone in criticizing Ukraine over this and other issues connected to anti-Semitism.

Last year, Israel’s government in its annual report on anti-Semitism singled out Ukraine as a regional trouble spot.

Also last year, more than 50 U.S. Congress members condemned Ukrainian legislation that they said “glorifies Nazi collaborators” and therefore goes even further than Poland’s controversial laws limiting what can be said about local complicity during the Holocaust.

“It’s particularly troubling that much of the Nazi glorification in Ukraine is government-supported,” a letter signed by the U.S. lawmakers said.

The letter noted ceremonies, gestures and legislation venerating leaders of the UPA and OUN militias, who fought alongside Nazi Germany during World War II and whose troops participated in atrocities against Jews and other victims.

Poroshenko’s government greatly encouraged glorification of those troops and leaders as fighters for Ukrainian freedom who it insisted sided with Germany only in order to fight against the Russian-controlled Soviet Union.

Several cities across Ukraine named streets for the Nazi collaborator Stepan Bandera, who prior to Poroshenko’s time in office was openly glorified only in the country’s west.

Meanwhile, in the western city of Lviv, nationalists became emboldened enough to celebrate — with the permission of city authorities — the anniversary of the 14th Galician division of the Waffen SS. The anniversary events featured men parading in Nazi SS uniforms on the street.

Such sights would have been unthinkable under Viktor Yanukovych, the corrupt president who was deposed in a 2013 revolution that ended with Poroshenko’s election. Careful to alienate neither ethnic Russians in Ukraine nor its powerful neighbor to the east, Yanukovych was less tolerant of this nationalist phenomenon.

On this subject, Zelensky has said only that he personally does not favor the veneration of people like Bandera, whom he described as “a hero to some Ukrainians.” It was a markedly reserved formulation compared to the endorsement of figures like Bandera by officials under Poroshenko.

The presidential campaign itself has featured some anti-Semitism.

In some far-right circles, Zelensky’s work for a television station owned by the Jewish billionaire Igor Kolomoisky was proof of his belonging to a “Jewish cabal.” But it made Zelensky popular with other nationalists who appreciated Kolomoisky’s reputation as a fiery patriot.

Alexander Paliy, an influential political analyst supporting Poroshenko, stirred controversy last month when he wrote on Facebook that, despite his “respect” for Jews and some Russians, “The president of Ukraine should be Ukrainian and Christian, like the absolute majority of Ukrainians.”

Such rhetoric is shocking to many of Ukraine’s some 300,000 Jews, whose ancestors suffered murderous anti-Semitism in Ukraine for centuries before, during and decades after the Holocaust.

The French-Jewish philosopher Bernard-Henri Levy also referenced Ukrainian Jews’ bloody history in an interview with Zelensky, the 41-year-old son of scientists who lived near major Soviet army bases in Ukraine.

“His Judaism. It’s extraordinary that the possible future president of the country of the Shoah by Bullets and Babi Yar is a self-affirmed Jew from a family of survivors from Kryvy Rih near Dnipro – the land of pogrom if ever there was one,” Levy wrote in an article published earlier this month in Le Point. “This postmodern kid, is he new proof that the virus of anti-Semitism has been contained” after the revolution, Levy added.

Not denying his Jewish ancestry, Zelensky declined to explore it at length in the interview, Levy wrote. On this subject, he replied with typical self-deprecating humor, telling Levy, “The fact that I am Jewish barely makes 20 in my long list of faults.”

Zelensky has ingratiated himself with the Ukrainian public with such jokes as the star of “Servant of the People” – a primetime television show where he portrays a teacher thrust by an unlikely chain of events to become Ukraine’s president. He announced his candidacy in January, becoming an instant favorite.

This popularity has allowed Zelensky to win on an unusually vague platform and distinguish himself from his professional politician rivals, with their proclivity to hyperbole and nationalist slogans.

For example, when a reporter asked him how he would deal with Russian President Vladimir Putin, Zelensky reverted to his comic roots, saying “I would speak to him at eye level.” It was a reference to him and Putin being at least three inches shorter than Poroshenko, a 6-footer.

Zelensky’s opaqueness means a high level of uncertainty, according to Eduard Dolinsky, the director of the Ukrainian Jewish Committee.

“We will need to wait and see what kind of president Zelensky turns out to be,” said Dolinsky, who was an outspoken critic of some policies of the Poroshenko administration. “What is clear is that Poroshenko’s attempt to appeal to nationalism has failed. Ukrainians said they wanted change. And I am feeling optimistic.”